Reverb, whether utilized sparingly or in thick layers, is the glue that keeps a mix together in music production. Reverb possibilities were limited back in the day. Physical plates like the EMT 140, spring reverbs like the AKG BX20, and even actual chambers — odd-shaped rooms with reflective walls and loudspeakers and microphone arrays — like Capital Studios’ chambers, which were erected 30 feet below ground for isolation from noise from the outside world! Then, in the 1980s and 1990s, when digital hardware reverbs like the EMT 250/251 first arrived in studios, they came with exorbitant price tags (2–3 times the cost of a car), limiting their use to serious professionals. Thankfully, today’s musicians have access to a vast array of high-quality reverbs that are available as inexpensive software, many of which are modeled after the aforementioned rarefied beasts. However, with so many options, finding the ideal reverb or reverbs for your home studio might be difficult than room reverb.

It’s worth noting that reverb plugins effectively duplicate whatever is sent into them, so if you’re sending in something that’s lacking, you’re simply doubling the problem. In that sense, while reverb can be used to “conceal” things, it cannot be used to “repair” them like a eq section. You’ll notice that the pieces of your mix will live more amicably with one another once you realize this and use reverb software plugins as a tool to establish separation between elements (as well as provide character and tone to tracks). The FabFilter Pro-R is a comprehensive plug-in capable of solving a variety of reverb jobs, with a sophisticated retina interface, breathtakingly realistic algorithms, and thorough tweakability. You’ll be impressed by FabFilter Pro-pristine R’s sound quality and intuitive controls, which provide ample visual feedback via a real-time spectrum analyzer to assist you in shaping the reverb tones, whether you’re adding a natural sense of space to a stripped-down performance or crafting densely textured ambience. Intelligent stereo width, brightness, character (for adding modulation), and mix control are among the numerous features of the FabFilter Pro-R, which has a lock feature that lets you to surf presets without changing your current mix setting. Furthermore, both the decay rate and the post-effect EQ have 6-band FabFilter Pro-Q-style control types of reverb.

Plate reverbs are one of the most commonly utilized effects in the audio world, and they come in a variety of shapes and sizes. A good reverb has a natural sound and fits in well with the rest of the mix. Simultaneously, it should not perplex you with overly sophisticated controls, but rather be simple to set up and operate. FabFilter Pro-R comes to the rescue.

FabFilter Pro-R takes a melodic approach to spring reverb, with user-friendly, non-technical settings like Brightness, Character, and Distance allowing you to get the reverb sound you want without needing a reverb science degree. The stepless Space control allows you to fade between dozens of various, finely tuned room models, with the decay duration automatically selected for a natural sound.

One of the important components of a room’s reverb character is its decay period, which varies widely across the frequency range. To emulate this, FabFilter Pro-industry-first R’s Decay Rate EQ approach allows for entirely unfettered decay time modification over the frequency spectrum. It allows far more flexibility to customize the decay time features because convolution reverbs uses parametric EQ bands instead of a standard crossover scheme. Designing reverbs of any type or character has never been easier thanks to the included 6-band Post-EQ.

Of course, you get all of the usual FabFilter extras, such as perfectly tuned knobs, interactive MIDI Learn, undo/redo, and A/B switch, Smart Parameter Interpolation for smooth parameter transitions, an extensive help file with interactive help hints, sample-accurate automation, advanced optimization, and more! This is the Best Reverb Plugin in 2022. 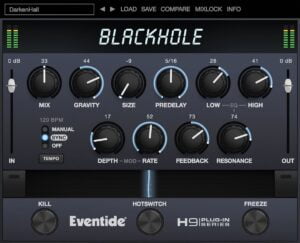 Eventide makes some of the best reverb vst plugins for music producers, with the blackhole reverb being a favorite among many. Blackhole provides a deep richness to the sound by simulating virtual worlds that could never exist in reality. Guitars, strings, pads, and vocals work well with the plugin. Adding a few drops to the drums gives some depth as well.

The Eventide Blackhole reverb plug-in is a unique creature. The Blackhole plug-in is based on the “Blackhole” preset from the classic Eventide Space reverb pedal and is designed to create weird soundscapes, cascading delay effects, and infinite reverbs. Blackhole is the reverb to utilize when your project calls for a bit of chaos or dreamy atmospherics, and its distinctive ribbon strip, which you can use to blend and morph Blackhole’s multiple properties, makes it one of the most interactive reverb plug-ins around!

Crystalline, a plugin that also acts as a love letter to the most popular algorithmic reverbs throughout the history of music creation, maintains Baby Audio’s winning streak. With their digital reverb hardware devices, companies like Lexicon and EMT blazed a trail, and Baby Audio adapted concepts from these pieces to cram Crystalline with astounding current features.

When it comes to reverbs, there are two main schools of thought: One aims to imitate the sound of real physical space, while the other strives to build an artificial environment using an algorithm that is not bound by the natural world’s limits. The concept of an algorithmic reverb was first proposed in the 1960s, and it has grown over the years, reinventing the sound of modern music with each new technological advancement.

Crystalline continues the legacy of classic algorithmic reverbs, but with to modern computer power, it adds additional capabilities and improved fidelity. It’s supposed to sound surreal — in the best sense of the word. Its rooms and hallways will not sound like those in your home, but rather like those in your dreams!

Crystalline was designed to push the boundaries of realistic-sounding reverb in a stylish way. I can almost feel how it would feel beneath my fingertips if it were a genuine desktop hardware unit, thanks to the stunning GUI. Start and end times that are synchronized with the BPM. Crystalline allows you to sync the reverb attack and decay time to the beat of your DAW.

Within the reverb algorithm, the “sparkle” parameter prioritizes high frequencies. This produces naturally brighter reflections, which will help you obtain that extra shine on sources like vocalists or the snare drum. When the dry/incoming track is playing, there’s a handy “ducker” option that decreases the reverb signal. The ducker creates a cleaner mix, allowing you to increase the reverb without muddying the dry track.

When setting up Crystalline for the first time, keep in mind that it wasn’t designed to work like a regular reverb. It’s almost more of a production tool than a mixing tool in my opinion. It can produce unearthly noises, so don’t limit yourself to utilizing it to create merely a familiar room sound or atmosphere.

Soundtoys Little Plate is a beautiful reverb influenced by the EMT 140 hardware reverb units. Little Plate’s controls are quite basic natural sounding, and unlike the original plate unit, which had a 5-second decay limit, it runs all the way to infinity to create totally unique sonic landscapes like impulse response. A low-cut filter is also included to minimize the reverb from muddying up the mix. Finally, the Mod switch on Little Plate adds some modest modulation (e.g., a little ‘chaos’) to the end of long decay tails.

The EMT 140 vibrates a huge sheet of metal with a magnetic transducer, sending the result to the engineer via a pickup that collects the ensuing reverberation. In 1957, the EMT 140 was introduced, and it was capable of dense and smooth reverberation unlike anything the world had heard before. Even though it doesn’t sound exactly like a genuine room, plate reverb has its own charm, which is why it’s still a popular sound many decades later. However, 140s are becoming increasingly difficult to come by, and replacement components are even more difficult to get by. They’re also out of reach for the ordinary studio due to their size and weight.

The LX480 Complete reverb plug-in from Relab Development is an astonishingly realistic reproduction of one of the most popular hardware digital reverb units ever created. LX480 Complete delivers all of the traditional algorithms — the shimmering plates, dazzling halls, speedy rooms, and fantastic twin delay — using the same time-based technology as the original machine. However, Relab Development has added features like continuous controls, more early-reflection delay lines, enhanced filters, and stereo manipulation to the original machine to match the needs of modern musicians.

For decades, the 480 has served as the gold standard against which all other best reverb plugins on the market have been measured. Ask any professional, and they’ll tell you that the 480 is one of the best-sounding reverbs ever created. Nothing compares to the unique, smooth, and rich “480 sound.” To learn more about the Relab LX480 Complete, click here. Even as an algorithmic reverb, Softube’s TSAR-1 is incredibly adaptable. This contemporary reverb will provide us any reverb sound we choose, from light and colorful to dark and dismal, otherworldly to wonderfully natural. The user interface of this feature-rich plugin is evocative of early digital hardware equipment. Its interactive display allows us to dial in the exact reverb we want or choose from a variety of great presets.

The TSAR-1’s magic comes from the True Stereo Algorithm within. Its strength is in its refined tone and versatility; whether employed on strings and brass, rock percussion, or lead vocals, it always shines. All of this while maintaining an unrivaled comprehensive and user-friendly interface in other high-end reverb devices.

The TSAR-1 was created with simplicity in mind. We provided the user interface five sliders and a couple of switched options instead of a plethora of controls. However, you may discover that you never need to utilize even these basic controls. Because we’ve provided a large library of settings that will cover the majority of your requirements. The presets are clearly labeled according to their intended function, so pick one you like, modify it a little, and you’re ready to go.

Pre-delay, time, density, tone, high-cut (low-pass) filter, diffusion, and mix are all adjustable parameters of the TSAR-1. The plugin’s modulation provides excellent vintage chorus and current movement. Early reflection categories (big, medium, or tiny rooms) are included in the algorithms, and these reflections can be mixed into the signal in any way we see fit.