Ambient VST plugins are audio plugins that create atmospheric sounds and are frequently used in ambient music and sound design. An ambient sound is a form of background noise that is often utilized to relax or soothe people. Rather of producing high-frequency sounds, ambient plugins are usually designed to generate soundscapes or textures.

Atmospheric noises, pads, and leads are the most commonly employed sounds in these music genres. Aside from that, you can add texture, background noises like rain, foleys, drones, and soundscapes to your mix. Pianos, guitars, strings, and percussions help to create atmospheric vibes and round out your composition. When it comes to effects, the most commonly employed are reverb and delay, which produces a vibe for faraway sounds and drags your pad and ambient tones even further.

Ambient sound plugins give an extra layer of sound to a track. From a simple echo to a complicated modulation effect, the sound can be anything. To create an unobtrusive sound, the most typical method is to combine random noise and reverberation effects. Ambient plugins are software plugins that work with digital audio workstations (DAWs). They can be used for a variety of things, including creating soundscapes and textures, as well as processing and adding effects to audio. Iris 2 is currently one of the best ambient VST available. This is a sample-based synthesizer with a spectral modulator built in. This allows you to enter samples and then filter frequencies from each one to create your own sounds. Iris 2 is a professional-level music creation tool that produces high-fidelity sounds. Its personality can be as unique as you want it to be. That’s what Iris is all about: using spectral sampling to create your own unique sounds.

Create and listen to new musical sounds that you’ve never heard before. Iris 2 is a powerful sample-based synthesizer that combines the power of a sampler with the flexibility of a modular synth and the fun of spectral filtering. Choose from hundreds of skillfully produced Bass, Keys, Leads, Pads, and Rhythmic patches to get started quickly. Then use an 11 GB factory collection of fascinating audio samples, a sophisticated modulation system, traditional filters, evocative effects, and more to tweak or construct your own patches. Iris 2 opens up a whole new universe of musical possibilities.

Iris is a cutting-edge sample-based synthesizer that lets you produce musical sounds like you’ve never heard before. Begin by stacking up to four separate audio samples, then highlighting the most intriguing spectrum characteristics with the spectrogram display and selection options.

Are you still starving for more? Apply iZotope’s world-class effects to your project to add attitude, dimension, and depth: chorus, reverb, delay, distortions, filters, and more. Alternatively, use a simple single-click-and-drop assignment mechanism to modify over a hundred parameters.

Baby Audio Crystalline is a daring attempt to modernize reverb by avoiding traditional reverb algorithms. The end result is a reverb plugin that employs whole new algorithms and fully utilizes modern CPU power. Traditional reverb plugins typically prompt users to select from a variety of reverb reflections, such as a vast hall, a tiny chamber, and so on. Crystalline is different in that it allows users to modify the size, sparkle, and width of the reflections.

While this may appear to be a drawback for some customers, Crystalline’s Baby Audio’s superb UI more than compensates. The user interface is extensive, dividing the controls into four sections: reflections, clean-up, depth, and form.

This plugin’s technology and methodology are entirely new, and it does not resample or mimic any classic reverb algorithm. This means that this plugin takes advantage of modern CPU power to deliver a robust and versatile reverb effect. It has a three-dimensional graph that depicts a reverb spectrum analysis over a short period of time. Furthermore, the controls are well-organized and include illustrations that explain what each control does. Finally, the user interface may be resized and is available in both dark and light settings.

It has a three-dimensional graph that depicts a reverb spectrum analysis over a short period of time. Furthermore, the controls are well-organized and include illustrations that explain what each control does. Finally, the user interface may be resized and is available in both dark and light settings. Baby Audio Crystalline includes a big preset library with effects that are exclusive to this plugin. It’s uncommon for reverb plugins to have a vast preset collection. This distinguishes Crystalline from the competition.

With Crystalline, Baby Audio established themselves as a pioneer. This plugin is one of the few recent reverb tools that was designed from the ground up and uses entirely new algorithms. As a result, it’s one of the most adaptable reverbs available. This is the best Ambient plugin in 2022. 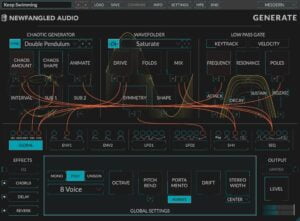 With Generate, you can take Chaos to the next level. Generate, a flagship polysynth developed by Newfangled Audio, combines five novel chaotic oscillators with all the capabilities you’d expect in a first-class synthesizer. Beautifully complicated pads, warm flowing keys, twitchy sequenced basses, out-of-control leads, and ‘oh my God’ textures are all possible.

Generate is built on a collection of chaotic generators. Underlying patterns, interconnection, continual feedback loops, repetition, self-similarity, fractals, and self-organization can all be found in what appears to be randomness. Each of Generate’s eight chaotic generators draws out these underlying patterns and provides an oscillator that can gently fade from a sine wave to absolute chaos, with a lot of space in between. Distortion, harmonics, grunge, static, and noise are among the musical textures created, all of which can be manipulated predictably or unpredictably.

The chaotic generators in Generate are routed through one of three wave folders: Buchla, Animated, or Fractal, each with its own set of overtones. Then there’s a low pass gate influenced by Don Buchla’s ideas. These components work together to create a dynamic and musical voice with a distinct personality. The voice of Generate is followed by an unrivaled EQ, Chorus, Delay, Reverb, and Limiter, all designed to shoot your crazy sounds into space or straight into the faces of your listeners. 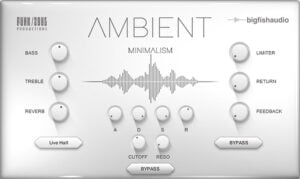 Big Fish Audio’s ambient plugin has earned a lot of praise from composers, producers, and sound designers, and for good reason.

Ambient Minimalism is a one-of-a-kind phrase and texture-based virtual instrument that lets you create unique and expressive ambient soundscapes, cinematic cues, and backing tracks quickly and effortlessly. Each Ambient Minimalism instrument patch includes a variety of sounds, including humorous guitar effects, vocals, custom-generated pads, and more, giving you a wide selection of musical features and themes to work with.

Big Fish Audio Ambient Minimalism The Dark Side is another version of this plugin. This is a dark mode version of the plugin, featuring sounds that are darker, more cinematic, more theatrical. Creepy pianos, detuned glass, Wurlitzer, and sinister horns are among them.

There are a lot of sounds in the Ambient Minimalism plugin. These are all well-recorded and in the same key, allowing users to mix and match any sounds they like to make beautiful songs. Users are given with 12 key switches (red colored) that they can use to modify the key of the music element of their choice, in addition to the fact that the samples on this plugin were all recorded in the same key.
Integration of Komplete Kontrol and Maschine

Ambient Minimalism was created to work in tandem with Komplete Kontrol and Maschine, giving you a really unique hands-on experience. To quickly operate the interface, you can use the controls of any NKS-compatible device. In conclusion, this is yet another synth library geared toward creating ambient sounds. It features some of the most stunning vocal samples as well as cinematic ambient pads. If you’re new to the field of ambient music composition, Big Fish Audio’s Ambient Minimalism is a great place to start.