The process by which chiptune was initially created gives it its name. To create unique sounds, chiptune enthusiasts would program sound chips in arcade games, personal computers or video game consoles to make video game music.

The musical style known as chiptune first appeared in the late 1980s. It makes use of vintage electronic sounds that can be produced using a variety of synthesizers or computer programs that are made to look and sound like the sound chip from an early video game system like Commodore 64. The retro synthesizer sounds of vintage gaming consoles like the Sega Genesis and Nintendo can be produced with chiptune plugins to emulate circuit bending. Chiptune musicians and electronic music producers frequently use chiptune plugins. 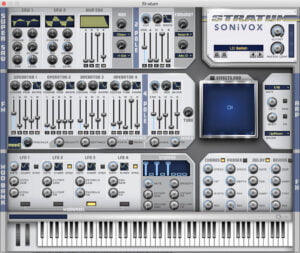 Put your sunglasses on and board the time machine because Stratum will transport you right into the futuristic soundscapes of the 1980s. We have combined synth technology from several eras together to give you THE SOUND of future-past by fusing the fat, broad supersaw oscillators with the traditional, rich sounding FM engine.

You may make tracks in a variety of retro-inspired genres using Stratum, including synthwave, retrowave, outrun, cinematic electronica, 8-bit chiptunes, and more. If you want to ride the wave of popularity that these timbres are experiencing, check out Stratum. The device will also be very useful in techno, trance, lo-fi hip-hop, and EDM, adding a throwback drum sounds flavor to your tracks.

A traditional Supersaw synthesizer and a 4 operator FM synthesizer are rock-solidly layered in Sonivox’s virtual instrument Stratum. The Supersaw waveform, which was first made popular by the Roland JP-8000, has made a significant reappearance in the trance and hardcore genres thanks to its abrasive sound, especially in synth leads and synth basses. In order to create a virtual instrument that is ideal for contemporary synthwave, vaporwave, and retro electro productions like those heard in the recent hit series “Stranger Things” and the film “Synchronicity OST,” Stratum chiptune vst plugins goes one step further and combines this classic waveform with a 4-operator FM synth, a noise generator, and a sub oscillator.

A simple modulation matrix with 4 LFOs with modwheel control, an 8-step sequencer called the Stepper, and two low-pass filters, a voice formant filter, and a tube distortion circuit are all included in Stratum to further enhance your sound effects. Stratum features a special XY Pad that can combine a Bit Crusher, Dirty Phaser, Wah Wah, and a Non-Linear Delay for those that need to punish their sound engines even more.

The presence of not one, but TWO arpeggiators—one for the Supersaw synth and the other for the FM synth—will please fans of arpeggiators. Additionally, Stratum offers built-in Chorus, Phaser, Delay, and Reverb effects to give your sounds and recordings the finishing touch. This is the Best Chiptune Plugin in 2022. MiniBit is an 8-bit chiptune synthesizer that simulates vintage computers and video game consoles from the 1980s, according to AudioThing. Everything about it screams retro, including the oscillator waveforms, the effects, and the user interface layout.

MiniBit has a single primary oscillator that supports 18 waveforms. A square wave pitched an octave controls lower serves as the sub-oscillator. The waveforms are not band-limited, and an oscilloscope can be used to see the oscillator’s shape. Drawing your own unique waveforms is a terrific feature. The oscillator also includes a glide control for legato effects.

An eight-step sequencer in miniBit provides additional sound design options and adds intrigue. The oscillator’s pitch as well as the loudness, filter cutoff, resonance, waveform, and downsampling can all be modulated by the step sequencer. The sequencer’s ability to modulate each of these settings offers miniBit more personality. Modulating the waveform, which is reminiscent of early trackers and wavetable synthesizers, will produce an 80s-inspired sound. The sequencer’s user interface is simple to learn, and each parameter has a random button that will enable you to generate creative sounds from nothing.

The effects in miniBit are designed to go well with the oscillator’s aesthetic and the sound of the time. The filter has cutoff and resonance settings, and it is a lowpass filter. The resonance has a warm sound, and it has a pleasant bite. The delay is mono and can be either free-running in ms or synchronized to the host BPM. In chiptune music, the bit crusher is useful. It has a downsample control and a bits control. To produce even gnarlier 8-bit sounds, it can add the appropriate noise and lower the oscillator’s bit depth.

For modifying different parameters, miniBit contains an LFO and an envelope generator. The oscillator’s volume can be modulated by the envelope, whereas different parameters can be altered by the LFO. The LFO can also be free-running or synchronized to the host pace. The global randomize button, which is next to the presets menu, is the last thing I liked. When you tap it, all of the miniBit’s properties are randomly generated to create a fresh patch, which is the ideal approach to spark creativity when you’re feeling uninspired.

A user-friendly and creative chiptune plugin is miniBit. The oscillator is strong, and it’s inspiring to be able to create unique waves. The sequencer makes miniBit a must-have plugin, and the effects are the ideal compliment to the plugin’s look and sound. Getting it shouldn’t be difficult because it’s reasonably priced. This is the Best Chiptune VST Plugins in 2022.

AudioThing created the 8-bit chiptune and lo-fi reverb plugin known as miniVerb. It has a similar design to the synthesizer we discussed earlier, the miniBit. The sound of gaming consoles and vintage computers serves as inspiration for miniVerb. By playing a delayed version of the dry signal, which essentially produces a slapback effect, it replicates the reverb sound of early video game consoles, which created a sense of distance. Of course, regular reverb effects were later developed from this, and miniVerb nicely replicates them.

To help you color the sound and get the ideal reverb tone, miniVerb comes with two filter units. The initial filter in the processing chain of miniVerb is referred to as a pre-filter. Before the sound is processed in any way, you can roll off high frequencies. After the echo or reverb sound has been added to the mix, the second filter, a post filter, rolls off high frequencies. The filters can be activated or deactivated and altered from lowpass to highpass.

The sound is further pushed into lo-fi territory by the vibrato engine’s added character like triangle waves or ring modulation. Although it can be amplified if you want it to, it adds pitch modulation to the wet signal to simulate the pitch flutter of vintage tape machines. To adjust the effect, there are rate and depth dials as well as an on/off toggle switch.

The element of miniVerb that fits chiptunes the best is the crusher. Bits, downsample, and shifter are its three knobs. The shifter adds a pitch-shifting effect, while the bits knob, which has a bit rate adjustment range of 2 to 24, adds a bit crush effect. The bits slider comes in helpful when making chiptunes, but the lower the value you select, the gnarlier and noisier it becomes. Since it allows for the most unconventional and imaginative consequences, the shifter is perhaps my favorite control. You can adjust or create strange harmonies for psychedelic effects.

AudioThing’s miniVerb is a gorgeous retro reverb and delay box. The sound is perfect for chiptune and lo-fi music, and it is true to the vintage video game sound era. The vibrato and crusher modules are a breath of fresh air, adding to the echo’s versatility and ability to produce a broad variety of sounds. All chiptune artists, as well as those interested in video game console music, lo-fi, psychedelic music, and any genre that attempts to emulate a throwback vibe, should definitely check this out.