Synthwave takes everything we liked from our childhoods and modernizes it for those of us who grew up in the 1980s. Innovators like Vangelis, John Carpenter, and Tangerine Dream were among the first to use synths in music. The 80s synth craze was sparked by the employment of synth leads, pads, sound effects, etc. in science fiction, action, and horror film scores and albums. As the genre has grown in popularity over the previous decade due to shows like Stranger Things, many people understandably want to try their hand at synthwave production but are unsure where to begin. That’s why we’ve compiled a list of the best synthwave VST plugins, both free and premium, to help you on your neon-lit synthwave trip. 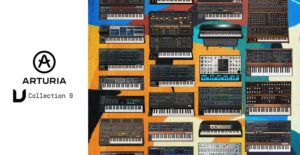 V Collection 8 is a collection of 28 software instruments that recreates some of the most iconic hardware synths of all time, including analog synths, digital synths, organs, acoustic pianos, electric pianos, and string machines. Arturia has set out to more accurately recreate all of the iconic and classic synthesizers of the past. While the analog synthesizer may be purchased separately, the set represents incredible value for money given how realistic each individual plugin sounds.

This plugin collection will be heaven for you if you already know when you’d go for a Minimoog or an Arp 2600. Programming your sounds with the same interface and layout as the classics is as near as you can get to owning the real thing frequency modulation. This is the best Synthwave Plugin in 2022. U he Diva is the world’s first native software synthesizer, employing a ground-breaking methodology that employs real-time approaches from industrial circuit simulators like fm synth. Diva is the only virtual analog synth that many of us require. U-HE went to tremendous measures to painstakingly duplicate every aspect of all of our old favorite synths into a ‘one plugin to rule them all’ package. This should be the VST you use to make all of your synthwave tracks if you only have one for the price tag.

The purpose of U He Diva was not to recreate a single synth, but rather to construct modules that allow us to choose our own oscillators, filters, and envelopes and assemble them ourselves for synthwave sounds. To play with, there are five oscillator modules, five filter modules, two stereo effects slots, and two LFOs.

When you combine a Minimoog oscillator with a Roland Jupiter 6 multimode filter, it’s very evident which classic synth each of these modules is attempting to replicate, which will make your inner synth nerd grin. However, transferring that iconic analog synth sound to a digital format isn’t easy. If you want to use many instances of Diva, be prepared for tracks to freeze.

This plugin is a complete powerhouse for synthwave music production. From delicious and growing pads to grinding, violent lead sounds, it can handle everything. It does it with unquestionable authority. This is the best Synthwave VST in 2022.

The Roland JUNO-60 synthesizer is emulated by the U-NO-LX. It includes all of the parameters of the original device, as well as some additional features that improve workflow. When comparing the two instruments, there’s absolutely no discernible difference, and the TAL version is certainly the superior value if you’re on a budget.

The U-No-LX is separated into four distinct components. The presets menu is located at the top of the page. The main portion, which includes all of the oscillators, filters, ADSR, and the iconic chorus, is seen below. Following that are controls for LFOs, portamento, and an arp. The keyboard, which is positioned at the bottom, is the final component.

Because the TAL-U-No-LX doesn’t have any built-in effects, which might potentially muddy the sound (save for the chorus), the majority of the patches sound very clean. If you’re into Synthwave, Vaporwave, or modern pop music, the plugin comes with everything you need to make the iconic hardware synth sounds we all know and love. Aside from the pleasant sound, it’s a terrific instrument for learning analog synthesis, and even if you don’t want to produce your own sounds, it comes with a large preset library. Because TAL provides a free demo version of the synth on their website, you may try it out for yourself and create your own judgement.

The Usynth series is a new set of instruments that make creating sounds and performing live simple and intuitive. Usynth 2080, Caramel, and Euphoria are the three flavors available. The Caramel makes it simple to produce ambient soundscapes, but the Euphoria focuses on synth sounds for electronic dance music, such as plucks, powerful leads, organs, arpeggios, and FX.

The Usynth 2080 has a hundred different synth modes. The plugin creates its “modes” or presets by combining multiple modules. When you load a Synthesizer preset, you’re actually loading a small synth that you may tweak using the user interface’s numerous knobs.

First, the Dark/Bright knob, which regulates many parameters in the sound engine to vary the overall character, can be used to control the brightness of the synth. Second, the Fast/Slow knob changes the speed of the sound by controlling various envelope generators. The parameters that it modifies, however, are determined by the preset type. Slowing down a synth pad, for example, might result in a slower attack and a longer release, whereas a pluck would just modify its release because a sluggish attack wouldn’t make sense.

Similarly, below the Synthesizer section, you’ll discover three “software knobs” that control the preset’s most important settings. Character, chord, and distortion; character, dirt, and pushed; and so on, depending on what the sound designer deemed important for sample packs and drum samples. While they don’t provide you complete control, they do allow you to drastically speed up your workflow.

On the surface, Usynth 2080 appears to be a beginner’s plugin, yet the sound quality and efficacy indicate otherwise. I like to think of ujam’s simple designs as time savers. In most circumstances, you’d spend hours working on a sound just to wind up with something that the developers have already created. From synth pads and keys to leads, plucks, and sound effects, there’s something for everyone. The sequencer presets, as well as the Finisher modes, allow you quickly develop and polish a composition. So, if you’re interested in making Synthwave or Chillwave music, give this plugin a shot and see if it saves you time and effort. 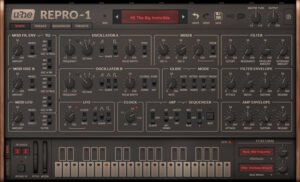 Repro 1 is u-monophonic he’s version of the revered Prophet 5 synth, incorporating component-level modeling. u-he turned their attention to Sequential Circuits’ blockbuster synthesizers from the 1980s, the Prophet 5 and Prophet Pro One, after producing Diva, a famous analog modeling synth. The Repro bundle was born, and it included two synths: Repro 5 and Repro 1. Repro 5 is a polyphonic synth with eight voices, whereas Repro 1 is proudly monophonic.

The main user interface of Repro 1 is similar to that of the Pro One synth, particularly in terms of how the parameters are organized. u-he, on the other hand, has clearly made a number of current adjustments. The synth’s principles are fairly basic, as one would expect from a synth designed nearly four decades ago. However, intriguing features such as Tweaks and Sequencer, as well as a preset library, help keep the synth relevant as ever.

If you like the Pro One synthesizer, u-Repro he’s 1 is undoubtedly the greatest emulation available now and in the future. It delves deeply into the synth’s components to unearth every flavor and peculiarity of the original hardware while also incorporating modern features such as a comprehensive sequencer page, in-depth sound control, and high-quality effect processors. Sure, it lacks the flexibility of current software synthesizers. Repro 1’s beautifully rich tones, on the other hand, might just come out on top for you when it comes to generating mono leads, bass, and arpeggio patterns.

UJAM Vice is a drum machine that specializes in producing beats for retro music genres such as Synthwave and Chillwave. Vice is part of the brand’s Beatmaker package, which is a collection of beat-making plugins with a focus on ease of use. The package is also included in my list of the top plugin bundles. The bundle includes various plugins, such as Vice, that are each dedicated to a different genre.

Vice includes eight vintage-sounding drum kits. It also has built-in loops, fills, and grooves to help you quickly compose drum patterns. Additionally, several parameters allow you to perform simple mix adjustments and add effects to dramatically alter the sound. While the simple user interface may appear to be a beginner’s tool at first glance, advanced users will enjoy how quickly it produces results.

This plugin includes ten drum kits. These samples are based on well-known analog drum machines from the 1980s. Similarly, there are 690 groove patterns spread throughout 30 musical genres. The basic New Wave-style beats that define the Synthwave and Chillwave genres, as well as modern variations, are among them. Intro, verse, fills, chorus, breakdowns, and closing pattern variations are all included in each style. As a result, you might use the built-in patterns to complete the drum part of a song.

Vice is proof that UJAM’s Beatmaker series is a lifesaver if you’re having problems producing drum patterns. Similarly, its high-quality sound is an excellent addition to the arsenal of a seasoned user. Vice will also assist you in ensuring that the drums aren’t the cause you fear deadlines when creating Synthwave and Chillwave music for a film or game. The RC-20 Retro Color from XLN Audio is one plugin that has gotten a lot of attention in recent years. It has several effect parts, including noise, wobble, distortion, bitcrushing, reverb, and a feature called magnetic, which is essentially volume randomization. There are also output filters, an overall mix fader, and a fantastic presets menu included. This plugin is all you’ll need to turn any sound into something that sounds charmingly vintage and reminiscent of old recordings.