Harold Rhodes created the Rhodes piano, and in 1959 he partnered with Leo Fender in a business endeavor. Consequently, the Rhodes became known as the Fender Rhodes piano.

The Rhodes was used extensively by Ray Manzarek of the Doors, whose song “Riders On The Storm” features it. It immediately became a favorite among jazz musicians like Miles Davis and Herbie Hancock. Due to the Rhodes’ distinctive sound, many musicians used it in the 1970s. Roland, who created digital reproductions of the sound, bought the firm in 1987. Despite being relaunched in the 2000s, the instrument is still pricey and hard to find. However, owing to technology, you can now download a plugin that perfectly imitates the rich, warm sound of a Rhodes. 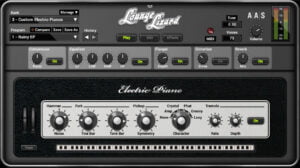 Check out the Lounge Lizard EP-4 if you’re seeking for a high-quality plugin that accurately reproduces both Wurlitzer and Fender Rhodes tones. With fewer than 20 options, this Applied Acoustics Systems plugin is quite straightforward. Since you don’t need to be an expert at mixing, it’s simple to use and won’t be intimidating.

Although Applied Acoustics Systems Lounge Lizard EP-4 initially appears to be just another Stage 73 software emulator, a closer look reveals that it is much more than that. It is not a sample instrument; rather, it is what is referred to as a physically-modeled plugin, which has many benefits for us. You have a very sensitive and dynamically rich instrument that is suited for both live performances and studio sessions because there are no samples involved.

The Lounge Lizard EP-4 is a top-notch plugin developed by Applied Acoustic Systems that perfectly captures both the iconic Wurlitzer sound and the vintage Fender Rhodes sound. The simplicity of the Lounge Lizard’s design was a priority. The plugin is ideal for anyone with little to no mixing expertise because it is by no means overpowering.

Despite being straightforward, it goes much beyond the standard Rhodes sounds one might anticipate. You may create distinctive Rhodes tones, such as bell, chime, and organ-like tones. The Experimental presets area has these and additional options for exploration. In addition, you may adjust some insane, unexpected tones by fiddling with the compressor, equalization, and multi-effect processor.

How much you can accomplish with physical modeling technologies in a meager 70MB bundle is simply astounding. However, the playability and responsiveness of the Applied Acoustics Systems Lounge Lizard EP-4 are what really stand out. Additionally, having onboard FX and more than 240 quickly accessible presets is helpful. This is the Best Rhodes Plugin in 2022.

When it comes to VSTs for antique keyboards and synthesizers, Arturia stands out from the competition. They have almost any product you could imagine in this market, but we’re going to focus on their Rhodes Stage-73 VST. This is an accurate and remarkably adaptable imitation of the instrument with lovely, transparent tones. By moving the tone knob, you can also go from the 1973 to the 1974 version.

The Arturia Stage-73 V perfectly captures the distinctive sound of the Fender Rhodes keyboard and goes one step further by incorporating three different Rhodes model keyboards, physical modeling elements, and a vintage amplifier into a single plugin. The Arturia Rhodes VST is definitely the finest option if you’re an old-school traditionalist.

The Stage-73’s layout is not only aesthetically beautiful, but also practical. You can experiment with a large selection of pedals to upgrade your Rhodes sounds. There are plenty of possibilities for effects, such as altering the curves and wet/dry mix. The little Fender Twin amplifier can be used if you desire a gritty final tone. The incredible collection of presets, which includes Clean presets, Short presets, Dark presets, Distorted presets, and many more, is simply arranged by category. If you value customisation, Arturia’s Stage-73 should be at the top of your shopping list.

Finally, this plugin also includes a fantastic VST replica of the iconic Fender Twin amplifier. You can modify the unique, vintage Rhodes sound produced by this pairing of the Fender Twin and Rhodes as much (or as little) as necessary.

Overall, the Arturia Stage-73 V is an incredible Rhodes VST that flawlessly reproduces the Rhodes sound and includes many other helpful features like a large selection of instruments, presets, and physical modeling options so you can create the ideal sound for your upcoming recording or live performance. This is the Best Rhodes VST Plugin in 2022. You can get any Rhodes sound you want on the Mark One, from traditional to funk. You can also use the line output of the Rhodes rather than the amp if you prefer a tone that is incredibly transparent.

You may change the mixing and recording using this software from XLN Audio. Additionally, you can select a vintage microphone and change the distance between them to change the ambience. Look at the amp settings to experiment with the distortion or warmth. In addition to a floor mic and a room mic, the Mark One comes with a dynamic mic, a room condenser, and a ribbon mic. A Roland Dimension D for analog stereo chorus is an additional option.

Addictive Keys Mark 1 is an excellent investment for any musician because it accurately reproduces the distinctive sound of a Fender Rhodes at a fraction of the cost and has a sensible workflow, lovely presets, quick load times, and wonderful performance. The iconic electric pianos from the 1960s and 1970s are combined into one adaptable instrument called Velvet, a virtual electronic piano. In order to bring your piano songs to life, Velvet faithfully replicates the sound quality, response, and nuances of each original instrument based on the Fender Rhodes Suitcase, Fender Rhodes MK I and MK II Stage Pianos, Wurlitzer 200A, and Hohner Pianet-T. Additionally, Velvet has a variety of onboard effects and gives you complete control over the sound for unmatched realism. For example, you can warm up your tone by turning up the tube drive controls in the preamp section, customize the playing experience by adjusting the timbre, dynamic response, and velocity curve, and create an authentic electric piano track by blending in the sound of the pedal and other keyboard mechanical noises.

The electric piano track you create with Velvet can have crunch, ambiance, or tremolo added with the built-in preamp and a variety of effects. To shape your sound, its potent preamp section has a proprietary 3-band EQ with a parametric mid band, tube overdrive, compression, and other features. To recreate a classic sound or create something new, further process your sound with a variety of distortion, wah/filter, chorus, flanger, phaser, and tape delay effects. The Atmosphere, Spring, and Room reverbs allow you to add a large ambience to produce otherworldly effects or a little room reverb to give your performance a little extra color. Tremolo and autopan effects are also available; the former is based on those found on vintage electric pianos.

The sound designers at AIR Music Technology painstakingly created 350+ professional presets for Velvet that make it simple to access real electric piano sounds. By adjusting Velvet’s potent controls, you can even make your own special presets. With the turn of a knob or notch of a slider, the controls’ graphic user interface, which is reminiscent of classic electric pianos, makes it simple to change sounds.