While streaming services like Netflix and Hulu are popular, you’ll need a Blu-ray player to get the finest audio/visual experience from your home theater as movie lovers. A desirable DVD or Blu-ray product may be imported from another country for dedicated cinephiles. Regency codes, though, may make it difficult to watch on a standard DVD or Blu-ray player. A multi-region player, on the other hand, allows you to watch physical media from all over the world with the best video quality playback support.

Sony is a high-end brand that produces not just entertainment-related devices such as televisions and Blu-ray players, but also professional accessories such as cameras, sony entertainment network and projectors. As a result, going with Sony when purchasing such electronic gadgets is a wise decision for the great viewing experience.

On the first spot, we have a fantastic high-end Blu-ray player from Sony. The Sony UBP-X800M2 Home Theater supports 4K UHD Blu ray discs for unrivaled picture and sound quality. It’s one of our better options because it includes wireless WiFi access, allowing you to connect your device to your network for video content streaming support. This allows you to immediately stream high-quality content from your favorite online content streaming websites.

When it comes to the device’s high resolution audio quality and picture quality, it has one of the best Dolby Vision display support, as well as HDR 10 compatibility, so you can enjoy the best clarity in your movies. Sony’s DSEE HX software, which will upgrade your audio performance even if the source audio isn’t fantastic, has been added to improve sound quality. It can play practically every video format supported by Blu-ray discs, as well as upscale lower-resolution content to 4K resolution. This is one of the Best Region Free Blu-Ray Players in 2023.

The LG UBKM9 all-region Blu-ray player is a terrific pick because to its 4K UHD support. With Blu-ray region A, blu ray region B, and C support, as well as DVD region 0 through 8, it can handle whatever disc you throw at it. The transition from PAL and NTSC is seamless using the remote control. The LG UBKM9 also tackles 4K Ultra HD as a 4K UHD Blu-ray player. HDR, HDR10, and Dolby Vision are all examples of high dynamic range (HDR) implementation. The UBKM9 supports Dolby Atmos, Dolby Digital, Dolby TrueHD, DTS, and DTS-HD Master Audio in terms of audio.

LG also includes Wi-Fi and Ethernet for smart streaming capabilities in its multi-region DVD and Blu-ray player. On the UBKM9, you may watch Netflix in 4K. PAL, Secam, and NTSC are all supported due to their compatibility with 110, 220, and 230 volts. The LG UBKM9 is the best region-free Blu-ray player on the market, featuring 4K UHD video output, HDR10 and Dolby Vision support, and the ability to read any region-coded Blu-ray or DVD. It isn’t cheap, costing roughly $350 USD. Nonetheless, this is comparable to most region-locked Blu-ray players. The LG BP-350 comes in at around half the price if you don’t need 4K. Netflix and YouTube are the only streaming providers available, which is a bit disappointing. Granted, that’s more than many other Blu-ray players, and even if your physical media player can stream, a dedicated streaming set-top box like a Roku, Apple TV, or Android TV device is preferable. The LG UBKM9 is the best 4K 3D region-free Blu-ray player for most consumers, thanks to its high specs and low pricing.

Whether we’re talking about TVs or desktop monitors, LG makes some of the best displays on the market right now. If you want to exhibit a similar high-end Blu-ray player at home, you may acquire one from LG. For the second position, we’ve decided to provide yet another UHD 4K Blu-ray player to individuals looking for a high-end option. The LG 4K Smart Blu-ray player is also a region-free Blu-ray player, capable of playing Blu-ray discs from regions A, B, and C, as well as DVDs from 0 to 8. As a result, you may use this all-in-one gadget to watch Blu-ray discs, DVDs, CDs, and 3D movies. For the best movie experience results, it also upscales lower resolution content to 4K quality.

This Blu-ray player’s video display capability includes HDR, HDR10, and Dolby Vision. To create realistic sound effects, it supports Dolby Digital, Dolby TrueHD, and DTS audio processing. If you don’t already have a Blu-ray disc set, you can use this Blu-ray player to stream 4K video from online streaming sites through WiFi.

The Panasonic DP-UB900P-K Blu-ray and DVD player is a fantastic multi-region device. It can play DVDs, Blu-rays, and 4K Ultra-HD Blu-rays, among other formats. The Panasonic UB9000P-K has an excellent build quality. From design to performance, it’s a high-end 4K region-free Blu-ray player. The DP-UB9000 is made of aluminum, unlike many Blu-ray players, which are generally made of cheap plastic. The disc drive is positioned in the center with a steel plate for further vibration reduction, and the dual-layer chassis decreases noise and vibration.

Panasonic has an HDR (high dynamic range) optimizer in its Hollywood Cinema Experience (HCX) picture processing engine. The tone mapping capabilities of the HCX engine have been improved. Dolby Vision, HDR10, and HDR10+ are all supported. A pair of HDMI outputs are included, allowing you to connect to a traditional soundbar or receiver. In addition, the Panasonic DP-UB9000 has an analog 7.1 multi-channel output that may be used to connect to older audio components. Additionally, you’ll find balanced XLR or unbalanced RCA connections for stereo audio out.

While the DP-UB9000 is primarily a Blu-ray player, it also support restricted streaming services such as Netflix and Amazon Prime Video. Unfortunately, you won’t find SACD player or DVD-Audio support. And its price is pretty high. Nonetheless, the DP-UB9000 is the greatest region-free 4K player now available.

The iVid BD780 is a multi-region Blu-ray player that is reasonably priced. The iVid BD780 is an excellent all-region disc player with its NTSC to PAL 110-240 volts compatibility. There’s an Ethernet port and a USB port on the board. The BD780 can read both normal 2D and 3D Blu-rays, in addition to DVD regions 0 through 8 and Blu-ray regions A, B, and C. Uncompressed audio formats such as Dolby TrueHD and DTS-HD Master Audio are supported. In addition, the iVid BD780 features analog audio and video outputs such as composite and component. The iVid could be a good fit if you have an older television, monitor, or projector that doesn’t have an HDMI input.

Unfortunately, the iVid BD780 does not support 4K UHD. It also lacks some connectivity options present on higher-end and even mid-range Blu-ray players, such as twin HDMI outputs for better compatibility with legacy audio systems. It’s also not compatible with streaming services like Netflix or Hulu. Nonetheless, the iVid BD780 is a superb multi-region Blu-ray player because to its low price and wide range of connectivity choices, as well as its ability to read DVDs and Blu-rays from all over the world. 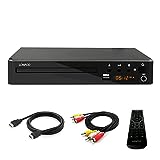 The LONPOO LP-099 all-region DVD player is a cost-effective way to enjoy your region 0-8 DVDs. It’s a terrific bargain for audio technology. Even if you don’t need the multi-zone DVD playback capability, the LP-099 is a good value for money DVD player. An HDMI output with 1080p upconversion, component and composite video outputs, and a USB connector for digital media playing are all crammed into its ultra-compact form factor. You may convert PAL to NTSC and use progressive scan. There’s even a microphone jack. The LONPOO LP-099 multi-region DVD player has a lot of connectivity, so there’s not much to hate about it. Unfortunately, the USB connector does not support MP4 and there are no streaming options. You can’t really complain for the price. The LONPOO LP-099 is one of the most affordable DVD players that plays all regions if you have a collection of region-locked discs.

What is a Region Free Blu-Ray Player?

Physical material can be handled by a multi-region Blu-ray or DVD player regardless of its region code. Instead of purchasing only discs from your region or all-region discs, you’ll be able to purchase DVDs and Blu-rays from all around the world. Cinephiles who want to collect foreign versions of films and TV shows, or who are looking for a specific prized release, may find this very beneficial.