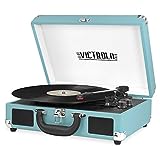 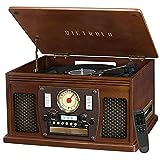 If you’re looking for a record player (or a turntable), you’ll quickly discover there’s a lot of variety in the market. To begin with, not every turntable is a record player. A record player comes with built-in speakers, allowing you to listen to your vinyl without any further equipment, but a turntable requires an external speaker. Some have Bluetooth capabilities, while others require the use of an aux wire. Whatever your preferences, we’ve compiled a list of options to assist you in selecting the ideal record player or turntable for you and your vinyl collection.

The Victrola Nostalgic Navigator 8-in-1 is the Best Victrola Turntables in 2023. But it does much more. It’s packed with features for your record collection. You can listen to music in any format you can think of: CD, tape, vinyl, USB, from a smartphone or other device via bluetooth or wired connection, or the radio.

In detail, the turntable’s auxiliary and headphone jacks allow you to connect it to your smartphone. When the connection is successful, the turntable will function as an additional speaker for your device. Of course, you can also use your smartphone as a remote control to choose and play the music you like!

Even when the player is playing a vinyl record, you can still control it from a distance. The remote control that comes with the product will help you get the job done! In case the audio volume is not high enough, even though you have turned the knob all the way, feel free to expand the machine with other separate speakers! The RCA line outputs allow you to connect it to most current amplifiers on the market today!

Although made from particle board, Victrola has worked diligently to make this product appear, in the blink of an eye, of exceptional quality. However, the flaw is that in many cases the cheap construction of the product causes it to fail a few months after use. It offers a variety of different features including multiple ways to play audio: via cassette, CD, Bluetooth, vinyl, radio, and auxiliary cable.

It also has built-in speakers that are much better than you might expect from a device in this price range, although they obviously can’t compete with a good pair of powered external speakers. And on top of all that, it looks great. The vintage design dates back over 100 years and looks great in any home, thanks to multiple color options. 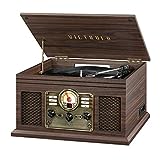 If streaming music is your hobby, you will love this Victrola 6-in-1 turntable! As the machine is built with modern technology, you will be able to play and stream your favorite songs in 6 ways.

To stream music, you can connect this player to your smartphone, tablet, or laptop via bluetooth or cable. Each route has its own specialty. While the Bluetooth connection gives you more portability and flexibility to play your songs, the wired connection (auxiliary input) guarantees the transferred signals to enjoy quality music. The machine has a radio mode, a cassette port, a CD port! As you can see, the Victrola 6-in-1 supports almost all types of music inputs. Honestly, this product should be added to your home entertainment system.

When it comes to portable all-in-one turntables, this one reminds us of the classic turntables of yesteryear. For an all-in-one, it looks relatively attractive and isn’t too bulky or clunky, despite the variety of media it can read. However, as with many Victrola products, it is quite inexpensive, with internal mechanisms made of plastic and wood particles.

A locator lever is not included with this turntable. Also, it comes with a standard Victrola cartridge and needle, which may cause reading problems for some users. Plus, it’s a belt-driven, manual-style turntable. Some people find the extra features like the CD player and cassette player to be a bit tricky, but in the end, it gets the job done.

The Victrola Vintage Suitcase turntable is a good budget option if you want to enjoy your precious records on the go. The design of the case not only makes it easy to transport, but also protects the turntable components during transport. It’s built with a sturdy top handle and weighs just 2.69 pounds.

If you know the history of turntables, you already know that it all started in 1906, when Victrola really made a name for itself in the audio world, thanks to its high-quality audio equipment that was truly one of the best at the time. The legend continues as Victrola continues to introduce the best entry-level turntables on the market. This particular model is a reproduction of the once popular suitcase turntables that were a hit sixty or seventy years ago.

This versatile option offers three read speeds (33 1/3, 45 and 78 rpm). You can also stream audio from your devices through the built-in Bluetooth speakers. An RCA output offers the ability to connect this turntable to more powerful speakers. With over 30 different color options, finding the right one for you won’t be difficult.

The design is relatively simple and is great if you are looking for something compact and space saving. However, this turntable is lacking in the functionality department. Although it’s three-speed and belt-driven, with speakers and a built-in preamp, this is where it stops. It works as a bluetooth playback device, whose speakers can be connected to your phone for more audio options.

The Victrola Vintage 3-Speed ​​Bluetooth Suitcase Turntable with Speakers may not be the best turntable with speakers, but it’s ideal for budget-minded audiophiles looking for the best listening experience available at an affordable price. The portable design combined with Bluetooth connectivity will allow you to get the most out of your new turntable, at a price that won’t break the bank. 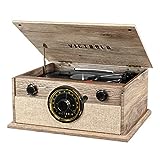 This is a huge, clumsy turntable that is yet portable. This Bluetooth turntable has a design that resembles real wood. However, because it is made of particleboard, some users have reported that their record players arrived deformed. Finally, it resembles a true old record player and harkens back to more traditional designs.

The tonearm lacks a cueing lever, you’ll have to manually set the needle on the record. It’s a belt-drive, automatic record player with built-in speakers and a pre-amp, yet many people complain about the sound quality. This could be due in part to the Victrola cartridge that came with the record player.

This is a plug-and-play gadget, thanks to the built-in speakers and preamp. Simply remove it from the packaging, plug it in, and play your favorite record. There are only a few upgrades available. You can replace the needle, but it will only work if you use a regular Victrola cartridge. External listening devices can be connected for marginally better audio quality.

In the end, this specific turntable’s performance is poor. Many people discovered that their albums regularly skipped when they were played. Furthermore, the Victrola record player’s built-in speakers do not provide high-quality sound. The audio quality is poor, especially when compared to other portable record player options. 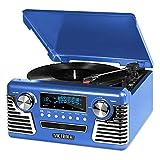 With its retro style, this turntable transports us to the 1950s. It reminds us of a vintage jukebox or stereo, and it definitely adds to the novelty factor. However, it is unquestionably not of the highest grade. Many individuals found that the Victrola record player, which was made of plastic, was weak and frequently arrived damaged.

It does, however, have a few distinguishing qualities. It undoubtedly has its merits, with built-in speakers and preamps, an FM radio and CD player, and the option to record vinyl as an MP3. It’s belt-driven, with three speeds to choose from, allowing you to play a wide range of records.

Because of the architecture of this record player, you have less options for upgrading and customizing your listening experience. Nonetheless, you may connect additional speakers and replace your cartridge and needle for enhanced audio playing quality. Furthermore, the unit itself is available in a variety of colors, allowing you to select a design that best suits your preferences.

This record player, like so many of Victrola’s other goods, isn’t the greatest on the market. It’s also a little fragile, and the sound quality isn’t great. It does, however, provide features that many other low-cost portable turntable brands lack, such as the ability to convert vinyl to MP3s. It can be an excellent listening device for folks who like to casually play records and other types of audio if you’re ready to put in the money to upgrade it.