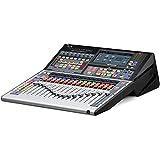 The purpose of the digital mixer, an electronic device used in sound processing, is to employ digital circuitry to combine sounds from various audio sources. The digital mixer, also known as a mixing desk, mixing console, or mixing board, is frequently used to design sound quality for live broadcasts like public address (PA) systems as well as recordings. Utilizing one or more of its several input channels, it is also utilized to modify the sound dynamics and many other aspects of the audio signals. Additionally, you may simply adjust or add effects to audio streams using the digital mixer; after that, you can combine these signals to create a mono or stereo output for amplification on a PA system. A “house mix” is the name of this procedure.

The need for large mixer consoles to be used for audio mixing is long gone. Digital mixing software is now available that enables you to combine audio sources, process them, and route them to PA systems or other destinations. Mixing technology has advanced quickly in recent years. Digital audio workstations (DAWs) are still preferred by performing artists and home studio owners because they have physical knobs, buttons, and faders. Sound system mixers and PA mixers are other names for live sound mixers.

The acoustic characteristics of the space should be considered when creating a “house mix” for a specific indoor venue, such as an auditorium, in order to combine the different modifications required for volume, equalization, treble, bass, and other effects. House mix, particularly when used during concerts or musical productions, can considerably enhance the sound quality produced inside an auditorium. When capturing the audio of such an event, you should never use a house mix, as doing so could greatly reduce the sound quality.

A number of the descriptors that describe the input-output functions are typically present in digital mixers. The quantity of inputs, output buses, and master output channels are each denoted by a three-number descriptor, such as the 24:8:2 descriptor.

PreSonus’ most potent console to date, the StudioLive 32SC is a powerhouse for a small console. This 32-channel rackmountable digital mixer has a dual-core FLEX DSP engine with more power than 286 processors running simultaneously. The FLEX FX multi-effects processor also boasts four slots for delays and reverbs with four separate effects buses. Enjoy simple expansion owing to integrated AVB networking. Enjoy flexible operation thanks to the 16 Flex Mixes on the 32SC. PreSonus’ acclaimed Fat Channel processing will shape and polish each channel to perfection. With the PreSonus StudioLive 32SC’s extensive software package, you can start recording at the highest caliber right away.

If you want a digital mixer with lots of channels, the Presonus StudioLive 32SC is a great option. It has a 32-channel digital mixer with a lot of punch that is both small and powerful. The portability of this small mixer is a benefit. You can easily pack it up and transport it to your live performance location.

There are 40 mix channels, 286 concurrent processors, and 26 mix buses available with this digital mixer. These tools provide you complete control over your output, enabling you to produce work of the highest studio quality. The Presonus StudioLIve 32SC’s audio is built around analog circuitry. Its analog XMAX mic preamps provide great digital recall and convenience without compromising fidelity. The UC Surface software or its Studio One program both allow for remote control of it. In addition to being portable, the Presonus StudioLive 32SC has a built-in virtual check. For convenient and incredibly easy outputs wherever and anytime, you can record all 32 channels to your SD card or USB. This is the Best Digital Mixer in 2022.

You can use your iPad in addition to the QU-16C to control this mixer’s primary features. As a result, you may manage many tasks using your iPad, including monitoring mixes and controlling important settings. There are 16 buses, 16 TRS/XLR inputs, 4 stereo effects returns, and 3 TRS stereo inputs total on this digital mixer. Additionally, you’ll be really appreciative of the connectivity it provides. The four built-in effects engines, movable faders, AES digital output options, and direct-to-multitrack recording functionality of the Qu-16 are additional features.

You have full control over all mixing parameters using your iPad. To design your own control panel that makes it simple for you to mix a show, you can also modify and change the GUI.

The Zoom LiveTrak L-20 is a triple threat because it can serve as a live console, an audio interface, and an internal SD card recorder. A band’s PA system can be built around the largest LiveTrak model (16 mic/line, 2 pairs of stereo line, and L-12 and L-8 variants are also available from Zoom). Each input channel contains a 3-band EQ and a single-knob compressor in terms of effects. Reverb and delay were added to the master bus by Zoom, and you may access them via two effects sends for each channel. The device has six aux outputs that can be used as wedge, headphone amp, and in-ear monitor system monitor sends.

Its built-in 22-track SD recorder (card supplied separately) allows you to capture performances at resolutions of up to 24-bit/96kHz. You may utilize the LiveTrak L-20 for band-sized sessions in your home studio because it also serves as a 224 USB interface. The L-20 contains a simple Class-Compliant switch that eliminates the need for an adapter when connecting an iPhone or iPad if you wish to record to an iOS-based DAW. But you’ll need to buy a BTA-1 or other appropriate wireless adapter if you want to utilize L-20 Control, Zoom’s iPad app for remote control. Additionally, Zoom produces the L-20R, a less priced, rackmountable model with fewer physical controls that is only intended for use with remote controllers.

Behringer’s seized the opportunity presented by the stagebox/mixer format’s rising popularity and moved quickly to produce an accessible mixer model for live sound. In addition to being reasonably priced, it boasts lots of wonderful features. Of course, since it is remote controlled, you will never see its typical mix controls on the mixer itself.

The Air X18 has 16 mic inputs, and you may use any 6.3mm or XLR jack connection to connect to them using combi-type connectors. Everything from guitars, mics, playback, and keyboards can be connected. Its 17 and 18 inputs are also limited to line-level inputs. As a result, they have less processing power than the other 16 channels.

The main screen layout of this mixer is simple to master if you are already accustomed to the digital mixer setup. If you don’t link the XR18 to a device running the X-Air control app, it won’t function. This program may be downloaded online and installed on any Android smartphone, iPad, Windows, or OS X computer. Although there isn’t already an X-Air Control App for the iPhone, this possibility is something to look forward to. You may therefore remotely manage this 18-input digital mixer for live sound applications after connecting to your iPad or Android tablet.

For excellent audiophile sound quality, the Air X18 has 16 entirely configurable mic preamps built by MIDAS. Additionally, it has a Tri-Mode integrated Wi-Fi router for totally direct operation without the use of external routers. Additionally, it has a bidirectional 18 x 18 channel USB interface that lets you use your iPad for direct recording.

The revolutionary Dugan-style auto-mixing capability that comes with the X Air X18 enables you to automatically manage and regulate the microphone gain sharing. Along with that, it has 100-band RTA or Real-Time Analyzer for all channels and bus EQ’s Ultranet for personal monitoring.

The LR buses with inserts and six aux, dynamics processing, and a 31-band graphic EQ or 6-band parametric EQ are some of the other standout features of the X Air X18. Additionally, it has 2 XLR mini outputs with phone connectors, 6 TRS aux outputs, and an RCA output. Therefore, the Air X18 gives you access to a portable, user-friendly, and reasonably priced digital mixer for live and studio mixing.

You might make a double take when you first see K-Mix. Instead of faders, it has backlit touch strips that can be used as channel faders or level controls for aux sends, input trims, and reverb sends, depending on the mode you select. The LEDs that are visible through the translucent faders can indicate their positions or serve as VU meters. You receive four “Rotaries,” which are rounded multifunction controllers with four knobs in place of knobs for panning (K-Mix even supports surround panning) and modifying the channel-based dynamics processors, 3-band EQ, and master reverb’s settings. K-Mix is extremely small and can be stowed in a laptop bag or backpack.

Additionally, it can be bus-powered via USB from a laptop or portable device. But don’t be fooled by its little stature. K-Mix is remarkably adaptable. With only two mic inputs and six line inputs, a USB audio interface, and a MIDI control surface with transport controls for your DAW, it may still be used as a standalone mixer. You have visual control over each function using the free K-Mix Editor software (Mac/PC). DJs can even connect in their turntables by switching the line inputs in the software to phono level. Additionally, the K-MIX will give your lair even more distinguishing flair if you’re a livestreamer with a battlestation that sticks out due to highly visible RGB-equipped equipment.