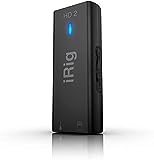 The Apple iPad has completely changed how music is created. A performer, DJ, or recording engineer may put together a pro-caliber setup with just a tablet, an audio interface, and a few add-ons. Any interface with a USB connection, including big rack-mount devices meant for studio use, can be converted to function with an iPad or iPhone. However, in this assessment, we’ll concentrate on a number of additional portable models that are better suited for creating music anyplace. These models have compact designs and low power consumption.

The iTrack Solo lives up to Focusrite’s stellar reputation for producing great preamplifiers and audio interfaces. This 2-in, 2-out interface, which was created especially for use with your iPad, is also compatible with Mac OS and Windows and comes with both Lightning and USB 2.0 ports.

A 1/4-inch high-impedance instrument input and an XLR microphone input with 48 volt phantom power are located on the front panel. Each has a level control and a signal halo to show when it is clipping or at a certain level. Gain from the mic preamp can reach 50 dB. Additionally, there is a Direct Monitor switch and a huge volume knob on the 1/4-inch headphone port. RCA connectors for the left and right line level outputs are available on the back. There are options for audio conversion rates up to 96 kHz, 24 bits.

The iTrack Solo comes with USB and Lightning cables in addition to licencing for a tempting software package that includes Ableton Live Lite, Focusrite’s Scarlett Plug-in Suite, the Novation Bass Station plug-in, and 2 GB of Loopmasters samples. These are all available for download from the Focusrite website. iTrack Solo is a 1.1-pound, 1.77 x 6.04 x 4.12-inch solid aluminium case. Focusrite provides a three-year warranty on all of their products. This is the Best iPad Audio Interface in 2023.

The iRig HD 2 is made with a few unique features that guitar players will love, but it also functions perfectly as a general-purpose audio interface. This is an improved model of their first-generation iRig HD. It is by far the smallest audio interface we have evaluated so far, measuring just 3.9 x 0.83 x 1.54 inches and weighing 1.8 ounces. No adapters are required because lightning and USB cables are included.

For a guitar, bass, or other instrument, it includes a single High impedance input with a single input level LED. 24-bit sampling is supported up to 96 kHz. A micro USB connector, a mini headphone jack, and a balanced mono TRS connection are available as outputs for connecting an iPad or computer, a guitar amplifier, or a monitor.

A Thru switch on the side directs the input signal to the amp output. A full version of Amplitude 4 software, a multi-effects processor with an integrated music player and recorder, tuner, and digital replicas of numerous well-known amplifiers and stompbox effects are also included with the iRig HD 2. The iRig HD Pro, which is also made by IK Multimedia, adds microphone capabilities, MIDI In and Out, and a sizable volume knob. This is the Best iPad Audio Interfaces in 2023.

The Shure MVi is a strong contender if you’re looking for a portable, easy-to-use audio interface for podcasting or home recording that won’t set you back a lot of money. It works with iOS 7.0 and later versions, MacOS 10.1 and later versions, Windows 7 and later versions, and Android. A guitar, keyboard, or microphone can be connected using XLR and a 1/4-inch jack. The Class A JFET buffered preamplifier features phantom power, 48 volts through USB or 12 volts via Lightning, and exceptional clarity.

The MVi has five DSP preset settings that automatically alter the volume, gain control, mute, EQ, compression, and limiting. Flat, Speech, Singing, Acoustic Instrument, and Loud are the names of these. Up to 48kHz, 24-bit sample rates are supported. The solid metal casing is 11.3 ounces in weight and measures 2.8 x 4.6 x 3.6 inches. It boasts a sturdy construction that Shure customers have grown to expect through many years of using their products. All of the controls are on the front, and all of the inputs/outputs are on the back. One combo input port (XLR/6.35mm), one headphone output, and a micro USB connector are all located on the rear panel.

A touch-sensitive control panel covers the entire front side. The microphone can be muted or unmuted, phantom power can be turned on, one of five EQ/DSP modes (sing, acoustic guitar, loud, flat, and speech) may be chosen, the input gain can be changed, and the headphone output level can be changed.

Use the ShurePlus MOTIV recording app for iOS devices for all the extra settings. You may also control all the other MOTIV devices using this app (like MOTIV mics). For the best performance, Shure MVi will automatically alter some settings (including compression, EQ, and limiter). The recording’s maximum quality is 24 bit/96 kHz. 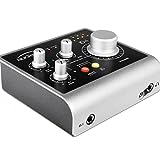 All iOS devices can use the USB 2.0 interface known as Audient iD4. With a few more capabilities, it performs similarly to the Focusrite iTrack Solo. Controls are located on the top of the square, low-profile metal box, making it easier to operate on a desk.

A hybrid 1/4-inch/XLR connector with 48-volt phantom power is used for the mic input. With a maximum gain of 58 dB and a dynamic range of more than 120 dB, the iD4 mic preamp is praised by many customers for being extraordinarily quiet. The instrument input, ideal for guitar or bass, uses a JFET to mimic the input stage of a vintage tube amp.

For the mic and direct inputs, separate level controls are included, along with a blend control and master volume. The output levels are shown by a series of five LEDs per channel, however there are no level indicators for the inputs. The master output knob is converted into a scroll wheel for your preferred DAW by pressing a button. Two headphone ports and stereo line outputs are included as outputs. An additional feature is a speaker mute button. Up to 24-bit, 96 kHz sample rates are supported.

Apogee One - Audio Interface for Vocals and Instruments with Built In Studio Quality Condenser...
Check Price on Amazon

An integrated omnidirectional condenser microphone, Apogee ONE puts a unique spin on portable audio interfaces. The all-in-one kit offers every piece of hardware required to create studio-caliber audio on any iOS (version 6 or later), Macintosh (10.6.8 or later), or Windows 10 device. Smaller than a smartphone and with an oblong shape, the Apogee ONE is incredibly portable and easy to set up next to an iPad on a desktop. A mic clip to attach it to a stand is also supplied.

A stereo three-segment LED input/output level metre is located on top of the device’s single massive multifunction controller knob. A stereo 1/8-inch speaker or headphone output jack is located at one end. The breakout cable that comes with it has jacks on one end with 1/4-inch instrument and XLR microphone connectors, a USB connector, and DC power. Both Mac USB and iOS Lightning cables, as well as a power supply, are included in the set. Alternatively, two AA batteries can power ONE.

The Hi-Z instrument input offers 45 dB of amplification and the built-in microphone preamp up to 62 dB. There is support for sample rates up to 96 kHz/24 bits. Sadly, there isn’t a MIDI connection at this time. The Apogee Maestro control panel software is also included in the package.

The fact that ONE is produced by Apogee, a brand associated with the best audio interfaces utilised in many professional studios, is possibly its biggest selling feature. Another is that all Apogee products are created and produced in the United States, allowing them to interact with suppliers and respond to technical changes more effectively.

Only Apogee Maestro is included in the package. All control options and settings are accessible from a single window. Consider the Apogee Jam Plus if the ONE is a little out of your price range or if you don’t require the built-in microphone.