Arpeggios are a type of music that has been around for a long time. Variations of it can be found in even the oldest classical works. Beethoven’s famous Moonlight Sonata, for example, is an excellent example of an arpeggio in classical music. Arpeggios have become an even more important aspect of modern music thanks to contemporary music producers, and we can’t deny how lively and catchy they sound. And that’s what we’ll be discussing today. 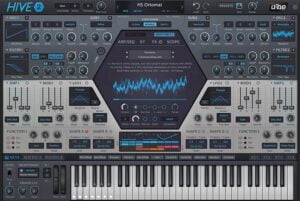 Hive 2 is a one-of-a-kind synth that includes an arpeggiator and a sequencer for creating complex modulations and rhythmic patterns. The plugin has two primary oscillators, each with its own sub-generator. The 12-unit modulation matrix can also be used to modulate most of the parameters.

And, thanks to its Multi-Table feature, the wavetable feature is exciting. A wavetable can be broken into many pieces (up to 16), each of which acts as a 2D oscillator. As a result, if you break a wavetable into three parts, you may either crossfade between them or utilize velocity or multi-sampling to modulate the wavetable inside each part.

With a 3-octave range, 6 direction possibilities, and 4 commands, Hive 2 has a strong arpeggiator section. There’s also a time base, swing, and other options. Similarly, Hive 2 has a 16-step sequencer with gate, transposition, velocity, and modulation assigned to each step. Additionally, you could use the sequencer alone to send out CC data, or you could utilize the Record Mode to enter notes using your keyboard. You can also record the midi into your DAW, which you can subsequently alter if necessary.

The Shape Sequencer can be used to create complex modulations or rhythmic patterns. Each of the four Shape Modulator lanes has a different time base, trigger, and order control. However, you can’t have four shapes for each lane; there’s just one shape per step for all lanes, but you get to choose which ones modulate.

Hive 2 includes some of the best-sounding effect processors available in a synthesizer. Distortion, reverb, chorus, EQ, delay, phaser, and compressor are among the seven effects available. Each effect can be enabled or disabled, and its position on the effects rack can be changed. On the FX page, you can also modulate each parameter.

Given the plugin’s extensive functionality, it’s no surprise that Hive 2 has a steep learning curve. The UI design may appear to be aesthetic, yet it has no effect on workflow. Furthermore, the plugin is a lot of fun thanks to features like four integrated XY Pads for performance and an output scope meter. 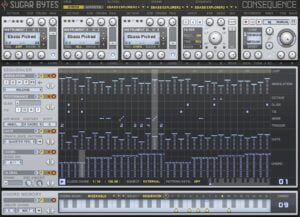 Consequence by Sugar Bytes’ less complicated arpeggiator, but it’s still capable of changing inputted notes in new and unexpected ways. It generates note sequences from chords you play, with a variety of options for interpreting the data. Consequence allows you to load up to three instruments, each with its own envelope. You may use the integrated 32-step sequencer to play these instruments and easily create complex rhythms and textures. There’s even a multi-effects unit onboard to spice up your mixes, as well as a four-on-the-floor kick drum pattern to keep your grooves locked down.

The chord sequencer is where the majority of the activity occurs. You can save up to 16 chord “snapshots” here and trigger them in any order you like. With five sequencers to manipulate various parts of the groove, the results are never static. There’s also a robust modulation section that gives you even more control over the three synthesizer parts, the filter, and the FX unit.

Consequence is one of the most versatile arpeggiators available. Each of the sequencer steps can be adjusted to “Arp,” “Chord,” “Octave,” or “Tie,” allowing you to go far beyond what most arpeggiators can do. You may even change the play direction in a variety of ways, allowing you to make some fairly stunning tunes out of even the most simple motifs.

Many users find Consequence to be a pleasant and inspiring alternative to most basic arpeggiators. It appeals to people who are looking for a new and innovative way to come up with musical ideas. Consequence has demonstrated its worth as a songwriting and production tool for many users.

Consequence, like the other Sugar Bytes plug-ins, offers a unique manner of interacting with source material. Even if you already have a well-equipped arpeggiator, Consequence is worth adding to your collection because of its distinctive workflow. This is one of the Best Arpeggiator VST Plugins in 2022. 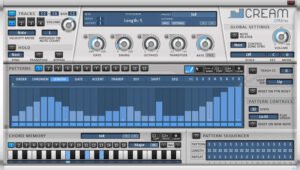 Cream is more than just a MIDI arpeggiator; it also has a number of other features that make songwriting and performance easier and faster. It also features a lot of presets that might help you become creative right away. Finally, it provides sample-accurate performance while consuming very little CPU.

When Kirnu Cream was launched in 2013, it swept the MIDI world by storm. For months, the anticipation and speculation had been growing to a fever pitch, and the actual release was all that everyone had hoped for and more. Cascading arpeggios, sequenced patterns, and an enticing chord memory progression were all produced by the groundbreaking plug-in, which also offered a variety of modulation possibilities. Cream has essentially remained untouched since its inception, which is a credit to its design and functionality. Kirnu Cream is unrivaled when it comes to arpeggiators, lead and bass lines, and even beats.

Kirnu Interactive Cream has a number of qualities that make it equally at home as a live instrument as it is in the studio. Most people are likely to be lured to the arpeggiator. It also boasts one of the most powerful pattern sequencers on the market, as well as outstanding chord memory functions. With four tracks and loopable pattern controllers, pattern data can be freely picked and edited. These characteristics provide the plug-in with a lot of versatility when it comes to rethinking melodies and musical phrases.

Cream is really simple to pick up and utilize. To come up with cool motifs, you didn’t have to delve too deeply into its inner workings, though there is plenty of power behind the hood for more in-depth customization.

Cream’s numerous options for direct contact are what most users value the most. It outperforms most arpeggiators and pattern sequencers, delivering musical and innovative outcomes with minimal effort. The “arpeggio on note count” option, which prevents the arpeggiator from starting until a certain number of notes have been played, is particularly popular. This function allows you to mix and match regular melody lines and arps in a musical way.

Cream should be difficult to utilize, given the amount of power onboard. While some tinkering is required to fully realize its potential, this never detracts from its immense strength and capabilities. This is one of the Best Arpeggiator VST Plugin in 2022. 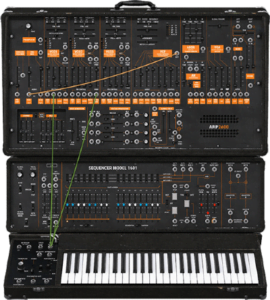 With Arturia’s deep hardware emulation, you can bring Alan R. Pearlman’s 1972 icon ARP 2600 back to life.

The ARP2600 V from Arturia is a semi-modular synth with a UI that is almost identical to the original hardware. The ARP 2500 hardware synth includes three oscillators and one filter with different kinds. Polyphony ranges from 2 to 32 voices. Because of these quirks, Arturia’s plugin offers a significantly broader selection of sounds.

However, because of the modular approach, it may not be the easiest synth to use for beginners. Nonetheless, it comes with over 500 presets and in-app lessons, making learning and using it much easier.

Triangle, sine, saw, square, and rectangle waveforms are released by three oscillators. A noise module, ring modulator, sample/hold module, and mixer are also included. You can use a 24 dB/oct low-pass or a 12 dB multi-mode (LP, HP, BP, notch) filter to pass these signals. There are two envelopes: one for the low-pass filters and another for the amplifier. Unlike the original hardware, which used OSC 2 as an LFO, the ARP 2600 V has its own LFO that is pre-routed for vibrato. You can, of course, route it to another location.

This plugin includes a simulation of the ARP model 1601 sequencer. The design may take you off surprise at first, but it’s actually rather simple to use. You can choose which “bus” outputs the signal each step using the top row of faders (a gate). In the faders below, you can choose between transposition and modulation. This sequencer could be used for note arpeggiation or modulation.

If you don’t already have a modular synth plugin, you should try ARP 2600 V to get a feel for how they work. Because all of the modules are on the UI, it’s really simple to use. You’ll also enjoy it if you like the analog synthesizer sound that Arturia is known for reproducing. You might also want to look into their V-Collection, which includes this instrument. It does, however, necessitate a relatively fast CPU to function properly. Sugar Bytes is recognized for their plug-ins, which may be used as creative instruments as well as audio and MIDI processors. Thesys is a great example, combining all of the company’s skills in a fun step sequencer that also happens to be a fairly fantastic arpeggiator.

Thesys makes use of the time-honored–and still-popular–step-programming model to let you alter your music in a variety of ways. Thesys gives a direct road to creative musical expression, whether it’s for venturing into uncharted musical ground or simply breathing new life into stale, old content.

Unlike other plug-ins that force you to work in a certain way, Thesys allows you to work the way you choose. You might use your mouse to paint in sequences, which is a quick and intuitive manner of working. You could use a MIDI keyboard to input notes if you want a more traditional manner. For this purpose, there is a built-in synthesizer that allows you to hear the inputted notes and the generated sequence without needing to use a third-party synth plug-in.

The Randomizer is a very valuable function, since it helps you escape the predictability that step-sequencers and arpeggiators often produce. You can use this tool to create fascinating variations of your melodic material or to go in completely new ways. You’ll probably spend the most time modifying the Velocity and Gate Sequencer parts. Without a lot of fussing, you can turn riffs and arpeggios into remarkable musical phrases in these areas.

Thesys has considerably more features than your typical arpeggiator plug-in. It was just as useful in a live situation as it was in a studio setting, according to users. This is one of those plug-ins that produces more than it takes in, and many users find it a joy to use for enlivening dreary MIDI passages.

Thesys is more than a step sequencer or an arpeggiator. It’s essentially a full-fledged MIDI workstation, and you’ll be blown away by its power and adaptability.