A British amplifier company with a long history is called Vox. Over the years, a number of well-known guitarists, including George Harrison and Brian May, have used their amplifiers. It can be challenging to choose from their wide selection of amps because they cater to both professionals and novices. I’ll walk you through every Vox amplifier that is currently on the market in this article so you can really zero in on what you want.

Vox has a very deep history because it has been there since the 1950s. The company has become a global icon and is closely associated with the British invasion musical movement of the 1960s. Almost everyone has used a Vox amp at some point, including well-known acts like The Beatles, Oasis, Paul Weller, Hank Marvin, Radiohead, etc., as well as lesser-known acts like My Chemical Romance, Brian May of Queen, Matt Bellamy of Muse, All American Rejects, Stone Temple Pilots, Foo Fighters, and many others.

Any adequately equipped recording studio will likely have an AC30 or AC15 stashed somewhere if you visit. While it is true that Vox produces amps that are excellent for traditional rock and pop performers, their line-up includes amps that are suitable for essentially every type of player.

The handwired 30-watt Vox AC30HW2X combination guitar amplifier will take you back to the heyday of Vox tone. The AC30HW2X has a vintage fawn-colored vinyl over a birch ply cabinet and a retro ox blood grill cover. It has a conventional 2-channel design with a hot/cool switch for the top boost channel and a bright switch for the normal channel. The AC30HW2X’s core is an expertly handwired turret board assembly that houses three ECC83/12AX7 preamp tubes, four EL84 power tubes, and a GZ34 rectifier tube. These matched Ruby Tubes deliver flawless tone and a wide dynamic range. The AC30HW2X’s OP mode switch, which decreases the output power level in half, is a fantastically modern feature that enables you obtain the traditional tone you desire at a lower level, even though a pair of 12″ Celestion Alnico Blue speakers offer another vintage touch.

The AC30HW is one of the best VOX tube amps you can buy because it is hand-wired, as indicated by the HW in the name. With a top boost and regular channel with a bright switch, the controls are similar to those of the other AC series models. However, these have a slightly cosier and more adaptable personality, resembling a more conventionally antique tube amp. A distinctly modern feature in an otherwise old look, the ability to decrease the power in half is another thing we enjoy. The amp is pricey since it is hand-wired, but if you want VOX quality, this has to be among your top choices. This is the Best Vox Amp in 2023.

The recognisable chime and intricate grind of the Vox AC15 Custom are delivered. It continues to be utilised on stages and in recording studios all over the world. This 15-watt combo amp was one of the first to define the British sound. The 15-watt design of the AC15 Custom provides moderate loudness in a live setting while still being able to overpower the band. Additionally, the Celestion Greenback 25-watt speaker muffles high frequencies. Grab this AC15 Custom if you want a Vox with an appearance that is both unique and old.

The VOX AC15C1 is a 15 watt tube-powered combo amp with two channels for a respectable level of flexibility and a bright and crisp tone profile. Although the regular channel just lets you adjust volume, the two channels are described as Normal and Top Boost. Along with a master volume and tone control, reverb and tremolo effects can also be adjusted.

It’s still one of the more constrained dual-channel amplifiers we’ve tested, and we wish there were more controls or perhaps a mids knob. However, it’s important to note that the amp’s overall tone is rather good, particularly if you frequently play over a clean signal.

If that’s the sound you’re after and you don’t intend to do a lot of EQ tinkering, the AC15C1 is probably your best value option out of the complete VOX lineup because it is brighter and snappier, which is part of the appeal of VOX amps. This is the Best Vox Combo Amp in 2023.

The iconic Vox panache of the AC10C1 produces all-tube tones, from chimey cleans to vintage Top-Boost crunch! This amplifier powers a Celestion V-type speaker with 10 strong watts. You may adjust piercing tones at bedroom-friendly volumes with the straightforward control set of a master volume, a 2-band EQ, and a gain knob. Don’t let its bulk fool you, though! When pushed to the limit, the AC10C1 really cranks, making it ideal for coffee shop gigs and other situations where a larger amp might be too much. The built-in digital reverb, which beautifully replicates the charm of a vintage spring reverb tank, provides some space to your sound and gives it some depth.

Gain allows you to adjust the loudness of your preamp, which is convenient. Before you reach the master volume and reverb controls of the power amp, there is only a two-band EQ. The AC10C1 can be a wonderful choice for you if you want straightforward amplifiers with set-it-and-forget-it functionality, especially if you utilise pedals to give your sound additional control. However, the AC10C1 is definitely too restrictive if you’re looking for adaptability and flexibility. The same is true with the AC15C1, however you’ll need to mic this amplifier if you wish to run the sound somewhere else. This is the Best Vox Amplifier in 2023. 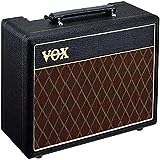 The Vox Pathfinder 10 is an entry-level amplifier made by Vox. It is a two-channel solid-state amplifier featuring a two-band EQ (bass and treble). It is a fantastic practise amplifier with a 10W power level that is ideal for use at home. It is headphone compatible and only weighs 10 pounds.

The Pathfinder 10 is the ideal amp for at-home practise, backstage warming up, and recording thanks to its robust yet always tonally rich 10-watt output. You may quickly switch between clean and unclean sounds using the clean/overdrive switch. Simply pressing this switch will transform your sound from crystal clear clean to Vox’s distinctively warm distortion, or from a slightly bluesy tone to a high-gain, modern-rock roar.

If you don’t want to disturb your neighbours, practise late at night. No issue! Your sleeping neighbours won’t hear a thing if you simply put your headphones into the headphone/line-out jack because doing so immediately mutes the amp’s speaker! This connector can also serve as a line-out that has been specifically filtered, making it ideal for recording your amp without having to worry about putting any bothersome microphones in place. Along with gain, treble, bass, and volume settings, the Pathfinder 10 also has a clean/overdrive switch.

To deliver true tube power amp performance, the Vox VT40X modelling guitar combo amplifier combines cutting-edge digital technology with an original analogue design. When designing the VT40X, Vox examined real amp circuits and components, which is why each of the 11 amplifier types sounds so authentic. Since a multi-stage Valvetronix tube preamp uses actual tube circuitry, you can hear the finer details of a tube guitar amp. The Vox VT40X modelling guitar combo amplifier offers an extremely powerful tone that far exceeds its tiny size thanks to a securely sealed cabinet, a skillfully built bass-reflex construction, and 13 iconic stompbox effects.

Instead of simply simulating the sound of guitar amplifiers while creating the VT40X, Vox used VET (Virtual Elements Technology) to dissect each amp down to its individual parts. The end result is a precise replication of each model’s attributes. A multi-stage tube amplification circuit is included into a Valvetronix preamp to give you the unmistakable distortion, responsiveness, and tone qualities of an old-school tube amplifier. To replicate the sonic variances between Class A and AB, the effect of bias values on tone, and the variations in dynamic response of tubes, the VT40X’s power amp stage blends a special analogue circuit with a high-performance digital power amp.