The demand for analog emulation plugins has gotten a lot of attention. It goes like this: digital audio is too exact, lacking charm, character, and…wait for it…warmth! The truth is that digital music isn’t necessarily chilly or monotonous, and there are numerous methods to add movement and warmth without leaving the box.

Magnetic tape was, as you may know, the standard recording medium for decades. Although its popularity waned as digital technology took hold, it never completely vanished, and in the last decade or two, it has had a strong rebirth. Similar to tubes, the sound properties are praised as “warm” and “musical.”

Any seasoned audio engineer will tell you that analog tape’s natural compression and additional harmonic richness make for amazing recordings. Although digital recording technology has many advantages over an all-analog studio, the acoustical superiority of recording sounds directly to tape still stands — or does it? Let’s take a look at nine of the greatest tape emulation plug-ins for infusing analog-tape charm into your exact digital recordings. The Softube Tape gives your mixes more coherence and weight to the audio quality. Tape, on the other hand, goes much beyond a simple tape machine emulation. It comprises three separate tape machine models, all of which provide the ease of use and low CPU load that today’s music makers deserve.

Computer-based professional studios still run their mixes via at least one generation of analog tape, even in this day and age. Why? Because analog tape has a smoothing effect and adds coherence and weight to a mix like analog circuitry, even when utilized subtly, it transforms a recording from a collection of separate sounds into a song in which everything is related and works together like artificial intelligence. All of this and more is possible with Softube’s Tape plug-in.

Three separate machines are simulated inside, each with its own tone-shaping properties. The ‘Amount’ control is front-and-center, and it’s where the saturation happens. “WARNING: HIGH AMOUNT CAN LEAD TO DESIRED DISTORTION,” reads the plaque underneath. Softube isn’t afraid to admit that Tape is a saturation machine.

Despite stiff competition, tape saturation plugin would be the apparent winner if this were a’shoot out’ to identify the meanest tape sim in the west. The tape distortion sound is immediately stunning, and it coaxes a lot of personality out of your sounds. Even at the highest saturation levels, the images show such clarity and detail, which appears counterintuitive.

At first glance, there appear to be only three knobs, but clicking on the right side brings up a’remote control,’ which includes a’stability’ knob for wow and flutter in the style of Boards of Canada. This tape plugin is a delightful surprise that is easy to overlook; it serves as an excellent reminder to read the manuals for all of your plugins! To top it all off, there’s a ‘Stop’ button that may be used to automate traditional tape stop effects like reel to reel machine. This is the best tape emulation plugin in 2022. 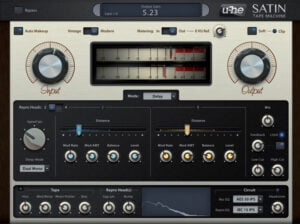 The best tape emulation plugin is u-he Satin. The U-He Satin not only sounds wonderful and has a ton of tone shopping options, but it also lets you imitate the tape sounds of a range of historical tape machines.

u-well-known he’s software synthesizers have established themselves as excellent analog magic emulators. The Satin tape machine plug-in demonstrates their expertise and attention to detail, going beyond fundamental tape features like compression, wow, and flutter to give you control over more esoteric factors like tape formulation, gap width of the tape heads, companding, and more. Satin also makes it simple to “glue” dissimilar tracks together, even if they aren’t part of the same submix group, thanks to its ability to handle many instances from a single plug-in panel.

One of the most important variables in determining the tape’s sound, as I mentioned earlier, was the amount of volume on it. As a result, the tape input and output controls are the first place to look. Satin also does an excellent job at simulating how tape compresses and saturates in response to higher signal levels.

Satin also has the ability to be utilized in a group mode, with up to eight slots. As an example, you may assign group 1 to the kick, snare, and overheads. Any changes you make to group 1 will then be applied to all instruments in that group, allowing you to quickly dial in a killer sound.

Satin can be used as a retro tape delay, flanger, or chorus, just like many of these tape plugins. Furthermore, it simulates the noise reduction function found in many tape recorders, which may be tweaked/abused to create some seriously fantastic noise tone shaping and compression sound quality. This is the best tape emulation VST in 2022. 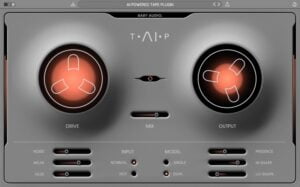 Baby Audio developed an AI-based system to capture the audio properties of magnetic tape in order to create TAIP. TAIP presents the essence of tape magic in a simple and adaptable plug-in, rather than focused on re-creating the sound of one certain brand of tape or tape machine. You may saturate low and high frequencies independently, great for adding punch to bass without boosting high-end presence, and even make old-school tape-flanging effects, in addition to re-creating classic tape effects like Noise and Wear. Baby Audio TAIP is a simple yet powerful solution for adding analog colour to single tracks, submixes, and entire mixes.

For a hardware emulation project like TAIP, AI provides an alternative to the usual DSP process, which Baby Audio believes is more authentic. TAIP may use AI / neural networks to accurately decipher the sonic properties that make a tape machine sound and behave the way it does, where a regular DSP simulation would have to ‘guesstimate’ the effect of multiple analogue components and their mutual connections. This is accomplished by feeding an algorithm diverse training data of dry vs. treated audio and teaching it to recognize the specific properties that distinguish the two. TAIP can apply these changes to new audio once the AI has learned them.

For a plugin that produces analogue sound, this technique may appear too digital. However, the terms “analogue” and “digital” refer to two essentially different realms. It helps to think like a computer in order to get it to behave (or sound!) in a certain way. Re-creating a ‘analogue-style’ signal path in DSP entails approaching the problem from a human perspective. The AI technique aids in solving the problem in the same way that a machine would, resulting in a more accurate emulation. This is the best tape emulation plugins in 2022.

Sketch Cassette II is the greatest vst tape emulator currently available. This plugin is ideal for generating the sounds of an indie rock band. It is supposed to emulate the sound of consumer tape on cassette tape, similar to the Tascam 424 feature.

SketchCassette II comes with 12 distinct cassettes, each with its own set of powerful setups that allow users to create a variety of videos. You may also use the age modeling controls to acquire controls for older or older models. SketchCassette II adds a variety of lo-fi effects to your mixes; the plugin now has a full spectrum of low-cost tape sounds as well as control and freedom to push sounds higher.

When you first open the cassette of this plugin, you will be astonished by its simple design, which hides a wealth of useful features. It can create lo-fi, wow & flow, and completely saturated sounds, and the producers go over and above to provide musicians extra features.

Sketch Cassette II may be my personal favorite of the bunch. It’s made to sound like the Tascam 424 and other cassette-based tape recorders. This plugin is a tone shaping behemoth that’s ideal for achieving that garage rock indie band vibe. If you are looking for a plugin that is basic and straightforward to use, this is just what you need. The last time we checked, the price of this plugin was around $30. 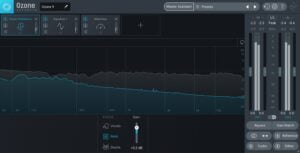 Ozone is also a fantastic plugin for the master producer; it is an industry-standard plugin that has been developed by several specialists. This software can help you get your recorded tracks from the mixing stage to the release stage. It enables you to create and manipulate sound or tune in a simple, direct, and distinctive manner. You’ll stand out like a thorn in the side of another competition.

When you first open the Ozone in the Daw, you’ll see a simple and basic layout with numerous useful visualizations. With the advent of vintage tape module in Ozone 9, you’ll be able to observe a master assistant far better than before. This mode uses the Vintage, Limiter, Comp, and EQ modules rather than their current versions. Producers in the rock, jazz, and other “live” genres have praised these enhancements. In CD mode or Streaming mode, you can now choose from LUFS targets.

While some of the product’s most impressive capabilities, such as Master Rebalance and Tonal Balance Control, are only available in the Advanced edition, the other versions’ overall potential and use are not diminished (Elements and Standard). This updated module was built by Ozone 9 to give their digital collection a tape-like feel. Vintage Tape examines all of a tape machine’s flaws, including colour, phase effects, saturation, noise, and pitch shifts. To accentuate the low/mid-frequency range, a completely new saturation mode (7.5 IPS setting) has been created. This will provide the warmth and thickness that we all desire. Choose whether to use even harmonics to create warmth, or odd harmonics to add presence.

Some of the product’s best features, such as Master Rebalance and Tonal Balance Control, are only available in the Advanced edition. The plugin as a whole, though, still offers a lot of potential and utility. Furthermore, the Vintage Compressor and Vintage EQ may give a lot of depth and warmth to your mix; you can alter slight high-end softening and harmonic saturation with the tape saturation option to get the ideal vibe. If you’re looking for a good plugin for your studio, Ozone 9 is certainly the best tape machine plugin.

Sound engineers were liberated in many ways by the introduction of digital audio recordings, which were not conceivable in the analogue age. Even with all of the resources at their disposal, musicians and engineers lamented the sound and sonics of previous recordings. The enchantment that was inadvertently conveyed by the recording mediums, and which was taken for granted.

Reelight Pro is a plugin that recreates the real tape sounds of not one, but six popular Tape Machines at various speeds and levels, bringing us even closer to the “reel” sound of tape. You also get distinct settings for desirable aspects like tape speed, bias, input saturation, crosstalk, and even the compression imparted by tape with this plugin! The plugin comes with a number of presets to get you started, or you can create your own from scratch!

In addition to DSP modeling, Tone Empire has created advanced Dynamic IR (Impulse Response) solutions that allow us achieve the true sound of tape recorders like never before.