Let’s get something straight right away. For rap vocals, there is no ideal preamp. In truth, no microphone preamps designed expressly for rap are available. The trick for rappers, like any vocalist, is to discover the preamp and mic combination that works best for their voice and vocal style.

Transparent preamplifiers authentically and clearly transmit the incoming audio signal. They make as little change to the sound as feasible. You can rely exclusively on the microphone to colour your voice in this manner. Use a microphone that makes your voice sound warmer, for example, if you desire a warmer sound. The preamp isn’t going to affect anything.

And therein is the challenge: each voice is distinct, requiring a particular microphone and preamp combination to bring out its greatest qualities. Without hearing the voice in question, it is hard to provide a recommendation. It becomes considerably easier if you use a transparent preamplifier. That’s why my favourite microphone preamp for rappers is one that doesn’t colour your voice in any way. It reproduces the supplied sound in crystal clear detail.

The Grace Design m101 mic pre is a reworked version of the wildly popular Model 101 mic pre. For maximum signal clarity, the m101’s signal channel includes 0.5 percent precision metal film resistors. Onboard is a 12-position gold-plated rotary gain switch, as well as a higher-performance output line driver and HPF amplifier. Ribbon mode, with enough of boost and a relay bypass de-activating phantom power to safeguard your ribbon mics, is also new on the m101. With the m101, the power source is now integrated in, removing the need for a wall wart.

The Grace m101 is a single-serving version of Grace Design’s critically praised microphone preamplifier. Inside and out, the Grace m101 has been updated. The exterior, which was previously silver, has been replaced with a sleek black finish. The m101 is similarly transformerless and perfectly balanced, with no electrolytic capacitors in the signal path. In the signal path, there are 0.5 percent precision metal film resistors and a 12-position gold-plated rotary gain switch. The Grace m101 is extremely natural, musical, and detailed, thanks to its tremendous bandwidth, headroom, and resolution. The Grace m101 also has a ‘Grace Designed’ wide gain range input (10-75dB) for gain-hungry ribbon microphones.

The Grace Design m101 mic pre is also entirely durable and roadworthy, allowing discriminating live musicians to create studio-quality sound with their live setups. The Grace m101 mic pre may be rack mounted in a typical 1U rack tray, and two devices can be stacked in one rack space. The Grace model m101 achieves results previously only attainable to huge budget studios and Grammy-winning engineers, whether it’s boosting a vintage condenser mic or an acoustic guitar. For about $1000, the Grace Design m101 mic pre might be the ideal microphone preamplifier. This is the Best Preamp for Rap Vocals in 2023.

The Focusrite ISA One is a great way to tap into the Forte console’s legacy in a small, portable package. The ISA One is based on the original ISA 110’s topology, which includes the Lundahl L1538 transformer and Zobel network. All of the bases are covered with inputs for microphone, line, and instrument-level sources. You may also dial in the response you need using a variable impedance selection. The instrument- and microphone-level inputs on the ISA One also run in parallel, allowing you to combine the direct signals.

Focusrite’s ISA preamps are designed to emulate the iconic Forte console’s original performance and sound, which is widely regarded as the pinnacle of analogue recording. This preamp design is available in a portable desktop form factor with the ISA One. When you need to track somewhere else, you don’t have to worry about un-racking and re-racking your gear. Forget about hiring a team and a vehicle to transport a Forte! You can now simply take your ISA One and go.

The ISA One’s microphone input includes impedance matching, which is a fantastic feature. Because so many mics prefer a distinct preamp impedance, one size does not necessarily suit all. You’ll be ready with the ISA One. To match the mic you’re using, you can choose from four different levels. Alternatively, defy the rules and find a “incorrect” sound that suits your purposes! The ISA One will protect you no matter which mic you use. 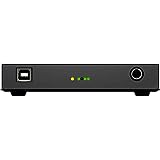 While the small MADIface USB is about as basic and elegant as it gets, RME’s TotalMix software mixer gives you remarkable flexibility over inputs, outputs, mix settings, and more. Not only do you have unlimited routing of inputs and outputs at Sweetwater, but you can also split and distribute signals to numerous outputs at the same time. You can even use peak and RMS level metering to control the gain levels on a large number of tracks.