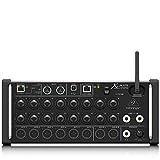 You’re probably attempting to find out what to look for in a higher track audio interface if you’ve found yourself in need of additional simultaneous channels when recording. The functions to prioritize in a 16-channel interface will, as is customary, be determined by your situation and needs.

Today, I’ll go over three distinct audio interfaces at various pricing ranges, each with its own set of strengths. All three are among the best in their price range, and they can all capture high-quality audio. As a result, all of the products I’m going to recommend today can record at least 16 simultaneous inputs. Some will be able to handle more, but they will all be able to handle 16 inputs. 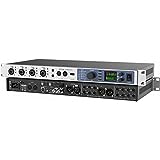 The RME Fireface UFX+ is a powerful audio interface that can handle up to 94 channels of I/O. The Fireface UFX+ builds on the renowned powers of its predecessor by adding MADI I/O, enhanced DSP, and ultra-low-latency Thunderbolt connectivity. Upgraded AD/DA converters and enhanced analogue I/O circuits produce results that are incredibly clear. With the Fireface UFX+’s four high-grade mic preamps, which have a maximum input level of +18dBu and a gain of 75dB, you can easily handle crucial recording conditions. The Fireface UFX+’s DURec connector allows you to record 76 simultaneous audio channels to a thumb drive. The RME Fireface UFX+ belongs in the studio’s heart.

Its wide connectivity, the RME Fireface UFX+ can handle any audio task you throw at it. Its 94 input and output channels include 12 analogue channels (including four high-quality mic/instrument preamps), 16 ADAT channels, two AES channels, and 64 MADI channels. The Fireface UFX+ uses Thunderbolt technology to deliver PCIe-like audio performance, with the lowest latency, system overhead, and CPU load you’ll find in a thunderbolt audio interfaces. The Fireface UFX+ also has a USB 3.0 port, making it compatible with machines that don’t have Thunderbolt. Impedance is low. Hi-Power headphone outputs have a maximum output level of +19dBu, providing enough of power for any pair of headphones, high or low impedance at unbeatable price points for your home studio.

When it came to designing the Fireface UFX+, RME went all out for audio recordings. Improved SNR and THD values, as well as upgraded AD/DA converters and analogue I/O circuits, result in astonishingly transparent sounds. And you’re hearing exactly what was recorded through your monitors for phantom power. The mic pres on the Fireface UFX+ are likewise outstanding, with a maximum input level of +18dBu and 75dB of gain, which is more than enough to handle any source. Jitter isn’t an issue with the Fireface UFX+ because it uses RME’s famous SteadyClock technology. This is the Best 16-Channel Audio Interface in 2023.

The cutting-edge X Air digital mixers from Behringer connect to your iPad or Android tablet for unrivalled mixing capability and mobility. Connect your mic and line level sources, then use the free remote control app to mix from anywhere in the venue or studio with usb audio interfaces. The XR18 is an 18-input, rackmountable stage box unit with 16 Midas-designed gain-programmable microphone preamps, two hi-Z inputs, Behringer’s renowned X32 effects rack, a 100-band Real Time Analyzer on all channel and bus EQs, an 18 x 18 USB interface, and integrated Wi-Fi, all housed in a convenient rackmount chassis. With the addition of microphones, you’ll have everything you need to mix a live show and record immaculate multitrack sessions directly to your DAW using a number of inputs. The Behringer XR18 allows you to mix in a whole new way.

The XR18 from Behringer is the ultimate in mixing mobility. Imagine being able to mix from the most convenient location in the house at all times! The XR18 recognises the realities of modern live mixing: you don’t want to be confined to a single front-of-house mixing spot. Without the need to set up and configure an external router, integrated Wi-Fi allows you to control the mixer’s features remotely from your tablet or laptop. Now you can concentrate on your mix while roaming around the arena to hear what your audience is hearing from any seat in the house. From the balcony, adjust the mix. Adjust the monitors from the perspective of the performers. This is how live mixing should be done: natural and intuitive.

The XR18’s wireless connectivity makes it simple to tweak a monitor mix from the performers’ point of view, but why not let them mix their own IEMs or floor wedges? An Ultranet connection on the XR18 allows for straightforward audio routing over Cat 5e cable to other Ultranet-compatible hardware. Because it’s compatible with Behringer’s P16-M Personal Monitoring System, you can focus on making a fantastic house mix while the performers handle the monitor mix (believe us, they’ll appreciate it). That’s what I’m talking about when I say “smart mixing.” You’ve got it covered with 16 channels of personal monitoring and six aux sends to feed stage wedges, delayed mixes, or secondary rooms. If you’ve got enormous stadium shows planned, you’ll be happy to know that the XR18 can easily be integrated into a larger system by connecting it to a wired network or a monster router via its Ethernet connector. This is the Best 16-Channel Audio Interfaces in 2023.

Check out the MOTU 16A hybrid audio interface if you’re seeking for a system that can handle a wide range of professional audio applications. The 16A provides an excellent conduit for your outboard microphone preamplifiers and other studio gear, with 16 balanced analogue inputs and outputs, as well as an extra 16 channels of ADAT I/O on optical ports for multi-channel mic pres and more. Latency isn’t an issue with the 16A thanks to Thunderbolt connectivity, but the integrated DSP mixer provides latency-free monitoring and mixing. MOTU’s AVB Ethernet allows you to network several AVB interfaces to your 16A, and advanced features even let you to use it as a standalone, iPad-controlled digital mixer.

The 16A is no different. With a self-noise level of -110dB THD+N and a dynamic range of 123dB (A-weighted, 20Hz-20kHz), the 16A’s 16-channel analogue I/O provides some of the cleanest audio available, and an extra 16 channels of digital I/O through ADAT optical ports brings your total channel count to 32 x 32. MOTU supplied the 16A ultra-fast Thunderbolt connectivity (in addition to USB 2.0) to go with this remarkable array of high-quality I/O, so you get epically low system latency as well.

Granted, system latency isn’t an issue with the MOTU 16A’s lightning-fast Thunderbolt connection, but the onboard DSP mixer still has a lot of advantages you’ll find handy in a variety of situations, such as when you’re connected through USB. For starters, this digital mixer can handle up to 48 inputs (through AVB expansion) and 12 stereo buses, allowing you to create incredibly complicated routing schemes without the need for a computer. In fact, if you connect a wifi network to your 16A, you can use an app on your iOS smartphone to access all of its internal mixing functions, including effects and processing, thus turning this powerful audio interface into a standalone mixer. When it comes to onboard processing and effects, the 16A’s DSP EQ, compression, gate, and reverb will come in handy whether you’re in the studio or onstage.

Another fascinating feature of the 16A’s Ethernet connection is the possibility to connect it to other MOTU AVB audio interfaces. This can be done in one of two ways: directly via an Ethernet wire or as part of an audio network using one or more MOTU AVB Switches. You may quickly connect a second 16A or other AVB compatible device to your first one using just a single Ethernet wire. You may establish an audio network of up to five units using MOTU AVB Switches, potentially connecting hundreds of channels of I/O across numerous rooms. Latency and cable runs aren’t an issue because it’s all done over normal Cat-5e Ethernet cable.

Place the Universal Audio Apollo x16 in the heart of your studio, and your productivity will skyrocket. Thanks to UA’s powerful 6-core HEXA Core CPU, you’ll be able to track and mix with 50 percent more processing power than prior Apollos. The Apollo x16’s enhanced elite-class AD/DA conversion and Dual Crystal clocking deliver top-shelf sound quality. Native 7.1 surround monitoring, configurable +24dBu operation, built-in talkback, and more are all features that pro users will love. Aside from that, with to the Apollo x16’s ultra-fast Thunderbolt 3 interface, you get sub-2ms latency and plenty of expandability.

The Apollo x16 Heritage Edition includes a premium suite of ten award-winning plug-in titles, as well as the Realtime Analog Classics Plus package, which gives you accurate emulations of vintage analogue gear. Finally, the Apollo x16 is compatible with Universal Audio’s LUNA software, allowing you to create a fully integrated recording, editing, and mixing environment that includes full software-based control over your interface’s parameters, global console and tape emulations, and advanced real-time tracking. If there was ever a moment to upgrade to the most recent Apollo, it’s now!

There are instances when your computer’s power and speed are insufficient to handle all of the plug-ins required for your recording session. That’s where the 6-core HEXA Core CPU from UA comes in. This CPU generates 50% more power than the previous model. This means you can use Neve, Manley, or API channel strips to track in real time, or use a huge number of UAD plug-ins while mixing in your DAW. 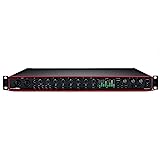 The Focusrite Scarlett 18i20 is a third-generation Focusrite Scarlett that packs a lot of punch into a small package. Two bright Focusrite mic/instrument preamps are exactly where you need them on the front panel, while the back panel houses a load of extra I/O – up to 18-in/20-out at once! There are six more XLR combo inputs on the back, as well as eight channels of ADAT I/O, S/PDIF and MIDI I/O, and word clock out. Focusrite ensured that the Scarlett 18i20 has all of the features you’ll require. The Focusrite Scarlett 18i20 is a solid foundation for serious project studios that may need to expand in the future, with an onboard talkback to communicate with talent, 8-channel LED bar-graph metres, dual headphone outputs with independent level controls, and speaker switching for dual-monitor setups. Connect the device, launch the included software, and you’re ready to go.

The exterior of the Focusrite Scarlett 18i20 has been redesigned for the third generation audio gear for audio signals. Scarlett 18i20 has been modified and optimised under the hood to give greater sonics, lower latency, and improved ease of use. With sample rates up to 192kHz, you’ll have studio-quality sound that you can carry with you everywhere you go. Focusrite’s famed Air circuit has been added to their already incredible Scarlett mic preamps. The instrument inputs have also been redesigned to accommodate the most powerful active pickups. Finally, the Scarlett 18i20’s inputs and outputs have wired analogue safety circuitry to protect your interface from destructive power surges.

When you have a great-sounding monitor mix with everything you need to be inspired — for example, reverb and delay on a guitar solo — you know you’re performing better. Because of the Focusrite Scarlett 18i20’s ultra-low latency, you can monitor in real time with native plug-in effects, allowing you to hear your parts exactly as you imagine them and record superior performances. Sweetwater understands that you can’t put a price on that. Simply engage the Direct Monitor circuit if you want the simplicity and convenience of monitoring your input directly with guaranteed low latency. A pair of virtual loopback inputs let you record a stereo feed from any combination of hardware input and software playback channels, making podcasting, live streaming, and sampling a breeze.