Reaper is a well-known digital audio workstation made for professionals to use when creating music. Due to its lengthy trial period and affordable price, the recording software is also a popular choice among novices. You can just download the DAW and begin creating music.

However, you’ll need an audio interface if you want to record sounds into the app utilizing microphones and musical instruments. A device with numerous inputs and outputs created specifically for that purpose is an interface. Audio interfaces are available for anywhere between $50 and thousands of dollars, which is a fairly wide price range. Additionally, since each of these devices has a variety of characteristics, there is a suitable option for every specific use-case and audio production workflow.

The Scarlett Solo and Reaper recording software might go well together. It only has one XLR and one instrument input of each kind, but Focusrite quality is excellent. The software and plugin package that comes with the interface, in our opinion, is one of the best on the market. The Focusrite Scarlett Solo audio interface, produced by one of the most well-known names in the music business, is well-liked because it offers excellent sound quality, useful features, and an affordable price.

The Air mode is a feature of this audio interface. When activated, it will imitate the famed Focusrite ISA mic preamps’ mid-range boost and give your sound a more potent high-end tone. This audio interface has some of the highest-quality preamps in its pricing range. They provide a phenomenal frequency response. includes the Focusrite Red Plug-In Suite, a plug-in collection renowned for its superb analog sound.

The XLR input is the only area we believe may be improved. The Scarlett Solo’s input is a normal one, unlike the combo style XLR found on the majority of modern audio interfaces that can accept both XLR and 14 jacks. This is the Best Audio Interface for Reaper in 2023.

We enjoy the MOTU M4 since it has a lot of features that are hard to get at this price point. For instance, the built-in LCD screen and the ability to input in external hardware effect units. However, for smaller home studios with fewer inputs and outputs, it might not be worthwhile to spend more money on the M4; instead, we advise choosing the MOTU M2.

With their mixing desks, MOTU has been supplying professional recording studios all around the world for many years in the music industry. The M4 is expected to increase accessibility to this expertise and offer sound quality and practical features in a small package. This audio interface’s front-mounted LCD screen makes it simpler to check levels and gain-stage before recording. The Line Out ports on this audio interface can be used to connect external hardware effect units, and the Line In ports can be used to feed the output back in. On devices in that price range, it is uncommon to find such a function.

Studio monitors can be connected to this interface via one of two designated outputs: RCA or 14 wires. This audio interface comes with a remarkable number of free extras, including plugins, samples, and loops. 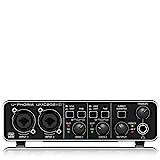 The U-Phoria UMC202HD, another audio interface in the $100 price range, is a reliable small device for all your recording requirements. It offers higher-quality MIDAS preamps and more diverse inputs than the Focusrite Scarlett, which is a charming feature given its price range. Despite not being the most well-known DAW, Tracktion can be used in a variety of composing contexts. Another pleasant perk of purchasing this interface is the availability of over 150 free plug-ins.

While some contend that the Focusrite Solo has better functionality and preamps than the U-Phoria, several users have mentioned Windows device driver difficulties. However, many people have also reported having no problems all with Behringer’s firmware or customer support, so your experience may differ.

The Behringer U-Phoria UMC202HD USB 2.0 audio interface stands out in part due to its authentic MIDAS preamplifier technology. MIDAS preamps are among the most well-liked mic pres on the planet because they are renowned across the live sound industry for delivering incredibly clear sound with plenty of headroom. Additionally, these preamps have +48V phantom power built right into them, allowing you to use any high-quality condenser microphone with your U-Phoria UMC202HD. 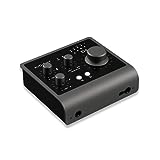 This USB audio interface is quite outstanding and will be fantastic with Reaper. The Audient ID4 MKII is the greatest audio interface for Reaper, despite being somewhat more expensive than some alternatives due to its unique features like the Virtual Scroll and the sound quality combined with extremely low noise while recording (in our opinion).

We were pleasantly delighted by this audio interface in previous reviews, and we firmly believe that Audient deserves more credit. There are a few features that are exclusive to this device, such the virtual scroll, despite the fact that it is more expensive than most.

Dual headphone outputs, one for 14 jacks and the other for 3.5mm jacks, are provided by this USB audio interface. When recording musicians and artists, this can minimize the need for adapters and be helpful.
The simulated scroll is one of this interface’s most remarkable elements. It converts the large central knob into a fully working MIDI controller that can be used to modify parameters inside of Reaper. It’s simple to access information on Audient’s website, and they are quite open about the parts utilized to construct their products.