For the ordinary home producer or songwriter, there are many obvious benefits to using string samples rather than actual ones. Booking studio time and hiring musicians is expensive and time-consuming, just from a logistical perspective. However, using samples, you may create string arrangements from the comfort of your own bedroom. There isn’t a library that matches every demand, but the top orchestral string VSTs have amazing quality, and there is enough diversity to meet most requirements.

Orchestral groups and string quartets are excellent acoustic tools for making your music stand out. They enrich any music, regardless of style, by adding character, dimension, and depth. For instance, excellent pop songs like “Yesterday” by The Beatles or “Viva La Vida” by Coldplay. Without the orchestra supporting them and providing the ideal ambience, they wouldn’t have the same impact.

Symphonic orchestra can be challenging to have an entire ensemble at your home studio, but thankfully, plugins and sample libraries are widely used in the twenty-first century. In the past, recording that many musicians required a sizable studio, top-notch microphones, and a big number of available players. These days, only software developers do this effort; they promise to accurately capture each instrument’s spirit so you can utilize it however you like. 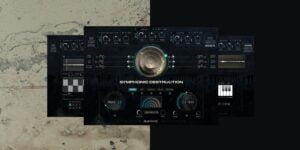 By fusing established combinations, embedded sound design, and profound braams in a single library, Heavyocity’s Symphonic Destruction produces novel outcomes for hybrid orchestral composition. In order to deconstruct the symphonic ensemble as we currently know it, all sounds will be new and updated. You may build countless soundscapes using a vast array of cinematic components, such as full orchestral portatos and detuned staccatos, while yet preserving the very large sound that only an orchestra can produce. So be prepared to immediately share your wildest, most bold thoughts.

You can choose from three different orchestral tools types offered by Symphonic Destruction: “Performers,” which are instruments with key switches that can switch between different sounds; “SD Designer,” which is made for deep sound designing; and “SD Loop and Braam Designers,” which are similar to the previous type but made to playback and layer any loops or braam noises. Two cherished effects are combined on one page in the section titled “Space.” In the anthology strings, you’ll find a delay and reverb that can assist you in creating the right atmosphere and acoustic feeling in your virtual instrument. While the reverb has only three commands (Delay, “Size,” and “Mix”) and all impulse responses are fairly fixed in their character, the delay has five separate controls (On/Off, “Time,” “Feedback,” “Width,” and “Amount”) that can be adjusted at your discretion.

Each sample was captured using three different microphone positions, so you can adjust the garritan personal orchestra whatever you like for sound quality. The mixer’s “Main,” “Hall,” and “Rev FX” locations, among others, let you adjust each value appropriately using particular faders. Each position also offers the “Mute,” “Solo,” and “Pan” choices. Gate and Dynamics are the two modulators. Each can produce a distinctive approach to your instruments by either varying the output volume (“Gate”) or varying the instrument’s dynamics level (“Dynamics”) over time to produce rhythmic effects. To rapidly create fresh sounds and textures, adjust the “Rate,” “Steps,” and “Range” in each area.

Berlin symphonic strings is a sound designers’ feast. With Symphonic Destruction, it’s simpler than ever to create real cinematic sounds deserving of top productions with the fewest number of mouse clicks. Modern and novel soundscapes, ranging from quiet and meditative timbres to more explosive and overwhelming braams, are inspired by all tools, setups, and settings. In between, you can come up with a variety of fresh concepts that might work perfectly in your upcoming production or at the very least encourage you to think beyond the box. This is the Best Orchestral VST Plugin in 2022.

When Heavyocity set out to create NOVO, they had one mission in mind: “make strings new again.” It goes without saying that NOVO is a top-notch, extensively sampled orchestral strings instrument that was recorded at the renowned Eastwood Scoring Stage at Warner Bros Studios. However, that is the extent of its resemblance to other orchestral VIs. Beyond the nearly 40GB of fully configurable sound-designed string samples, NOVO gives composers unprecedented control over tweaking, processing, layering, and sequencing. It’s a new frontier in hybrid film, game, and television music to consider the potential of mixing excellent symphonic strings with Heavyocity’s distinctive sound design. Simply put, NOVO is the best string instrument ever created for film composer. It’s quite unlikely that there ever will be.

Although NOVO has a sizable library that sounds amazing “out-of-the-box,” the degree of control and sound modification offered by the interface is what actually gives NOVO its power. Introducing Heavyocity’s brand-new dynamic playback engine, CYCLE. CYCLE is the result of years of internal work and features a set of controllers that can instantly produce rhythmic pulses, swells, stutters, and glitch effects, as well as effective granular-style pads for ambient drones and textures. A sustained pad can be given a minor motion boost with CYCLE, or a sound can be turned entirely into glitchy mayhem. Up to eight patterns can be linked together to create lengthy, developing sequences. With CYCLE, the possibilities for sound design are practically endless; approach with care. 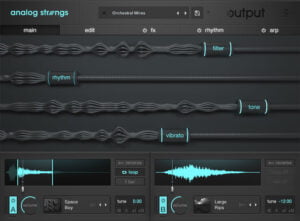 It is not a string instrument, Analog Strings. It is a string-based instrument that creates strange and original string-based sounds by dissecting its source using a collection of cleverly programmed effects and modulators. Basic issue with the majority of vintage string synthesizers is that they tend to stay close to the source. We all know how far Output’s instruments can travel beyond the source, despite not being the company’s first instrument for scoring stages. As a starting point, they in this instance use a variety of analog synthesizers, analog effects, delay effects, large and small orchestras, and classical string instruments. Adding a new evolving dynamic to the playing styles string sound, as well as a greater range of the audible spectrum in a variety of timbres, personalities, or even literary moving from really low pads to the delicate high ones, is what Analog Strings does. 500 presets that sound the way all those vintage string synthesizers should have always solo cello.

Similar to all other Output instruments, you won’t buy this to serve as yet another analog string emulator; rather, you’ll buy the classical guitar to give your compositions a little extra personality. On the one hand, Analog Strings has the classic Solina sound, but on the velocity layers, it still sounds very contemporary, like a true jewel of the twenty-first century, and is in no way dated. This, in my opinion, is one of the instrument’s strongest benefits. introducing some intriguing, modern-sounding analog strings that aren’t a throwback to the past.

The results of combining all those very commonplace sound sources, effects, and modulators are truly amazing. Symphony orchestra belongs to a distinct genre, Analog Strings has a unique tone. It is unquestionably a library that can provide your arrangement some unique colors. Having a single synthesizer or library with a distinctive sound helps you set your song apart from others’. I’m fortunate to have some of these instruments from Output. I came to the realization that I had a variety of virtual synthesizers, but I only use one or two of them because there isn’t much of a difference between them. I use all of the output libraries that I have at the same time. rather frequently.

With them—Analog Strings is also included in this category—you can begin with a somewhat dull, well-known, and countless times-used harmony, play it with a strange-sounding Analog Strings preset, and end up with a contemporary, up-to-date melody. Analog Strings is undoubtedly more than simply about strings; it extends beyond the confines of the conventional string cosmos. Captain, where are we going? someplace we haven’t yet visited. Play us a line on the analog strings, Doctor Spock.