String ensembles are sure to improve the sonic quality of your track, whether it is classical, pop, or a quiet section in a song. regardless of whether it is a quartet, a duo, or even a single instrument. These instruments sound wonderful when performed together and are frequently employed in contemporary performances for their sensitivity and warmth.

However, not everyone has access to these instruments or a studio where they are all assembled. In the past, you had to gather the players and record a certain song or score in real time. Fortunately, we live in a period when getting outstanding results doesn’t involve putting in as much effort, and these libraries are proof of that. Every developer took great care when recording and editing the samples to enable every producer, whether working in a sophisticated professional studio or a simple home studio, to present the greatest music possible.

The best string ensemble libraries that will be made available for Kontakt in 2022 are included on this list. You might also find some freeware options below.

An excellent choice for contemporary productions and film compositions that demand a genuine and organic tone. Following closely following the beautiful Brass Collection is the second release in Native Instruments’ Symphonic Series of orchestral instrument sample libraries, the String Ensemble. While it is traditional to use the same creative team, orchestra, and recording studio throughout a series, this is not the case in this instance.

This String Ensemble was recorded by Audiobro’s team, whilst Soundiron’s team assisted with the Brass Collection. And the good news is that Audiobro is also responsible for the highly respected LA Scoring Strings collection, one of the best string sample libraries ever made. You can therefore be sure that these string instruments are of incredible quality.

Legato is a key component of every orchestral sample library since it gives performances the requisite organic quality. When turned on, this option gives you the ability to adjust the transition behavior by varying the velocity, with portamento appearing at lesser speeds as well. A slider lets you manage the value at which the portamento is engaged, albeit it can be challenging to do this. To enable “True Divisi” capability, each section’s “A” and “B” parts were separately recorded. When playing polyphonic lines, chords, or phrases, the “Auto Divisi” engine, which is activated by default, maintains the player sizer constant, adding authenticity to the performance as a whole.

String Ensemble includes a few more tools that might help you fully utilize the plugin. There is a separate mixer section that has an EQ, reverb, and compression. In addition to the effects, you can move the microphone closer, farther, or in the middle of the instrument to create new sounds.

String Ensemble is a one of the best vst strings library that provides excellent on-the-fly modifications. It’s undeniably a well-defined piece of music production software for film scores, even though the sonority isn’t substantially different from other libraries and maintains a consistently high level of sound quality. In combination with the built-in effects, the “Dynamics” control, which allows for exact dynamics modification, can produce a distinctive mood and sonority. This is the library to choose if you want a great-sounding one with simple controls. This is the Best Kontakt String Library in 2022.

Consider using a Stradivarius instrument in your upcoming play. It is now feasible thanks to Native Instruments and their Cremona Quartet sample library. The name comes from the Italian city of Cremona, whose surrounding woods served as the foundation for the construction of numerous legendary instruments. They have a lot of individuality and character as a result, which are unique traits that only an instrument from the 1600s could offer.

Other libraries, such Session Strings Pro 2, may have a much greater variety of instruments symphony orchestra, but Cremona Quartet outshines them all by offering a one-of-a-kind collection of the finest violins, violas, and cellos you could ever want to hear, right at your DAW. It’s astounding to think that all of these tools are available for your artistic use despite some of them having values that are far beyond what the common person could purchase.

Cremona is home to a very well-chosen quartet and four excellent instruments, including an Amati viola from 1614, the oldest instrument in the city, as well as the “Vesuvius” violin by Stradivari and the “Prince Doria” violin by Guarneri, both produced around 1734. Every note sampled for Cremona was meticulously captured utilizing several dynamics and microphone placements, ensuring that there are no phasing problems during legato transitions from pianissimo to fortissimo. This produces a performance that is vividly organic and offers you what a real player would.

You may rapidly mimic the fingerboard position that a professional player of analog strings would select during a live concert using the “Smart” position algorithm. You can choose exactly how you want the string section to sound by switching between the “Low String” and “High String” choices. The upper position produces a crisper and brighter sonority, while the lower level will sound more mellow. In essence, you have a pretty excellent vibrato effect that was recorded from the player’s hand and afterwards reapply on the sample itself with the correct parameters. The best and most fluid effect is produced as a result, and you can automate and regulate it in real-time while doing so.

The best strings vst libraries you could possibly conceive is what Native Instruments has to offer, in addition to their consistently excellent work. Sure, great audio quality and accurate articulations are ultimately what counts, but the symphonic strings included in this set truly surpass all expectations. Why not include Stradivari, Amati, and Guarneri in your upcoming production? They are well-known for their amazing luthier work. The recording process was excellent, and the sound quality is outstanding. The articulations are good and ought to work well in most productions. This is the Best String Kontakt Library in 2022. 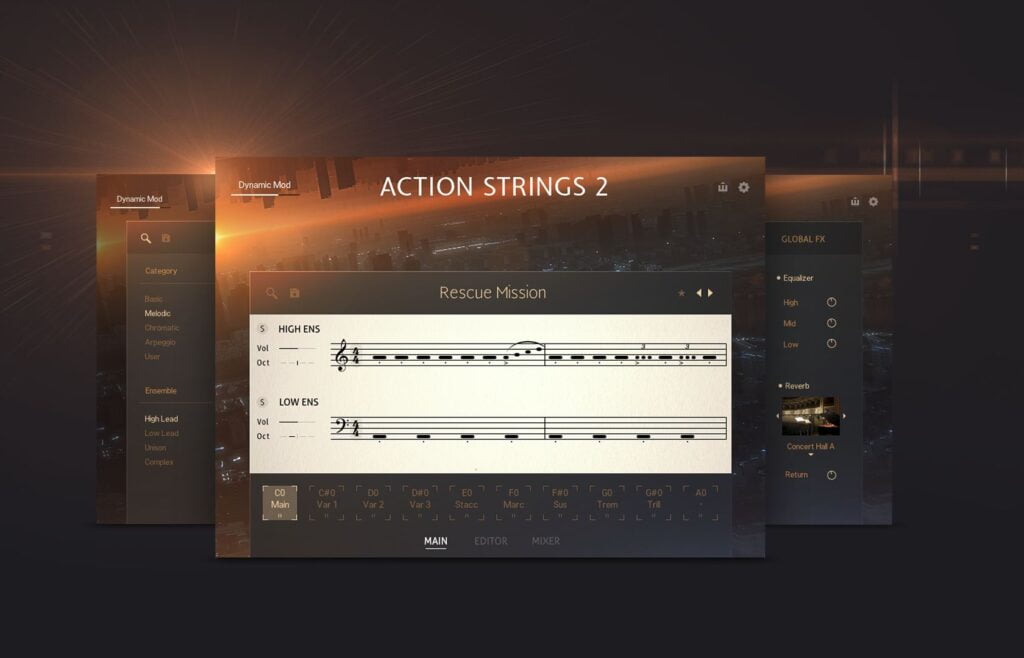 A cinematic sample library that produces orchestrated musical recordings, Action Strings 2 is the successor to the well-known Action Strings. There are 125 live-recorded expressive modules in it, along with 11 single articulations like staccato, tremolo, and sustain. With this extensive 41-piece ensemble, you get the incredible realism of a live performance and limitless creative ability to construct your own original musical phrases or freely play any.

This innovative string orchestra enables a smooth and novel method of notating musical phrases and melodies. The musical length is presented horizontally, much like any MIDI note editor, while the note’s vertical location is displayed exactly like it would be on a real staff. This is a creative technique to improve your ability to envision what you’ve just written without sacrificing the readability of conventional notation because breaks and articulations are indicated by their own symbols.

You can tweak everything exactly how you want to with the use of a mixer tool. The ability to precisely blend each microphone, combine signals, and add our favorite effects is made possible by swiping the faders. Additionally, Kontakt strings libraries allows you to route to other outputs. Additionally, it has a “Global FX” section that enables you to apply EQ to the main output and choose between various forms of reverb, as well as a “Ensemble Selector” that allows you to switch between “High” and “Low” ensembles (and even solo one of them).

Action Strings 2 delivers extremely decent software with a very attractive “Editor” interface that should be quite accommodating to lengthy hours working on a specific piece. Having tools like a phrase notation editor on the same screen and being able to convert them to MIDI and beyond is beneficial. Each note’s duration, length, or pitch can be swiftly and with commensurate sound quality shaped, altered, tweaked, and modified. When Heavyocity set out to create NOVO, they had one mission in mind: “make strings new again.” It goes without saying that NOVO is a top-notch, extensively sampled orchestral strings instrument that was recorded at the renowned Eastwood Scoring Stage at Warner Bros. Studios. However, that is the extent of its resemblance to other orchestral VIs. Beyond the nearly 40GB of fully configurable sound-designed string samples, NOVO gives composers unprecedented control over tweaking, processing, layering, and sequencing. It’s a new frontier in hybrid film, game, and television music to consider the potential of mixing excellent symphonic strings with Heavyocity’s distinctive sound design. Simply put, NOVO is the best string instrument ever created for film. And in all likelihood, there probably never will be.