In most live and studio situations, having a powerful kick drum sound is essential. Kick drum microphones are crucial pieces of recording equipment that give your bass drum sound vitality and add all the necessary low-end to a drum kit mix. You will be able to hear it when the band plays when you perform live and your kick has a microphone. In order to hear your kick drum better in the mix, you can monitor it in live and studio situations.

It’s not the easiest task to mike up a drum. A bass drum needs to be mic’d differently. There are just so many factors to take into account. It becomes practically impossible to select a microphone that will work for every situation. It’s difficult to find the best kick drum microphone.

It is believed that miking a drum compromises the authentic acoustic sound it produces. Most of the time, though, there is no other option, thus it is made to be heard from a respectable distance. The mid-range frequencies, or the sound of the drums attacking, will be amplified by placing a microphone in front of or inside the drum. Additionally, as long as the microphone picks up the missing sound, it is generally possible to EQ it in.

The kick or bass drum, as well as typically the entire mix, has the lowest frequencies of the entire drum set. Additionally, it makes the loudest sound. Depending on its size, tune, and whether it has any internal cushioning, it might vary greatly. Jazz kicks, on the other hand, are often smaller and have a crisper sound; most rock drummers utilize a 22 inch. There are therefore many variables. But in order to cover as many as possible, we must search for the best microphone. 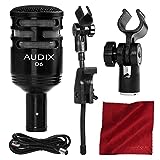 Industry-leading kick drum microphones include the Audix D6. Many sound professionals assert that this microphone is their go-to tool for capturing the powerful bass drum sound.

This kick drum mic’s VLM (very low mass) diaphragm, which has great transient response and can withstand high SPLs of 144dB without distortion, allows it to create clear, earth-shaking bottom end. In live situations, this specific microphone does increase higher band frequencies between 4-5 kHz and 10-12 kHz, allowing the kick drum to break through a wall of sound.

This microphone has a devoted following of supporters who vouch for it as the best kick drum mic ever despite the fact that these frequency increases may not be to everyone’s taste. For meticulous quality control, each Audix D6 kick drum microphone is designed, machined, built, and tested in the USA. It fits neatly and is simple to install inside a kick drum aperture thanks to the lightweight aluminum body.

When a live venue uses the excellent Audix D6 kick drum microphone, you can be sure that the kick drum response will be precise, crystal-clear, and powerful. This is the best Kick Drum Mic in 2023. 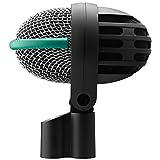 This AKG kick drum mic is a renowned drum microphone. Because of its outstanding performance and dependability, it has become the industry standard for kick drums.

The AKG D112 is a large-diaphragm dynamic microphone that can tolerate sound pressure levels of up to 160dB without introducing distortion. Anything you can throw at this microphone will not damage it. For all of my live and studio recordings, I always use the AKG D112 Kick drum mic, and it never fails. The unit’s build is rock sturdy, and it routinely manages to catch amazing sounds.

The diaphragm’s extraordinarily low resonance frequency, which enables it to catch frequencies below 100 Hz, is what permits it to produce such an authoritative bottom end. A powerful and accurate kick drum sound is captured and transmitted by this kick drum mic. The nearly silent inbuilt hum-compensation coil contributes to the excellent sound quality that is offered. Having been used on stages all around the world for more than 30 years, this product is the standard for quality in the business. This is the best Kick Drum Microphone in 2023. 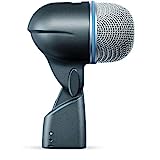 Next up for examination is the Shure Beta 52A, another venerable kick drum microphone. It has a recognizable rounded diaphragm that is designed especially for use with bass drums. This microphone has a super-cardioid polar pattern for the best drum sound catching and optimum noise isolation. Additionally, it manages SPL levels as high as 174 without distorting to guarantee a clean performance at large volumes.

Numerous high-quality features, such as an innovative pneumatic shock mount system that reduces mechanical noise and vibration transmission, are present in the Shure Beta 52A. This bass drum microphone is constructed like a tank, and it can take a beating while still producing a punchy, studio-quality performance even at loud sound pressure levels.

Shure, a renowned global provider of microphones for live and studio use, has a terrific offering with this kick drum microphone. The Shure Beta 52A lives up to their stellar reputation for producing top-notch goods. 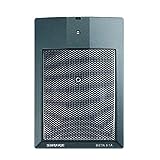 The Shure Beta 91A stands out sharply from the majority of kick drum microphones, including every single one on our list. However, a lot of people contend that this is the greatest kick drum mic ever created. It is a very low-profile design that uses an integrated preamplifier, giving it a distinctive appearance. It rests inside the bass drum rather than being affixed, and thanks to its consistent half-cardioid polar pattern, it picks up sound inside the drum’s shell.

Condenser microphones, integrated preamps, and two-position contour switches all contribute to the Shure Beta 91A’s distinctive sound, making it one of a kind. This kick drum mic’s frequency response has been specially adapted by Shure to fit a live musical application. It can handle SPLs of 155dB without distorting and has a broad dynamic range.

This bass drum mic also has a two-position switch, which you can use to choose between a flat response and a low-mid scoop option that provides more attack. It performs incredibly well live, especially with the low-mid scoop setting, which has a lot of clarity and attack and particularly well cuts through a live wall of sound.

With the e602 mic, Sennheiser has undoubtedly produced a high-quality kick drum microphone. It can precisely capture kick drum sounds thanks to its remarkable frequency response of 20Hz to 16kHz. This bass drum mic has an aluminum body that is durable and lightweight, along with a large-diaphragm capsule that improves bass response. Without distortion, this microphone can handle SPLs of more than 155dB.

The Sennheiser e602 II delivers excellent performance and features a feature called frequency-independent directivity that is quite uncommon. This indicates that regardless of placement, the microphone can deliver a consistent frequency response.