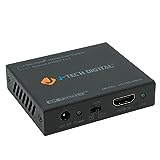 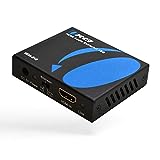 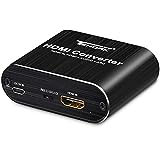 The J-Tech Digital 4K 60 Hz HDMI Audio Extractor is a wonderful option if you want an HDMI audio extractor that supports the highest video resolution of 4K at 60 Hz. To begin, you can extract HDMI signal from HDMI input and convert it to multichannel audio (SPDIF) or 2-channel analog stereo audio output using this HDMI audio extractor.

The HDMI audio extractor is simple to install and operate. You can use three alternative audio EDID settings with the plug-and-play functionality: 2-channel (2CH) for two channels L/R audio, TV audio output, and 5-channel (5CH) for digital audio formats like Dolby Digital, DTS, and LPCM. You may also learn how to use the HDMI audio extractor by reading the full user manual that comes with it. Three EDID settings are available on this J-Tech Digital audio extractor-converter. A dual-channel left-right stereo out, (3.5mm) 5.1 channel Surround Sound, and EDID to TV are among the three possibilities.

However, before connecting your devices, make sure your HDMI signal cable is rated for 2.0 for the optimum sound quality from this audio extractor. Otherwise, the audio output may be slightly distorted and fall short. Fortunately, this is readily fixed by purchasing a higher-quality HDMI cable with gold or copper connections. Make sure you buy it individually to guarantee you get the best cable available. This HDMI audio extractor works well with surround sound speakers, soundbars, and headphones with stereo output.

One of the most significant advantages discovered was that the 5.1 channel did not affect the 4k resolution and 60Hz output. Other low-cost audio extractors may struggle with adequate bandwidth allocation and splitting, but J-Tech Digital hdmi audio converters seemed to be unaffected and caused no audio delays.

This hdmi audio converter device only allows one HDMI input in terms of hardware connectivity. This device can extract and convert audio from a single HDMI input source into two different formats: optical output (for SPDIF audio) and 3.5mm stereo output. This is the best hdmi audio extractor in 2023.

It can be tough to find an extractor that works well with HDMI input devices like gaming consoles. Regardless, the OREI HDA-925 audio converter-extractor is a fantastic pick. It produces extraordinarily clear and dynamic sound from Xbox, Playstation, and other HDMI input devices with complete ARC capability.

The only drawback is that it does not appear to be compatible with soundbars that have an ARC (Audio Return Channel) connector. If the ARC HDMI output port on this extractor doesn’t work with audio output devices like these, you can try the dedicated audio output HDMI port or the optical output port. If you’re in a pinch, you can also use the 3.5mm port. (In which case, you’ll only be able to get a stereo output). When it comes to ports and compatibility, you’ve probably noticed that your devices have four separate audio outputs. (With the majority of them being digital audio outputs) Unfortunately, the same cannot be true for input devices, as this audio extractor-converter only has one HDMI input.

OREI is also concerned with providing the best possible audio experience in their extractors. This is obvious because even when the audio stream is sent through many outlets, there is no noticeable delay. Audio lag has been reported by Roku device users while utilizing ARC on large-screen screens. On the other hand, the output hub and 3.5mm jack from OREI help eliminate this completely.

If you’re new to audio extractors, keep in mind that the hdmi device is not only a very versatile and powerful HDMI audio extractor with ARC support, but it’s also incredibly user-friendly and straightforward to set up. The user manual is easy to read and understand, and the HDMI audio extractor itself has a simple interface. (Controls are on the front, while I/O is on the back). This is the best hdmi audio extractors in 2023.

For PlayStation users, the Tendak 4K HDMI to HDMI Audio Splitter and Optical Toslink SPDIF + 3.5mm Stereo HDMI ARC Adapter Converter Support could be an excellent investment. Because of its interoperability with a variety of devices, it is currently one of the most extensively used HDMI audio extractors on the market.

One HDMI input to one HDMI output, a 3.5 mm audio output, and an optical output are all included in the TENDAK HDMI Audio Extractor. As a result, audio from an HDMI input source may be readily extracted and sent to your speaker or soundbar. There are three EDID audio settings included with this HDMI audio extractor: 2.1CH, 5.1CH, and Pass model. 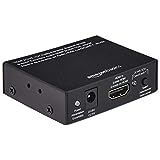 While AmazonBasics is a relative newcomer to the field of HDMI audio extractors, the quality of this gadget is not in the least bit poor. This durable audio converter-extractor has a heavy-duty metal body and kink-free, exceptionally flexible HDMI cables. The polished copper on each connector ensures optimal connectivity and compatibility with a wide range of HDMI input and audio output devices. (Speaking of HDMI input devices, this can only support one.)

Because this HDMI audio extractor-converter device can supply dual-channel stereo as well as 5.1 surround audio, you may expect incredibly high-quality returns on your audio stream while using it. It’s ideal for pairing with specialist audio output devices like soundbars or amplifiers to create a cinematic experience in your own home. This is the best hdmi audio extractors under $100 in 2023. 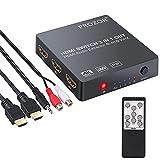 This is the ideal alternative for you if you’re not sold on the notion of employing an HDMI audio extractor or simply don’t want to spend a lot of money on something you might not use to its full potential. This audio extractor was designed by Prostor to be not only incredibly economical, but also very adaptable and usable.

It’s a converter and switcher in addition to an HDMI audio extractor. It comes with an IR remote, gold-plated HDMI cable, high-quality USB cable, and TV connections as part of the accessories package. You’ll also find that this low-cost device has three HDMI inputs and various outputs, allowing you to connect it to a range of devices.

Unfortunately, while other audio extractors may support HDMI 2.0, this audio extractor’s HDMI inputs can only handle HDMI 1.4. As a result, the 4k resolution is available at 30Hz rather than 60Hz. It does, however, give the option of seeing the 3D video as well. Dual-channel left-right, 5.1 Dolby surround, and Toslink are the three conventional sound options. (Through the use of an optical cable). You won’t notice any audio delays thanks to a latency-free transfer rate of up to 10Gbps, regardless of the HDMI input devices you use.