Before you spend your hard-earned cash on dedicated glitch-ware, have a look at the VST plugins you currently have. The artist’s imagination is the sole limit to how they can explore the aesthetics of error. While plugin presets have their place, it’s important to remember that the plugin controls you, not the other way around.

One of the most appealing aspects of digital instruments is that they cannot be physically damaged by misuse. So go ahead and defy the rules to see what happens. Also, if there’s a random button, press it! We’ve selected the three best glitch VST plugins available in one article. And believe us when we say that if you have one of these three in your arsenal, you won’t need anything else. 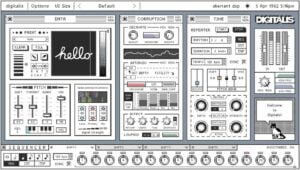 Aberrant DPS’s Digitalis is an audio deterioration plugin. To degrade the incoming signal, it performs a variety of processing activities. Due to its three processing modules dedicated to distorting and destroying the incoming signal, Digitalis is an excellent effect for creating glitches. It can do bit-crushing, formant filtering, pitch-shifting, and filtering, among other things. The plugin’s graphical interface, which looks like an old-school Mac computer, and the retro sound it produces are both reminiscent of the 1990s. Furthermore, it takes a digital approach to sampling rate deterioration. This is refreshing, as most similar plugins attempt to mimic analog sounds and outcomes.

Digitalis contains three separate processing modules that degrade your sounds in different ways in this VST Plugin. Data, corruption, and time are the modules. They can all be easily enabled or disabled, and they can all run at the same time. The data module resembles an old-fashioned drawing app in which the user can draw with a pencil. Setting up the spectrum filter is what you’re truly doing. You can use the pre-loaded images and patterns, but you can also design your own to create unique spectral filtering patterns. In addition, the data module has formant and pitch processors, resulting in pleasing artifacts that color the sound. Telecommunications is the last portion of the data module, and it replicates low-bandwidth data compression effects on incoming audio; it basically sounds like internet audio from the 1990s.

The audio’s bits and bytes are changed by the corruption module. It incorporates a decimator, which increases the length of each digital byte, lowering the sound’s sampling rate. You can use a crossover control to tame the high end and demolish the low end much more harshly. This module also includes a bit-crusher that can go as low as one bit per sample. The bit-crusher and decimator can accomplish self-oscillation if properly configured. A repeater is at the heart of the time module. It builds new segments by repeating the brief samples from the input signal. The samples’ duration and the rhythm of the repetitions can be specified in milliseconds, beats, or notes. Finally, the software includes a step sequencer that can be used to control one of Digitalis’ effects.

The graphical interface is simple to use and enjoyable to work with. It is based on Mac computers from the 1990s, giving it a familiar and clear appearance. You also get Jon, a cat that will occasionally give knowledge on the plugin’s functions. As a result, the plugin’s learning curve is substantially lower, making it ideal for beginners.

Digitalis is a fantastic audio decompression plugin. It can accomplish a reduced sample rate in a variety of methods and gives you unrivaled control over the distortion’s character. The three modules produce diverse sonic effects, and the interface is simple and enjoyable to use, making it an excellent addition to your glitch arsenal. This is the Best Glitch Plugin in 2022. Cableguys’ Timeshaper 2 is a glitching effect processor. It can do a variety of glitchy sound effects, such as reversing, stuttering, tape-stopping, scratching, and more.

Timeshaper is a time-based modulation plugin that may be used to generate a variety of effects, including adding unpredictability to your sound and creating Glitch-like sounds. To produce these effects, Timeshaper adjusts the location of an imagined ‘playhead’ applied to the incoming signal.

A low-frequency oscillator is at the heart of Timeshaper 2. It has a range of 1/28 to 32 bars and can be locked to the host’s tempo. Additionally, the user has the option of running the oscillator in Hertz, with a range of 20Hz to 5.24kHz. These frequencies can produce hallucinogenic effects and unusual noises.

The curve editor is the main window. The user can draw the amount of time offset in this box. The concept is that the lines you draw will control which part of the incoming signal will be repeated over which beat like in Psytrance. If you lay down a simple drum pattern with only snares and hi-hats, you’ll immediately grasp how this works. Finally, the step mode is excellent for stutters and repeated effects. When you use the curve editor to add lines and curves, things become more unpredictable and intriguing. You can achieve pitch speeding or slowing, scratch effects, and tape-stop effects this way.

Within a single instance of Timeshaper 2, you can run up to three frequency bands. Each band may essentially run its own LFO pattern, and the band editor window’s crossover settings let you define up to three frequency bands. As a result, each band can run Timeshaper as its own instance, opening up a whole new universe of aural possibilities. This is the Best Glitch VST in 2022. 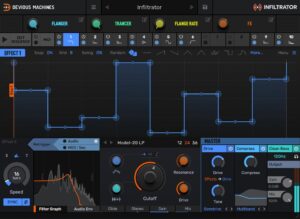 Devious Machines’ Infiltrator is a creative multi-effect sequencer. By layering and sequencing effects, it aims to add interest to your sequences while sparing fresh ideas.

In electronic music, the concept of sequencing effect patterns is not new. If you want to add excitement to your productions and stand out as a producer, here is how you should move and operate inside your arrangements. Infiltrator has 28 different effects to pick from, and the sequence in which you organize and set them up will let you create your own sound. They can make some interesting glitch sounds.

Infiltrator comes with 28 different effects. Pitch-shifting, FM, delay, reverb, looper, repeater, distortion, and a variety of modeled filters are among them. The filter selection is particularly impressive, with comb filters, Model-20, Ladder, and 101 type filters among the options. In your chain, you can have up to 10 effects running at once, with several instances of the same effect running on different settings. Each effect has its own interface with enough controls to allow for a wide range of sound production possibilities.

Infiltrator’s workflow revolves around the sequencer. It has 32 steps and has the capacity to hold up to ten effects. After you’ve decided on an effect, you can start deciding when it will appear in the sequence. A curve editor is also included, which allows you to visually design your effects by creating curves. You can also use a randomized pattern or a Euclidean rhythm to generate fresh ideas. The sequencer can be synchronized with your host DAW or operated independently. There’s also a swing control to give your sequences more energy, as well as a pitch snapping tool to keep you in tune while dealing with pitch-shifter effects.

Infiltrator is easily adaptable to use as a live performance tool. You can use MIDI notes to activate or disable effects, and it supports MIDI. MIDI can also be used to trigger envelopes and curves. Finally, master effects are included in Infiltrator, which give polish and consistency to your overall sound. A compressor is incorporated to prevent volume peaks or dips caused by the use of ten distinct effects. There’s also a Maximizer to boost the volume and fullness of your sounds, as well as a multiband compressor for even more flexibility. The overdrive can be used before or after the sequencer effects to give grit and bite to your sounds.

When it comes to creating glitches and stutters, Infiltrator is a fantastic tool to have. Chord progressions, melodies, and even percussion sequences can all benefit from it. The effects are of excellent quality, and the interface is attractive and simple to use. It’s a multi-effects beast of a plugin, so there’s not much to critique!

The shaperbox 2 is Highly configurable tempo-synced envelopes drive this delightfully designed package of effects, which can be accessed via an extremely intuitive and appealing interface. There are a plethora of tools available for drawing and creating an endless number of envelope shapes. You may add curves, reverse forms, copy and paste, randomize, duplicate, and modify the time length quickly, among other things. Every conceivable means of generating and/or changing an envelope appears to have been researched and implemented, in my opinion. Fantastic!

As a result, an envelope is nothing more than a visual shape that creates and displays data in a user-defined amount of time. They can be repeated or one-shot, and in some circumstances, a piece of the shape can be looped. Envelopes are frequently conceived of as modulation sources for synthesis parameters (e.g. amplitude, cut-off frequency, pitch, etc.). And, more often than not, the ADSR or some extended versions are discovered. Cableguys has a level of depth and intricacy in envelope production and editing that you won’t find anywhere else. Time (stutter and temporal effects), Crush (distortion module and saturation), Filter, Pan, Volume, and Width are just a few of the processors that have used these concepts. Within the ShaperBox plugin, you can create a custom effects chain. All processors have the same graphics display, which includes a time-domain visual based on beat division or bar and a superimposed waveform that refreshes in realtime.

These are very usable and simple-to-implement plugins that can do everything from glitchy extremes to nuanced parametric modulation in a tempo-synchronized environment with a sturdy and elegant GUI. I use a lot of plugins, and I’m not sure how I missed the Cableguys, considering they’ve been around since 2007. These are unquestionably essential plugs for any producer, regardless of genre.