Using a control surface with Logic Pro X can help you boost your productivity and creativity. These are a fantastic method to interact with and manage the functionality of your DAW in a way that feels a lot like utilizing analog gear and electronic instruments. Logic Pro X comes with a ton of great features and pre-installed plug-ins. With so much to choose from, it might be tough to decide which control surface is best for you. So, here’s a list of seven of the best Logic Pro control surfaces to consider.

MCU claims to give users an organic sensation of faders and knobs at their fingertips without sacrificing the current audio manipulation experience. It has the appearance and feel of a real analog mixing board. It is, however, far heavier and bulkier than any of the other possibilities. The user has a lot of freedom with MCU when it comes to collecting audio because it has so many possibilities.

It contains 9 motorized faders as well as almost all of the conventional controls and shortcuts you’d expect from daw control surfaces. MCU also has its own communication protocol called Mackie. If you require more faders, you can add one or more Mackie Control Extender Pros for an extra eight tracks. This build quality upgrade transforms it into a full-featured control surface that works seamlessly with Logic Pro and other DAWs.

Mackie MCU Pro, sometimes known as Mackie Control Universal Pro, is one of the best Logic Pro X control surfaces on the market. However, if you want to buy this incredible gear for your digital audio workstation, you will have to spend a significant sum of money. There are low-cost digital mixers on the market, but they have significant drawbacks such as non-motorized faders and a lack of a display panel. If you want one with the above characteristics, you’ll have to spend at least twice as much as the Mackie MCU Pro. The Mackie MCU Pro has one great feature that I particularly like: it can be expanded with Mackie’s Extender Pro and C4 add-on devices. This is the Best Control Surface for Logic Pro X in 2023.

Its incredibly user-friendly and streamlined layout, the Korg nanoKONTROL2 is quite popular among musicians and mixers. In comparison to other high-priced models on the market, it is also relatively reasonable.

The wireless unit crams eight faders into a teeny-tiny package. Its compact size allows it to be placed directly in front of the user’s laptop or computer without taking up too much space on their desk. Some functionalities, such as transport control, are uncommon, which is why we chose Korg nanoKONTROL2 in the first place. The transport panel has buttons for play, record, fast forward, and rewind. Each of the eight channels is easily accessible thanks to the switches. You may use the knobs to get appropriate stereo balance in your tracks. All main DAWs for Windows and Mac are compatible with the Korg nanoKONTROL2. This is the Best Logic Pro X Control Surface in 2023.

PreSonus’ FaderPort 8 is one of the most powerful control surfaces on the market, with a wealth of functions. Due to the daw control surface compact size, no other device can compete with this controller in any studio. With the FaderPort 8 control surface, you’ll be able to mix and manipulate your DAW (or Logic Pro software) in a fraction of the time.

This teeny-tiny powerhouse will astound you at every turn during your recording and mixing session. The Presonus Fader Port is an excellent compromise between a low price and a powerful control surface. With only one fader, it’s a nice start for a home studio, but it’s limited. It is available for a fraction of the cost of other common control surfaces. This little device, measuring 5.5′′x9′′, is ideal for replacing your computer mouse.

It has eight 100mm motorized, touch-sensitive faders that precisely follow automation. PreSonus FaderPort 8 will assist you in creating the optimal combination of results if your home studio is loaded with a lot of gear and you’re interested in every musical detail. Session navigators can manage difficult sessions with FaderPort’s speedier workflow and specific transport controls. It’s also impressive that you can edit standard plug-in settings from your control panel. As a result, PreSonus Fader Port is exceptionally easy to use. 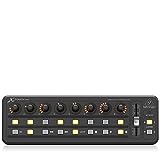 The X-Touch Mini USB controller is lightweight and ultra-compact, and it supports Mackie Control and MIDI protocols. There are eight rotary controls with LED collars that may be used as buttons or knobs, 16 illuminated buttons, and a single high-quality 60mm slider. You can effortlessly and efficiently manipulate your mix, plug-ins, and virtual synths with them. Furthermore, users can quickly access two fully separate layers, each with 25 control components.

It works with virtually any DAW, including Logic Pro. The X-Touch Mini can also be used to control instruments and lightrooms. To get started, simply place your laptop on your desk (or in a vehicle seat) and connect in the USB controller, which also serves as a power source. To be honest, no other controller performs as well as the Behringer X-Touch Mini! 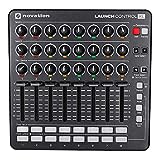 Novation Launchpad is the control surface for you if you’re looking for something you can use in your home studio as well as outside recording. Although it has limited functionality, it is an excellent value for money device that costs less than $200. It would be ideal for low-cost home studios.

It was designed for Ableton Live, but midi controllers also works with Logic Pro X and Pro Tools. This little control surface can control all of your DAW’s mixer’s capabilities. Let’s take a closer look at Novation’s launch control. The Novation Launchpad features eight non-motorized 60mm faders. These faders are great for mixing, but they’re useless for automation because they don’t have motors. You’ll need to rely on your mouse and keyboard if you want to add some automation to your tracks. 60mm faders, on the other hand, are ideal for volume balancing.