Instrument libraries are one of the most useful resources available to today’s music production. Even if you don’t have the ample guitar equipment to record or play such instruments, these guitar sounds sample library can contain a large number of samples and dynamic variations that will quickly make you sound like a real musician guitar tones. Acoustic instruments are significantly more difficult to work with because of their distinct sound characteristics. Microphones are essential in this procedure for modeling technology, so if you can’t find a good approach to capture their essence, a sound library will come in handy.

Vir2 Acou6tics is a versatile, flawless-sounding wonder that meticulously preserves the soul of six acoustic instruments. It includes a guitalele, steel-string guitar, twelve-string, nylon-string, ukulele, and mandolin, among other instruments.

It includes plectrum and fingerpicking, as well as Blumlein stereo recordings and a piezo pickup viewpoint. For each instrument, tens of thousands of samples were recorded spanning more than a dozen articulations, including sustains, mutes, releases, legatos, hammer-ons and pull-offs, slides, harmonics, and effects. Virtual room control with adjustable mic distance and sympathetic resonance are also included in Acou6tics.

The industry-leading Kontakt engine powers Acou6tics. It’s compatible with VST, RTAS (Pro Tools 9 & 10) and AAX (Pro Tools 10 & 11) plug-in formats, thus it can be used in any major sequencer as well as standalone. This is the Best Classical Guitar Plugin in 2022.

The smoothness and delicacy of a nylon-stringed guitar are present here, emphasizing clear and vibrant sounds in any style. Virtual Guitarist SILK by UJAM is a Kontakt library that aims to make it simple to compose classical guitar recordings and fingerpick melodies using a variety of styles, motifs, and arpeggios. In the same library, you’ll find delicate arrangements and vibrant fortissimo passages, demonstrating its diversity and versatility.

SILK combines a great sound quality sought by all with an attractive design that will save learners time and aggravation by allowing good ideas to flow freely without prior guitar knowledge. The integrated amp modeling can help you achieve a good vintage amp sound, and standard effects like delay and reverb will polish the strumming patterns.

When deciding between similar libraries, a vintage guitar will always bring the perfect sound to the table. According to UJAM, the team decided to capture this library using the best feasible method. They used an unidentified 1967 German classical concert guitar built by a renowned luthier and played by the best session musicians they could find.

One of the most common issues with plugin libraries is that they can sound robotic and unnatural at times. SILK’s 670 phrases (distributed across 60 group-styles), sophisticated mic setups and channel strip combinations in the “Character” control, a “Animate” algorithm that adds depth and movement to the signal, and controls for “Swing,” “Timing,” “Feel,” and “Variance” that can increase timing precision and overall dynamics to meet your song’s style can all help.

SILK is compatible with Native Instruments’ NKS, allowing you to use your Komplete Kontrol Keyboard or Maschine fast. The nylon strings library will be mapped appropriately right out of the box, allowing you to use Virtual Guitarist with the Light Guide, Smart Play features, and all of Komplete Kontrol’s possibilities without having to spend a lot of time customizing it.

This is a wonderful acoustic guitar plugin if you don’t know how to play the guitar or don’t have a lot of time to customize a Kontakt library. This library was produced by UJAM so that you may concentrate on making music rather than spending hours attempting to achieve a great classical guitar sound. Virtual Guitarist SILK is a wonderful collection with good-quality samples and effects like vibrato sound, with relatively common parameters that might help it become as organic as possible like legato slide. Although most people will be content with this information, others may find it strange and suspicious that they choose not to publish the brand or even the luthier’s name, as this data might provide more weight to the name. Nonetheless, for your production, it’s a smooth and great-sounding option to measure audience engagement. This is the Best Classical Guitar VST Plugins in 2022. 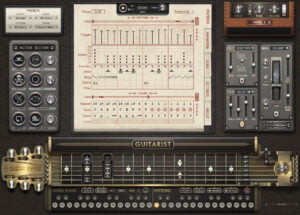 The Patterns page, which is located in the center, is actually quite simple to use. You can tell if a chord is activated, which strings are played, and whether the strum goes up or down in 16 steps. Each string can be played independently at any time, allowing for massive arpeggios and intricate metal riffs. It’s funky and vibrant thanks to the damp- and deadnotes.

Fender’s Stratocaster and Telecaster, as well as a Duesenberg Starplayer Special, are among the guitars offered. There are two versions of the Starplayer: “Bright” and “Normal.” 2,000 samples were used to record each of these lovely six-strings. A large number of fretted notes and open strings were captured, each of which was repeated numerous times. The round-robin function allows you to rotate between different samples. In Random mode, a sample for the triggered note is chosen at random from the available pool.