Nobody learns Pro Tools in a casual manner. Rarely, if ever, is it a person’s first DAW (that would be Garageband or FL or maybe Ableton). Pro Tools is designed for studios, and this is evident in how unfriendly the UI/UX is in general.

You also require hardware of higher caliber. When it comes to compatibility, Pro Tools is fairly harsh. While almost any audio interface may be plugged into Ableton and used, if it doesn’t specifically support Pro Tools, you won’t likely get fantastic performance. Again, this is a result of Pro Tools’ studio-based history. For those using Pro Tools, an inexpensive entry-level M-Audio interface might be adequate, but the latency and fidelity would be too poor for studio use.

This premium audio interface, which has an MSRP of over $5,000 for the 1616 model, was developed by Apogee over a thirty-year period. It has near-zero latency, the most sophisticated AD/DA conversion available from Apogee, and a flexible, modular I/O architecture that supports up to 32 inputs and outputs. Additionally, a simple touchscreen interface is available. You’ll find this cutting-edge audio interface in studios used by professionals all over the world. This is the Best Audio Interface for Pro Tools in 2023. 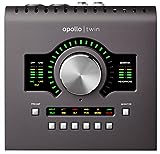 Despite its high price, the Apollo Twin from Universal Audio is one of the most popular audio interfaces for small studios. This is due to the Apollo’s excellent preamps, analog design, and high-quality parts. The outstanding Universal Audio Apollo Twin MKII Duo is the first product in this roundup. Numerous practical features are included, such as Unison preamps and total access to the UAD repertoire. These and other characteristics guarantee that you get the highest sound quality possible for a compact studio.

It is made by the Universal Audio company, which is well known for its ability to mix hardware and software to deliver some of the best performance imaginable. This specific example demonstrates how proficient Universal Audio has become in this area. It is the smallest and least powerful product in the Apollo range and the entry-level model, yet it is still superior to other goods in this class. It has two inputs, which makes it a fantastic choice for any aspiring desktop musician.

There are numerous ways in which this model differs from other audio interfaces. This device includes a DSP processor in addition to the standard form and appearance of a normal audio interface. You can utilize the Universal Audio Apollo Twin MKII Duo as an external DSP processing system in addition to being able to record through the interface. This has the benefit of making your computer work less. The model’s use of Unison technology is another noteworthy aspect. The Universal Audio Apollo Twin MKII Duo’s performance and adaptability are significantly enhanced by this technology. A huge variety of plug-ins, amps, and other things can be enabled.

Despite the lack of dedicated switches, the Universal Audio Apollo Twin MKII Duo has sufficient control on the panel. First, there is a sizable knob for pre-amp gain control, monitoring levels, and other functions. The availability of controls like your DIM, Mute, and similar features is another noteworthy aspect.

One of the most crucial features of the Universal Audio Apollo Twin MKII Duo is console operation, which is effectively supported by the device. If you are an experienced user, you will love this function. The console operation, on the other hand, could be a little challenging at first if you’re just getting started. But once you master it, you’ll undoubtedly relish using it.

Overall, everyone should choose the Universal Audio Apollo Twin MKII Duo because it is a great selection. It is a high-end product that provides outstanding audio quality no matter the studio environment. The Apollo Duo is the ideal audio interface for Pro Tools for small studios if you don’t want a lot of I/O choices. This is the Best Audio Interface for Avid Pro Tools in 2023. 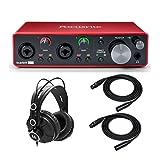 You’ll probably love using the Focusrite Scarlett 2i2 if you thought the Apollo mentioned above had too many functions for you as a beginner. This audio interface device looks fantastic and is perfect for any beginner. Despite having entry-level hardware, it is still a great choice that will allow you to benefit from crystal-clear audio quality throughout the whole music creation process.

One of the least expensive options in this comparison is the Focusrite Scarlett 2i2. The fact that cheap interfaces frequently also have inferior performance and features is one of the worries that many consumers have. As you increase the gain or some other setting, many start to hiss and make noise. However, given our testing of the Focusrite Scarlett 2i2, we can confidently state that you won’t encounter these problems.

However, considering that the producer, Focusrite, is renowned for the excellence of its goods, this quality is not all that surprising. The Focusrite Scarlett 2i2 is just another example of their high-quality audio interfaces and tools. The Focusrite Scarlett 2i2 has the same preamps as much more expensive audio interfaces, despite being a tenth of the cost.

The best feature of this device is its performance. The Focusrite Scarlett 2i2 does not place an excessive amount of strain on your computer, despite the fact that you get outstanding quality even at low buffer settings. In contrast to what we typically experience with audio interfaces at this price point, we did not experience any typical issues during use, such as dropouts or cracks.

When selecting an audio interface, latency is a crucial factor to take into account, so we are happy that the Focusrite Scarlett 2i2 has a very low latency. Also included with the Focusrite Scarlett 2i2 is zero-latency monitoring. The signal indicators are yet another noteworthy aspect of this. These are tremendously useful for sound checking and level monitoring during recording.

It is hardly surprising that this cheap option has certain drawbacks given its price. The fact that it is bus-powered is one of the things we did not like. Therefore, if you run a lot of programs, it might consume CPU resources. Not having MIDI in/out is another significant drawback. And in our opinion, the largest issue occurs when you need to simultaneously record from several audio sources.

The Focusrite Scarlett 2i2 is probably appealing to musicians who work in their homes or who are just starting out. This is the greatest audio interface for Pro Tools – or any other DAW – if you’re just getting started because of its inexpensive cost, simplicity of usage, and excellent support across DAWs.

The RME Fireface UFX II audio interface is one of the priciest on this list, but it is unquestionably worth the money. You won’t find a more complete and strong audio performance on an audio interface than with this one. The capabilities and functions are simply unsurpassed.

You could notice that it lacks the 800 Mbit/s bus speed that is included in prior models as you look over the specifications. Even if that might be disappointing, the RME Fireface UFX II shines in other areas. One is that the host interface now supports USB 2.0. This alone is sufficient to make up for the slower bus speed. There won’t even be any noticeable alterations in that area. In addition, it has four more I/O channels.

The rack-mounted unit has a lovely look. Its exterior is silvered with light blue accents. This gives it a pretty nice appearance on your desk. The knobs and controls are also organized clearly. Every button, knob, and control feels substantial and long-lasting.

Up to four preamp inputs for various purposes are located on the front panel of the RME Fireface UFX II. Additionally, there is a USB port, MIDI I/O, and two programmable headphone outputs. A comparable abundance of inputs and outputs can be found on the back, including eight TRS line inputs, two sets of ADART, USB 2.0 ports, and more.

The RME Fireface UFX II has a vibrant display, in contrast to some of the alternatives we tested. Although this seems small at first, you’ll get used to it and it will make tracking track counts lot simpler for you. The RME Fireface UFX II’s front panel has a ton of controls, with the absence of the routing feature and global hardware settings. There are several positive aspects of RME Fireface UFX II. The comparatively high cost would be the drawback if there were one.

Professional users are advised to use the RME Fireface UFX II due to its many channels and excellent workflow. You can’t really get much better than the UFX II if you manage a studio, but beginners will find it too pricey and daunting.

Here, we’ll take a closer look with the Volt 176 and 276 because the Volt series has the inexpensive market in its sights. These have a totally different purpose and look extremely different from other UA interfaces. There is no hosting for plugins, no onboard processing, and no console software. With UA’s top-notch preamps and, in the case of the two units in this set, the advantage of integrated analogue processing, these are plug-and-play.

On the front of each are combo XLR/TRS inputs (the 176 has just one), phantom power, instrument controls, and headphone ports. Stereo outputs, a USB port, and MIDI In/Out connectors are located on the back. Both interfaces have an external power option, are bus powered, and come with a variety of instruments and effects, such as LABS from Spitfire Audio, Melodyne Essential, and Ableton Live Lite.

The 1176-style Vocal, Guitar, Fast, or Off one-button compression offered by the 76 Compressor each offers a distinctive flavor without going overboard. The Vintage option replicates the UA 610 channel’s tube simulation, moderate saturation, and top-end lift.

The Volts represent a drastic departure for UA, but they merit to revolutionize the market for low-cost interfaces thanks to their excellent design, plug-and-play functionality, and unrivaled audio conversion. These are excellent, which is bad news for other inexpensive interface designers.