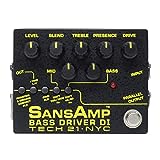 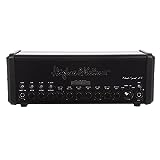 You have a lot more options than you might have initially assumed when it comes to the best pedal amps. The pedal amp revolution, according to some, has been going on for more than ten years. Actually, that “revolution,” in which guitarists have abandoned conventional heads and combos in favour of a guitar amp that can conveniently pack into their gig bag, has only recently begun to gain traction. There’s no denying that top guitar pedal and amp manufacturers across the globe have been focusing a lot of their attention on this sector for a while, so you’ll recognise some of the brands on our list of the best pedal amplifiers below. And as a result of the innovations made by these businesses, floor amps are finally competitive with conventional heads.

Today’s music business is seeing an increase in the use of amp simulator pedals. Everyone, from amateurs to experts, is aware that amp simulators are outstanding pieces of gear that shouldn’t be taken for granted. They provide a wide tonal range in a small, portable package that addresses various sound issues from the studio to the stage. There are several pedals available on the market that may mimic vintage, modern, or classic amps or add some sonic distortion effects to your sound. But why do you need or want to have the greatest amp simulator pedals in your collection?

Look no further than the Strymon for Best Amp Simulator Pedal that strikes just the right mix. The amp simulators are tiny and simple to use, featuring a variety of amp and cab combinations and extensive EQ knobs, including ambient ambience sound quality and master volume.

Of course, a pedal amp needs to sound well, and the Iridium does an excellent job of simulating old amps and cabinets. Fender Deluxe, Vox AC30, and Marshall Super Lead amplifiers may be convincingly replicated using the amp settings Round, Chime, and Punch. Meanwhile, the nine speaker cabinet pairings are not only realistic but also incredibly responsive, which is something that many of its simulator/emulator competitors have trouble with. You can also use the Strymon software to upload your own impulse responses (IR).

The Hughes & Kettner Black Spirit 200 Floor aims to be a portable version of the acclaimed Black Spirit 200 Head and Combo, and it succeeds admirably while also providing a number of unique features. The Black Spirit 200 Floor features a digitally controlled analogue solid state preamp with four channels: Clean, Crunch, Lead, and Ultra. This unit also doubles as a multi-channel amp and cab simulator, as well as a multi-effects pedal, thanks to its high-quality digital effects.

The number of knobs and features is too long to go over in this best pedal amps guide, but the Red Box cabinet simulation is one of the clear standouts, making it ideal for recording or going straight to a PA. Sagging control, which allows the Black Spirit 200 Floor to approximate valve amplifier dynamics, is another fantastic feature like bass amplifiers. It’s the attention to detail like this that elevates this unit to the top tier of power pedal amplifiers.

The Tech 21 SansAmp GT2 Amp Emulator Pedal’s fame is well-deserved as one of the best pedal amps on the market. This pedal is not only economical and easy to install on your pedalboard, but it also has a lot of tone possibilities for its size.

With just this box, you can cover a wide range of styles and sounds with three different tube amp sounds (modeled after Fender, Marshall, and Mesa Boogie), mic positioning, and gain settings. While many players see the GT2 as nothing more than a glorified distortion, it’s still a capable amp modeler that gets the aforementioned amp tones down very well.

However, the SansAmp GT2 Amp Emulator Pedal is the oldest device on this list, and the technology employed is a little out of date. That’s especially true when you consider the BlueGuitar Amp1, which effectively eliminates the need for tube amp modelers. Regardless, the GT-2 is an excellent choice for anyone seeking a simple yet versatile distortion pedals amplifier.

This item can be powered by either a 9V alkaline battery or the optional DC power source. It is the best based on customer feedback, and this is due to its outstanding versatility and the wide range of uses and tones that this effects pedal can evoke. The separate Drive and Presence knobs may be used to emulate tube circuits and speakers, and the Blend knob can be used to balance the simulation you want to add to your dry signal. The Bass and Treble controls can also be used to raise or reduce the frequency of your choice. Furthermore, in response to the growing popularity of 5- and 6-string basses, the manufacturer introduced a switch that allows the bass frequency to be adjusted so that it reaches into the lower registers.

The BluGuitar Amp1 Mercury Edition is hard to beat when it comes to creating genuine amp tones from your pedalboard amp. The Amp1 is mostly analogue, with a solid-state preamp driving nano tailored micro tubes for an amazing 100-watt class D amp output, while many of its competitors rely on digital modeling. As a result, you’re getting a four-channel tube amp crammed inside a stompbox.

The BluGuitar Amp1 Mercury Edition is also quite responsive, which is a great plus. Custom control may be used to improve the best electric guitar pickups, including humbuckers and single coils, which is great news for Fender Stratocaster players who have struggled to find acceptable items in the past.

You can conjure up authentic tones from bluesy overdrive to full-blown metal with three drive channels and a customizable EQ setting (especially when plugged into a 4×12 cabinet). And it’s in this category that the BluGuitar Amp1 Mercury Edition excels. Nothing else this small delivers such a punch, making it one of the greatest pedal amps on the market by a long shot.

The DigiTech CabDryVR is a sleek pedal that gives guitar and bass players some cabinet variation. This pedal has 14 cabinet emulations in total, however you might be disappointed to learn that the guitar and bass cabinets are evenly split.This is an excellent purchase if you are a musician who would like cabinet simulation for two instruments. If you’re searching for a pedal that only has guitar emulations, you should probably look for something else.

The Digitech CabDryVR Dual Cabinet Simulator Pedal Bundle wins the award for best kit. It’s made to be simple to operate and takes up very little space on your pedalboard, with whatever other gear you choose to use.

This unit has two inputs and outputs, one of which can be used to connect to your amplifier if you want to blend the two signals for a unique sound. This can generate amazing results both live and in the studio, so it’s worth a shot to see how it works. It includes fourteen impulse responses, seven for guitar and seven for bass, each of which can be set to different cab “sizes” according on your tastes and the sound you’re after.

Overall, this is a well-made pedal with a lot of potential that can withstand a lot of rigorous use. 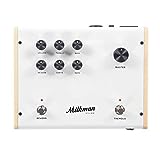 This would easily occupy the top spot on our list of the finest pedal amps based solely on appearances. And, while it is one of its better features, Milkman Sound’s The Amp is more than just a pretty face. It’s a solid-state, class-D power amp with a 12AX7 preamp tube that outputs between 25 and 100 watts.

As a result, it has a reasonable amount of headroom and some nice, warm tube tones, making it a terrific choice for musicians who have had trouble finding that balance in other gizmos. The Amp from Milkman Sound also has variable power, making it a more user-friendly alternative for those seeking for a portable power amp.

In terms of functionality, this pedal amp may be used as an amp head, a tube preamp, a practice amp through headphones, or a DI amp for your DAW when plugged directly into a passive cab. In fact, this could be one of the best applications for The Amp, as it provides far more genuine and warm tones than most emulators.

The outstanding built-in tremolo and spring reverb pedal effects are the frosting on the cake, adding color and personality to this already unusual piece of gear.

With its PowerStage line of pedal amps, Seymour Duncan has made a reputation for itself in the pedal amp market, and for good reason: the brand has built some of the most powerful yet simple-to-use instruments available. The PowerStage 200 is a 200-watt solid-state amplifier with a class D output.

Though it is comparable to the PowerStage 170 model below it, the PowerStage 200 is the superior choice because it has a cab sim and headphone output control, making it a far more versatile alternative. 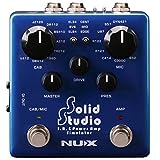 The NUX Solid Studio IR & Power Amp Simulator is actually quite simple to use, despite the fact that it contains a large choice of classic amp/cabinet combos (eight cabinets, eight microphones, and three power amp tube simulations). NUX has crammed as much as possible into this box, making it appear intricate and clever. However, once you’ve gotten your head around the layout, it should be very simple.

There is so much opportunity for tone sculpting here, with simulations of all the big brand cabs, including AC30, Twin and Deluxe Reverbs, Bassman, and so on, as well as all the important mics and placement possibilities. In case any of the other possibilities weren’t enough, the NUX Solid Studio IR & Power Amp Simulator now has USB inputs, allowing customers to load their own impulse log.

It’s probably realistic enough to gig with as far as amp simulations go. But, with so many cab and mic sim choices, it’s no surprise that the IR & Power Amp Simulator finds its best application in the studio, allowing guitarists to produce genuine mic’d up cabinet sounds without having to call in a seasoned engineer.