The two keys to getting fantastic sound in a car radio system are serious power and thorough control, and this amp has both. The D-6.1200 combines the renowned amplifier engineering of AudioControl with its potent Matrix DSP. This single-unit solution offers unrivalled power and tuning options for your factory or aftermarket sound system when you demand aural brilliance.

The D-6.1200 has effective outputs, line-level inputs, and speaker level inputs. It also has polarity, thirty bands of equalisation, input delay, signal delay, and AudioControl-exclusive features like MILCTM, GTOTM Signal Sense, AccuBASS®, as well as integrated input and output RTAs. All of these features can be fully controlled via the DM Smart DSP app from AudioControl.
Power

Max Power and Max RMS of the D-6.1200 6-channel amp from AudioControl are 400 and 200 watts, respectively. The amp has a 125 watts per channel Max RMS at 4 ohms and a 200 watts per channel Max RMS at 2 ohms. This wattage is adequate for even the most demanding aftermarket speakers to operate with plenty of headroom. A pair of 2-way components can be driven by four of the D-6.1200’s channels, and the fifth and sixth channels can be bridged for a maximum power of 400 watts. This amplifier may also be used in 3-channel mode to power three subwoofers with a combined output of 1200 watts and a maximum power of 400 watts for each.

The D-6.1200 amp’s frequency response allows it to reproduce audible frequencies up to a high level without significantly altering the sound. The frequency response of AudioControl’s 6-channel amplifier ranges from 20 to 24000 Hz. The amp’s 102 dB signal-to-noise ratio and 0.25 – 8V input signal voltage work in conjunction with this to create fantastic sounds without distortion. The D-6.1200 6-channel amp from AudioControl can manage output impedance at 2 and 4 ohms in terms of resistance. This impedance happens in a bridged channel method with a supply voltage of 14.4V DC.

Power and clever versatility are combined in one elegant cast aluminium chassis with the D-6.1200, making it perfect for OEM integration and aftermarket designs. The built-in Option Port of the D-6.1200 ushers in a new era in vehicle audio by enabling high-res streaming directly into the DSP. Additionally, it enables the use of exclusive linkages for upcoming controllers, inputs, and interface solutions.

Thanks to its eight active speaker-level inputs, you can connect this amplifier to almost any factory system, even if it has discrete pre-filtered, time-aligned, and boosted signals going to various factory speakers and tweeters. Additionally, since AudioControl’s Great Turn on (GTOTM) signal-sensing circuitry automatically turns the amp on whenever it detects an incoming signal, you won’t need to send a second turn-on line back to the receiver.

Onboard LEDs inform you if a source is too powerful and causes distortion as well as how to optimise signal flow for inputs and outputs. Finally, you can choose sources, change settings, and remember presets from the front seat using a second ACR-3 wired remote control. This is the Best 6 Channel Amplifier in 2023. 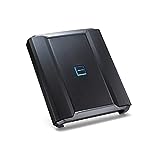 The Alpine R-A90S puts you in the middle of the performance by allowing you to experience your music in great resolution with 6-Channels of Amplification for Goosebumps effects. Underneath its elegant and provocative exterior, the R-A90S conceals a technical innovation powerhouse from Alpine, resulting in the creation of the first full-system 6-Channel Hi-Res compliant power amplifier.

The R-A90S has a staggered power channel layout that allows each channel to host changing levels of power, in contrast to traditional multi-channel amps. This gives the R-A90S the ability to provide the required power to the channels that need it the most. Customers have come to value the 5-channel amplification solution since it can deliver the entire system’s power from a single amp. In order to add value and variety to this market while maintaining the subwoofer strength of a 5-channel, Alpine created a 6-channel amp with mind-blowing power that has twice as much power on the fifth and sixth channel.
Power

Alpine’s R-Series speakers, subwoofers, and amplifiers are known for their incredibly loud and clear sound. The R-A90S is calibrated to improve the attributes of the R-Series speakers and subwoofers for a traditional R-Series experience. The R-5th A90S’s and 6th channels can be bridged to produce a maximum RMS power and maximum power of 200 and 500 watts, respectively.

The R-distinctive A90S’s staggered power channel structure allows it to support different levels of power on each channel, unlike conventional multi-channel amplifiers. With a 2 Bass control knob on the remote, the Alpine R-A90S gives users the option to connect an Alpine RUX-KNOB as an input device (sold separately). The bass knob allows for quick and simple bass adjustments while you’re on the go by adjusting the gain on your amp to control the output and loudness of your subwoofers. This is the Best 6 Channel Amp in 2023.

In place of the factory amp, the Kenwood Excelon P-XR600-6DSP amp offers a lot of power and tuning flexibility to your system while preserving all of the vehicle’s audio and communication features when used with the iDatalink Maestro amp replacement module.

The majority of vehicle manufacturers are already supported by the system, and new ones are constantly being added. The real benefit of all this technological sophistication is that you don’t have to be an expert with oscilloscopes and spectrum analyzers to level down and sum the signals correctly. The tuning is finished by simply flashing the required settings onto the iDatalink Maestro AR module.
Power

With a maximum RMS power of 75 watts per speaker, this Kenwood Excelon amplifier will give your audio more definition and bite. As an alternative, the amplifier can use Channels 1-4 to drive four speakers while using Channels 5–6 in bridged mode to drive your subwoofer with a maximum of 200 watts.

Compared to the conventional method of mixing factory-amplified signals, processing and removing amp noise, and then re-amplifying the signal for the speakers, the amp provides a noticeably cleaner signal. The three-band parametric EQ on the P-XR600-6DSP has centre frequencies that range from 44 Hz to 19.9 kHz in 54 increments. A 10-channel 32-bit 192 kHz digital processor is also included for better signal response.

The impedance of the Kenwood Excelon P-XR600-6DSP amp is 2 or 4 ohms for up to 6 channels and 4 ohms for up to 3 channels bridged. A six-channel, bridgeable, Class-D amplifier from the Excelon range, recognised for its exceptional performance, is the XR600-6DSP amp. Given its small dimensions (12.6 inches wide by 2.1 inches high by 7.1 inches deep), finding a spot for it should be straightforward.

All couplings are constructed on one edge of the amplifier, and all terminals are completely insulated and covered. After the connections are made, a fine trim cap covers each screw access hole for a polished appearance. A tiny four-pin connector, which also serves as the remote trigger for the amplifier and the ground connection for the iDatalink Maestro AR module, is used to attach the AR module to the front panel. This is the Best 6 Channel Car Amplifier in 2023.

JL Audio is a reputable source for sound because it has been around for a while. There is no genuine need to introduce JL Audio’s products. This audiophile business manufactures top-notch car audio parts that are built to current performance requirements.

The XD600/6v2 from JL Audio is one of their best six-channel amplifiers. For a device of this tiny, it has a punch that defies expectations. This compact powerhouse uses cutting-edge NextDTM switching amp technology and a class D amp design to play your music in true quality with less strain on your car’s electrical system.

This JL Audio 6 channel amp is capable of driving up to three subwoofers in addition to six channels operating at maximum range. To put it another way, a subwoofer can be powered by bridging each channel pair. The ingenious cooling mechanism and cast alloy heatsink on this amplifier keep it from overheating and thermal shut-downs, allowing you to continue listening to music uninterrupted. This gem is both strong and attractive, shielding your investment from the elements thanks to the distinctive powder coat finishing, the gasket control cover, and the stainless steel hardware. This amazing device is well worth the cost. 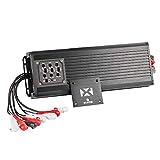 When it comes to power, the NVX MVPA6 Marine-V Series 6-Channel Bridgeable Micro Class D Compact Car Amplifier is a powerhouse. The Marine-V Series Amps can be installed almost anywhere in your car. Your motorcycle, UTV, ATV, watercraft, and golf carts can all fit the Marine-V Series Amps and they take up very little room. Similar-sized amplifiers only deliver half the power compared to larger amplifiers, making the MVPA6 6-channel amp the most compact choice currently available.

These Class-D amplifiers are from the Marine-V Series. This indicates that they are at least 90% efficient. This is a significant improvement over Class-A/B amplifiers, which have an efficiency of under 78%. Because of lower heat shrinks, a lower power requirement for the charging system in your car, and fewer internal components, the amplifier’s overall footprint can be minimised.

The majority of amplifiers on the market make the claim that they are made for boats, motorcycles, and other outdoor vehicles, but their amplifiers are not actually protected in any way. The MVPA6 Marine-V Series amplifiers are completely weather-ready thanks to their IPX67 waterproof rating.

All Marine-V Series Amplifiers have a 3.5mm AUX signal input to work properly with our NVX Bluetooth controllers (like the XUBT4 or XUBT3). You may also use this to connect straight to your device’s headphone jack. As an added bonus, all Marine-V Series Amps come with a bass knob that enables you to bridge two channels together and utilise a subwoofer to its maximum ability. This is your best choice if you’re looking for a strong, portable amp. The Marine-V Series MVPA6 6-Channel amp has a tremendous punch despite its compact size. Its maximum power is 900 watts, while its maximum RMS power is 150 watts.