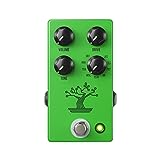 Invest in one of the top Tube Screamer clones if your signal could use a little more dirt. Sure, the original (and fabled) Ibanez Tube Screamer pedal is a fantastic option, but there is a tonal range of TS-inspired alternatives that has yet to be fully realised. You should have no trouble finding something to fit your taste because the pedals in this guide are capable of a wide range of tones, ranging from clean-boost territory all the way to gurn-inducing gain at the twist of a knob.

We shouldn’t be surprised that Ibanez’s Tube Screamer, one of the most popular and commonly utilised overdrive pedals available, is also one of the most mimicked. In the business, “cloning” pedals is a fairly regular process, and it’s typically done for legitimate purposes. Most pedal manufacturers strive to imitate famous tones from legendary performers of yore, and most of them used Tube Screamers, particularly in the case of overdrive and distortion.

Of course, it’s subjective to call something the “best,” but the seven pedals listed in this guide are the ones that really “spoke” to us. The following pedals stood out as the finest of the group for a variety of reasons, including incredible value for money, outstanding durability, fantastic appearance, and crazy tone.

The original Tube Screamer pedal is the Ibanez TS808. The pedal soon gained popularity because to its characteristic mid-hump, which was introduced in the late 1970s. The TS808, like many other overdrive pedals, enhances your guitar’s signal. However, it does not raise all frequencies equally; it disproportionately amplifies your signal’s mid-range frequencies.

This allows you to cut through the mix, and it works particularly effectively with Fender amps and Stratocasters, which have a lack of mid-range. This is why Stevie Ray Vaughan’s version worked so brilliantly. The pedal added warmth and brawn to his tone by bringing back all of the mids.

Legendary guitarists in a variety of genres have used the TS808, including Stevie Ray Vaughan, Gary Moore, Noel Gallagher, Andy Timmons, and Mick Thomson of Slipknot. With just three parameters (overdrive, tone, and level), you can quickly transition from a warm and lovely crunch to an all-out death metal shredding tone.

The Ibanez TS808 Pro is a vintage reissue of the original pedal. This is the standard by which all other Tube Screamers are judged. While it lacks some of the more current capabilities of other pedals (such as true-bypass), it sounds amazing and has a great vintage vibe. The sound has been described as having a pleasant and creamy quality by certain listeners. But it’s all a matter of opinion. This is the Best Tube Screamer Pedal in 2023.

The Ibanez Tube Screamer Mini is the most popular Tube Screamer pedal on the market. With a few adjustments, this pedal is based on the original Ibanez TS808 from back in the day. The addition of True Bypass ensures that your tone is unaffected when the pedal is turned off.

It’s really well-made, and the controls have a premium feel to them and the tone is excellent. It’s an excellent alternative for guitarists who want a traditional overdrive tone but don’t have a lot of room on their pedal board because of its small size.

If you’re searching for a terrific deal, the Tube Screamer Mini, which was just released, is a fantastic option. The TS808 is modelled by this, however it comes in a considerably smaller package. So, if you’re looking for a way to conserve room on your pedalboard while also saving money, the Tube Screamer Mini could be a great option.

The original Tube Screamer has been reissued as the Maxon OD808. In reality, Maxon was the first to develop the TS808 circuit in 1979. It was rebranded and marketed as an Ibanez guitar. It does, however, differ from the original in a few ways. The noise floor, for example, was reduced, and the switch was replaced with one found on modern pedals.

Because the primary parts and sounds are identical, the Maxon OD808 is the counterpart to the Ibanez TS808 or TS9. After all, Maxon was Ibanez’s manufacturer from 1994 until 2002, and this pedal has a lot in common with the TS808.

The Maxon OD808 is even better for single coil guitars because to its enhanced noise floor. We’ve got the standard overdrive, tone, and level settings (called balance). The pedal is powered by a 9v power supply or a 9v battery.

The OD808 features three simple settings, similar to the TS808, for overdrive, balance, and tone, but the possibilities for diverse guitar sounds are unlimited. This iconic pedal may be used as a clean boost, boosting the mids and making the guitar tone stand out without adding any visible distortion.

You may also use it to create warm overdrive tones, which are ideal for blues and rock. Another way to use this pedal is to turn it all the way up for a truly distorted metal sound! It yells without turning everything to mush.

The original JRC4558D chip, which was also found in the original Ibanez 808s, is included in the OD808’s design. It costs roughly $150, and you’ve probably heard several guitarists use it, including Joe Satriani, Misha Mansoor, Devin Townsend, and others.

The Bonsai is a single pedal that has nine vintage and often hard-to-find variations of the classic green overdrive. JHS creator Josh Scott studied hundreds of variations of the legendary stompbox and faithfully replicated their circuits while designing the Bonsai. He was thorough, utilising an Audio Precision analyzer to capture every peculiarity of the original components. He also factored in drift, given that the original pedals were decades old and their components had deviated from their original specifications.

The JHS Bonsai does for screaming green overdrives what the Muffuletta accomplished for massive fuzzes. Put the Bonsai on your pedalboard and you’ll have unrestricted access to four decades of pedals. You can choose from nine distinct audio textures. Do you want to do a classic mid-bump grind? It’s in there somewhere. Dirty boost like SRV? Yep. Low-gain grit like John Mayer? You’ve got it, plus a lot more.

The Bonsai isn’t a modeller; its components are identical to those found in the source units. When you use the Bonsai’s rotary control to pick a mode, your guitar signal is routed via a circuitry duplicate of the original pedal. With the Bonsai, you get nine overdrive pedals in one compact package.

The end output is a copy, not an emulation. You’re playing through the same circuitry as the original pedals when you plug into the Bonsai. There’s no computer modelling involved – it’s purely analogue. This is the Best Tube Screamer Clone Pedal in 2023. 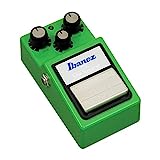 The Ibanez TS9 is one of the most popular overdrive pedals of all time. It has a particular tone that may be heard on a variety of records. The TS9 Tube Screamers are a later version of the TS808. They first appeared in 1981. Despite being quite similar to the original Tube Screamers, the TS9’s circuitry are slightly different from the TS808.

The TS808 offers a smooth, vintage sound, but the TS9 has a more current and edgy tone. In addition, the TS9 is $50 less expensive than the TS808. Both are excellent overdrive pedals, but the only way to know which you prefer is to try them both out.

The TS9 has three simple controls, similar to many other pedals on this list: drive, tone, and level. The sound is aggressive, sophisticated, and controlled at the same time. It’s a must-have for any guitarist’s pedalboard, and it’ll help you cut through the mix with both lead and rhythm guitar sounds.

The TS9 is ideal for a wide range of genres, including rock, metal, blues, and country. The pedal has a low learning curve, and the subtle differences make it a highly flexible pedal. John Mayer, James Hetfield, Stevie Ray Vaughan, Ray Toro, and Buddy Guy have all utilised this pedal. 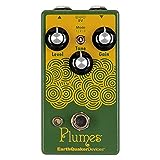 The EarthQuaker Devices Plumes has pushed things to a new level of usability and tone, picking up where the Tube Screamer left off. A 3-way toggle switch controls the type of clipping employed in the circuit, in addition to the normal level/gain/tone parameters.

The first option provides symmetrical LED cutting. If you’re looking for compression and crunch, this is the product for you. Option 2 is best utilised as a clean boost because it completely eliminates clipping. Finally, with option 3, the Plumes adds asymmetrical clipping to the mix. This provides a more transparent tone and a looser feel, according to EarthQuaker Devices. This is a fantastic addition to the pedal.

While EarthQuaker Devices is known for their higher-end pedals, the Plumes is one of their more budget-friendly options. And it’s a terrific addition to any pedal board.

The Electro Harmonix East River Drive might become your new go-to drive pedal if you’re craving the classic Tube Screamer sound but are having trouble justifying the high price tag associated with some TS-style pedals. The East River Drive is a straightforward but tonally striking endeavour, like other Tube Screamer knockoffs. This pedal feels like it should have cost much more given the way the volume, tone, and drive knobs are arranged on the sturdy metal box. Given that there are only three tweakable parameters, the potential for tone variation is enormous, which is one of the many reasons why we highly recommend the East River Drive.

You’ll understand why once you’ve adjusted the gain to sear since this pedal really channels its inner TS808 with considerable energy. It has a heavy metal enclosure with a classic overdrive tone, so it was clearly built to last. It can handle almost every gigging situation you can think of. Although it’s not nearly as sophisticated as some of the more expensive options on this list, a Tube Screamer undoubtedly won’t provide you the sophisticated overdrive you’re looking for.

With their remarkable multi-effects pedals, electric guitars, and guitar amps, Mooer is swiftly becoming a household brand in the world of guitar effects and accessories, but their reputation first rose due to their small pedals, one of which is the Green Mile.

Its inspiration is quite evident, just like any other green overdrive pedal available today, but as a result, the tones you can obtain from this device are seriously excellent. The Green Mile has two operating modes—”warm” and “hot,” both of which offer soil that is smooth and tube-like. As expected, the “warm” setting gives a touch-sensitive, natural-sounding drive, while the “hot” mode raises the gain levels for additional crunch.

The Green Mile’s layout is impressive given its compact size, and the huge “overdrive” control makes creating tone changes on the fly a breeze. However, if you don’t have very good footwork, you can find yourself nudge this dial when activating or deactivating the footswitch. This pedal requires an additional power supply, which is not included with the pedal because there isn’t a battery compartment. However, it’s not the end of the world, and we shouldn’t anticipate too many features at this affordable price.