Tremolo, as used in music, is the rapid repetition of a note to create a trembling sound. Frequently, the phrase is mistaken with vibrato. Listening to the note’s pitch or signal that has been impacted by these effects makes it simple to tell the difference. Tremolo is a technique where a note’s volume changes as it is repeated, giving the impression that it is moving while maintaining a stable pitch by music producers.

Tremolo is a tool that can be used in contemporary music production to provide tonal dynamics to a signal. The expression was once only used in relation to bowed string instruments like guitars or violins, but it has now come to be used more broadly in various musical contexts. Tremolo is a technique used by vocalists to produce a quiver over a sustained note. Tremolo is a rhythmic phrase that describes the rumbling sound produced by soft, quick, repetitive drum beats on percussion or drums. Additionally, electric guitar and keyboard musicians frequently apply the effect.

A tremolo effect uses amplitude modulation to vary the volume of a signal. A low-frequency oscillator is used to send a signal into a tremolo effect unit (LFO). The signal’s power gradually increases and decreases as a result of this LFO. A wavering or quivering sound effect is the end outcome. The rate of amplitude modulation slows down as the LFO’s frequency decreases. Electronic Tremolo can be produced in a few different ways. Harry DeArmond, who created the Model 800 Trem Trol in 1948, is thought to have originated the electronic effect.

Soundtoys Tremolator is a simple but powerful tremolo plugin. You can play with a wide range of rhythmic and dynamic parameters on two simple interfaces provided by this vst plugin modulation effects. The Tremolator’s emulators are modeled after vintage analog gear circuits like the Fender Vibrolux amplifier.

You can apply a variety of rhythmic parameter adjustments to the LFO of your Tremolo effects using the rhythmic editor for vibrato effect. You may create some genuinely authentic volume modulations by using these settings, which include frequently ignored rhythm control elements like groove and accent. You can use this function to slightly modify the slope or curvature of your LFO waveshape. In the graphic pane of the editor user interface, you may create straightforward LFO patterns from scratch or bring in preset forms for altering speed and depth control. A smoothing feature is also included in the editor to help eliminate any pops or hiccups brought on by the processing of the stereo panning effect.

The Tremolater resembles a product made by guitarists for guitarists in both appearance and sound. However, the addition of the Rhythmic Envelope Editor turns it into a useful tool for anyone wishing to use their Tremolo to produce punchy, tight modulations. This plugin is incredibly light on the CPU and links readily with external devices, making it an ideal tool for producers or engineers who employ huge effects racks. This is the Best Tremolo VST Plugin in 2022. The MTremoloMB from MeldaProduction, arguably the most potent tremolo tool in the world, offers 6 separate frequency bands, each with its own set of parameter controls. From subtle vibrations to unique movement, the MTremoloMB does it everything. With so much capability, this plugin can be a little daunting at first. Fortunately, Melda has put together a fantastic set of defaults to get users going. A user can access the deep control panels and multiband settings on the “edit screen,” while the “simple screen” provides a condensed view of the plugin and a few controls.

In addition to a completely configurable sequence of multiband crossovers/filters, the plugin action tremolo boasts more tremolo parameters than any other tremolo effect on the market. Customizable LFOs, audio level followers, envelope generators, pitch detectors, and a randomizer are used to control the effect. For unheard-of audio possibilities, switch between 4 of the plugin’s 8 distinct “A/B-style” instances. This plugin can also handle numerous audio formats, extending from mono and stereo (left and right) to mid-side and even ambisonic processing. It would take a full post to detail all the amazing features of this premium plugin.

We may sing numerous praises about the MMultiband Tremolo plugin. The notion of using multiband mechanics to study the tremolo effect is fresh but intriguing. If used properly, you can create countless volume automation sequences that will breathe new life into any monotonous parts of your mix. There is an Easy Mode feature with straightforward controls that are simpler to understand if you find the interface frightening. This is the Best Tremolo Plugin in 2022. 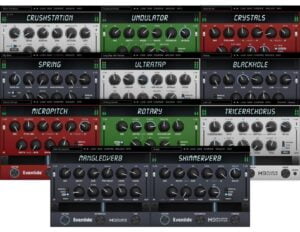 The H9 Plug-in Series Bundle, a legendary assortment of potent effects from the H9 Harmonizer®, is now available. Built for the modern producer, the H9 Plug-in Series Bundle offers everything you need to reverberate, modulate, delay, crush, pitch shift and saturate your audio. Valued at over $1100 if purchased separately, this collection features some of the most sought-after Eventide effects. All producers, engineers, sound designers, and artists that want to add expressive effects to their sound should have this toolkit for tremolo rate.

The revolutionary RIBBON control, which enables you to switch the effect between two settings, is a feature shared by all H9 Plug-in Series tremolo plugins. This greatly improves and simplifies automation for sweeps, transitions, and effect throws. For a tactile advantage, use a MIDI keyboard to control the Ribbon using the mod wheel. Be on the watch for “Freeze,” “Flex,” “Swirl,” and the “Hot Switch” as several of the H9 Series plugins provide distinctive performance buttons.

The Tremolo preset from Eventide’s well-known H3000 analog multi-fx processor served as the inspiration for their Undulator tremolo sound. The interface will be easy for most guitar players to adjust to as it resembles a stompbox device. The controls on this plugin are easy to use for real-time use and would fit live performance circumstances rather well.

If you’re someone who likes to employ Tremolo in their effects chain during composition or live performances, you’ll enjoy the Eventide Undulator. It may not be the best plugin for building careful volume modulation patterns or sequences. Still, it can be handy for generating modulations that you can tune on the go. The addition of the extra LFO settings makes for some intriguing modulations when patched in with the spread parameters and is great for giving signals a dreamy feel. This is the Best Tremolo Plugins in 2022. With more control over tremolo speed and wave structure, the Kuassa Efektor TR3604 is an incredibly straightforward plugin that replicates vintage volume modulation. With few controls, this user-friendly plugin provides us with an excellent tremolo effect for linear phase.

To swiftly change the main LFO waveshape of your Tremolo, utilize the 3-Way Waveshape Switch. You can pick between sine wave shape, square, and triangle slopes. This switching between shapes can also be automated using a metronome. You can build up two sets of settings to compare using a toggle switch with this A/B Switch. This is useful if you want to include several types of tremolo sounds in a song while applying the effect live. The form parameter of the Efektor offers three different modulation options. Smoother slopes will be implemented on your LFO by setting the Shape control to lower values. Steeper slopes and more recognizable modulations result with higher levels.

For those seeking a small, straightforward tremolo emulator or who are inexperienced producers or engineers, Efektor by Kuassa Audio is the ideal Tremolo. Regarding tremolo production, this plugin just offers the bare minimum for a rhythm editor, although Kuassa does a respectable job of covering the fundamentals.

The compact design of this plugin is its best asset. Some producers or engineers lack the financial means to add complex plugins to their CPU burden. Some people favor using plugins without numerous dials, graphs, and switches. Many people may warmly accept the Efektor plugin in these circumstances.