If you’re not familiar with mics in general, finding the finest wireless mic can be difficult. For live performances, we’ll frequently use wireless technology. As a result, many of the mics we’ll be looking at today are the best cordless vocal microphones on the market. The options we’ll suggest usually come with wireless receivers (though you should double-check before buying), and using microphone preamps never hurts!

This kit is part of Shure’s GLX-D Advanced ecosystem, which is where the company’s wireless devices start to become serious. You can trust the sound quality because the bundled mic capsule is from an SM58, possibly the most iconic live microphone of all time. The housing is made of molded ABS, which is fine but lacks the solidity of some of the mics we’ve evaluated. It has a simple design, with only an on/off button and a multi-colored battery-status LED to break up the functional lines. The provided lithium-ion battery is said to have a range of 30 meters and a battery life of up to 16 hours, and it can be recharged using the compact dock found on the front panel of the GLXD4R receiver.

The classic Shure SM58 is known all over the world for its sturdy construction, bulletproof performance, and outstanding auditory character, and it’s now available in wireless form. The 2.4GHz digital transmission provides a rock-solid connection, although it only has a range of 30 meters, which is enough for most purposes but falls short of certain competitors. The microphone features a lithium-ion battery that lasts up to 16 hours, and the GLXD24R receiver includes a convenient charging port that eliminates messy cable runs. Although the appearance appears to be a touch archaic, its easy operation allows anyone to “unplug” and play.

The GLXD4R is a stylish device with an easy-to-read LCD screen that shows channel information, gain settings, and battery life remaining. It’s well-made of cast metal and should last a long time, especially if installed in a rack cabinet. Auto setup is available via a one-touch button, or you can manually enter a channel and gain settings.

So far, everything has gone well. If you connect the GLXD4R to other items in Shure’s GLX-D Advanced ecosystem, however, life without wires becomes even more joyful. With the addition of a Frequency Manager, you can fit six receivers onto a rack and manage them all from one location. Increase the number of receivers by a half-dozen at a time by adding more Frequency Managers. For busy stage managers and FOH engineers working in larger, more demanding venues, this central management functionality is a godsend.

Purchase one kit with the confidence that the 2.4GHz frequency will not be phased out anytime soon, and that you may expand your nascent wireless system as demand grows and your budget allows. 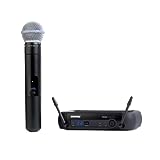 The Shure Beta-58A is a popular microphone and one of my personal favorites to use. It can be used for a variety of things, including singing, public speaking, and even streaming and videos, thanks to its powerful voice presence. The beta-58 featured a brightened midrange and bass roll-off to limit the proximity effect, with a frequency response suited for singing.

The Shure Beta-58 does more than just provide lovely sound; it also controls the sounds you don’t want. This cardioid microphone, like other Shure vocal mics, focuses on your voice while blocking out background noise. The sophisticated pneumatic shock mount mechanism built-in reduces handling noises to allow you to walk about with it.

The Shure PGXD4 wireless receiver is also something to consider. The sampling rate is 24-bit / 48kHz, offering you the maximum ability to transmit high-quality sound. Because of the automated processes, it’s essentially plug-and-play, with one-touch sync for your transmitter and receiver. It’ll also rapidly discover an open frequency line for your microphone! And the Shure PGXD24/BETA58 has a lot more to offer. You’ll see why it’s our top pick for cordless microphones, so have a look at the best wireless microphone under $100. 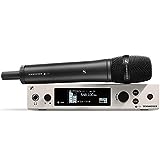 Sennheiser is a well-known and well-respected manufacturer of wireless microphones. Its products can be found in theaters, music halls, festivals, and television studios, among other places where excellent audio is required. If you want to get into the manufacturer’s pro-level G4 architecture, the EW 500 G4-935 is a great place to start. Your initial payment will give you access to the company’s extensive accessory catalog, which includes anything from headset mics to wireless guitar and bass packs.

This kit includes a dynamic MMD 935-1 cardioid capsule and an SKM 500 G4 handheld transmitter (the mic body). This capsule may be replaced with any other G4 capsule from Sennheiser, whether it’s a condenser or a supercardioid. Even better, because Sennheiser owns Neumann, you can utilize one of the company’s condensers to get that classic Neumann sound.

The EM 300-500 G4 rack-mountable receiver is stunning, especially with its large, bright OLED display. It’s also a powerful beast, capable of producing RF signals of up to 50MW if local laws permit. There should be no shortage of useable frequencies, too, with up to 88MHz of UHF on offer and 3,520 of them to choose from.

The unit polls both of its independent receivers on a regular basis, selecting the one with the strongest signal. This is far more advanced than systems that just switch between two antennas and ensures extremely consistent performance. The EM 300-500 connects to Sennheiser’s Wireless System Manager software for enhanced frequency coordination in multi-channel settings, allowing you to expand your wireless rig.

The ULM302MIC from Behringer is a great option for those on a tight budget looking for wireless microphones. Behringer has jammed the full kit into an economical box here for the same price as a single microphone from other brands, and it doesn’t stop there by providing two mics as well. Of course, several features found on competition devices have been deleted to keep costs low, such as a poor 60m line-of-sight range. The mics do not come with rechargeable lithium-ion batteries, therefore users will have to buy AA batteries in bulk. Overall, though, it’s a lot of gear for the money.

The two microphones are the reason for the double features. And, given that a single Shure SM58 mic – already an excellent deal in our opinion – costs almost the same as this entire setup, you’d have to argue that Behringer has succeeded in halving the price. Unsurprisingly, the ULM302MIC lacks some of the features seen in comparable models from Sennheiser and Shure. However, if you’re on a tight budget, it’ll suffice. The 2.4GHz operation is mostly trouble-free, and digital transmission means there’s no interference or hiss — though feedback could be better controlled.

The setup is automatic, and the line-of-site range is 200 feet. It’s only a shame there isn’t a rechargeable battery included, because AA batteries can get expensive. 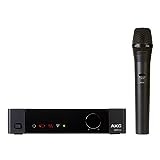 This system is best described as “unplug and play.” It’s cheap and fool-proof, and it’s aimed towards artists who want to focus on creativity rather than technology. In most situations, the 2.4GHz operation will suffice, and it also travels well. It’s only a matter of pressing a button to couple your channels.

There are no bad surprises waiting to catch people who enjoy delving into the technical aspects. The audio quality is 24-bit/48kHz, the transmission is digital, and there’s even AES 256-bit encryption, which isn’t useful for vocalists but useful for presenters speaking at private events.

Although it’s unlikely that buyers at this price point will wish to create a wireless mega-system for a large festival, it’s useful to know that up to four DMS100s can be synchronized together for use at the same time. One with a cardioid handheld mic and the other with a bodypack transmitter that can be used with a headset or clip-on mic are both available for the same price.

AKG built the DMS100 with a simple one-touch approach for creatives who desire a versatile wireless mic system but don’t require the high-end performance of premium models. Sure, it’s only 30m, but it should do for most purposes, especially if live streaming from a small studio. At the same price, you can choose one of two kits: one with a cardioid microphone and the other with a bodypack transmitter that’s great for lapel mics or hands-free headsets. For private or confidential projects, it’s AES 256-bit encrypted and compatible with up to four channels.