The idea of saturation itself was first introduced in the 1950s and 1960s, a time when music was first being recorded on tape in studios. Saturation was more of a phenomenon that happened naturally when a tape recorder was loaded with too much volume—more than it could handle. Saturation resulted from the recorder compressing those higher signals to fit them into its spectrum. So, in a sense, saturation is an overdrive or compression that happens spontaneously.

Saturation pedals mimic that result by amplifying specific frequencies that give your music a thicker, warmer quality. Additionally, the overdriven impact does not occur immediately. You can have a lot of control over the frequencies you want to enhance without any overdriven effects depending on the pedal you’re using. In order to assist you pick the ideal pedal for you, we’ll compare the top four saturation pedals as of 2023 in this post.

Since the Strymon Deco essentially combines two pedals into one, it is the most popular option among guitarists. Due to its extensive control over the sound output, this pedal quickly rose to fame after its 2014 debut. In general, it has a double-deck tape recorder effect plus a saturation effect.

A sizable pedal, It features a square shape and is 1.75 X 4 X 4.5 inches in a robust metal chassis. The I/O sockets, EXP input, and power input are all positioned on the top of the pedal, making it ideal for pedalboards. The Strymon Deco is split in half as described above. There is a Saturation knob on the pedal’s left side. It is connected to the Volume knob that is immediately below it and the Bypass On/Off switch. The Lag Time knob is located on the right side of the pedal. A three-way toggle (sum, invert, and bounce; more on this later) and a Bypass On/Off switch are connected to it. The Blend knob is in the center.

The Saturation knob regulates the desired level of saturation: from 0 to 11 o’clock, you amplify the low-end frequencies and get a thicker, fuller sound; from 12 o’clock to max, as you increase the compression, you get an overdriven to distorted sound. The saturation effect’s volume is adjusted by the Volume knob. Depending on where it is positioned, the Lag Time knob can perform several tasks. You must first comprehend what the double-deck tape recorder effect performs in order to comprehend how it functions. Your original sound is played in parallel with the new sound that is produced. The Lag Time knob now determines when that second sound is played; the higher it is turned, the later the parallel sound is played. You may adjust your delayed sound in a variety of ways, including flanger, chorus, and echo.

The Wobble knob’s function is now to be seen. The vibrato effect sound is produced by controlling the oscillation between the original sound and the parallel sound using the wobble knob. The three-way toggle controls how the Wobble knob functions.

The sum mode, as previously explained, plays both signals simultaneously. The double-deck tape sound and the original sound will diverge from one another and meet up at various locations as a result of the invert mode’s inversion of the second signal, which results in a greater range of oscillation between the two sounds. The original signal is combined with a second double-deck tape recorder sound produced by the bounce mode. Due to the fact that it produces a stereo effect, this mode is very helpful with stereo signals.

The sound palette is ridiculously diverse. That broad range is a result of the pedal’s dual function. It can be used to produce sounds that range from a simple frequency boost to an insane flange or echo with significant distortion. You may also regulate the amount of each effect you want in your signal by using the Blend knob. It can actually take the place of your distortion pedal because to its extremely high compression rate. It has a 500ms maximum lag time, which is more than you would experience with a double-deck tape recorder in real life. Additionally, although being digital, the pedal’s sounds are flawless analog pedal impersonators. This is the Best Saturation Pedal in 2023. 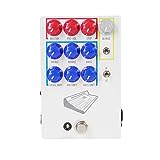 Some of rock’s most legendary guitar tones were produced by skipping the amp and plugging straight into a vintage recording console, including the Beatles’ “Revolution,” Led Zeppelin’s “Black Dog,” and Neil Young’s “Cinnamon Girl.” On your pedalboard, the JHS Colour Box V2 adopts that idea. JHS Colour Box V2 Preamp is a tone-shaping wizard with a transformer-based, totally analog design that can recreate vintage tones or assist you in creating your own signature sounds. The Colour Box V2 not only sounds wonderful on guitar but also on bass, keys, and vocals.

Due in part to the Colour Box V2’s Lundahl transformers, a favorite of Rupert Neve, it has a buttery, melodic, and harmonically complex nature. The Colour Box V2 is a sledgehammer or a scalpel thanks to its switchable Hi/Low settings, dual gain stages, and precise Baxandall-style tone controls. Use it at low gain settings to softly enhance your tone, push it for crunching but understandable distortion, or completely dull it for some of the nastiest fuzz you’ve ever heard.

JHS retained every feature that made the Colour Box V1 a modern classic while adding a ton of innovative new features, including a Hi/Lo switch for ultra-clean headroom, the ability to supply condenser mics, active ribbons, and mic activators with 48-volt phantom power, EQ Shift controls for precise frequency sculpting, and an additional output transformer for even more console-style mojo. 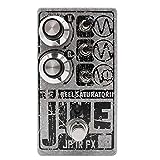 The Akai GX 210D reel tape machine from the 1970s served as the inspiration for the JPTR FX Jive. You can therefore tell right away that it was designed to mimic old studio sounds. The initial iteration of this pedal, which is German-made, appeared around 2018. Despite being a little pedal, it contains numerous adjustments and features. It works well for enhancing clean or distorted channels as well as for achieving grunge and garage band sounds.

The JPTR FX Jibe has three toggle switches for clipping diodes (more on this later), a bypass On/Off button, and two knobs (Volume and Gain). It has a power plug input, a single output, and a single input. This pedal is not battery-operated.

The JPTR FX Jibe is incredibly small. It is 6.5 X 13 X 6 cm in size. It is packaged in a robust metal chassis. It has knobs that are stacked on top of each other and are rather massive for its size (Volume on top and Gain below). Near the center of the pedal, adjacent to the knobs, are the diode On/Off switches. Additionally, the pedal’s center bottom is where the bypass On/Off switch is positioned. The power input socket is located between the I/O sockets on top.

The JPTR FX Jibe has a distinctive sound. It faithfully reproduces the sound of 1970s studio recordings. It can also be used quietly to enhance the tone of your guitar or even to provide a respectable overdriven signal. The diode clipping switches give your effect a higher pitch of sound. They provide highly compressed distortion sounds that work well for grunge music. They can also be used to recreate the sound of an old recording.

This pedal is ideal if you want to give some of your songs a vintage, extremely compressed feel or if you want to record some music with a garage band vibe. It would be ideal for Grunge music as well.

The EHX Analogizer is a fairly straightforward pedal. There are four knobs (Volume, Spread, Blend, and Gain). It has a power input, a status display LED, an On/Off switch, 1 input, and 1 output. In addition, a battery can power it. It’s a little pedal called the EHX Analogizer. It is 2 X 2.2 X 4.3 inches in size. It features a rectangular shape and a metal chassis. Its power plug is on the bottom, and its I/O ports are located on the sides (input on the right and output on the left). Under the bottom shell of the device is the battery compartment.

There is an analog circuit in the EHX Analogizer. It is powered by a 9V battery or a DC power connector. Both the input and output are mono. Additionally, a real bypass is provided for a chain of unbroken signals. This pedal has a gain range of 0 to +26 dB and a delay range of 3.5 to 65 ms.

The effect of the EHX Analogizer is pretty understated. Because of its low gain, it’s perfect for amplifying your sound and making it stand out. However, it does more than just increase gain; it also increases the low-end frequencies, giving the music a thicker, warmer, and more vintage tone. The mix also affects how the pedal sounds; the more blend you put, the richer your tone will sound. More like an echo sound in operation is the spread. The double-deck tape recorder effect is simulated.