Matte black hues and uninspiring, dull designs predominate in the realm of gaming headsets. Have you had enough of this gray muck yet? Undoubtedly, we have. Today we’re looking at the top pink gaming headset for 2023 in an effort to avoid boredom as much as possible. We’ll go over our favorite selections, which feature comfort, usability, and—most importantly—the color pink.

Of course, giving any old, inexpensive headset a coat of pink paint isn’t sufficient for us. We require stylish pink headphones. This translates to excellent audio, plenty of comfort, and superb build quality. To make this list, the best pink gaming headset needs to excel in each of these categories. Any entertaining bonuses or distinctive elements will also be helpful. 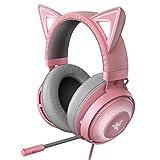 The Kraken Kitty from Razer provides the same functionality and capabilities as the conventional model while adding some color. The pink color of everything, including the earcups, headband, and microphone, contrasts nicely with the grey finish of the earpads and inner headband. The appearance is finished off with a set of detachable RGB cat ears that illuminate the space.

The Kraken Kitty and other Kraken models resemble each other greatly in terms of design. The ear cups are huge and house 50-millimeter drivers, and it has the same bulky shape. Additionally, it offers on-ear volume and virtual surround sound controls, as well as a retractable microphone. The thick, gel-infused earpads, like those on other Razer models, keep users comfortable throughout extended gaming sessions.

The Kraken Kitty is exceptional in terms of performance in addition to appearance. It has THX Spatial Audio surround sound and a USB sound card for connecting to a computer. Because it enhances their feeling of location, some people prefer virtual surround sound. Others who prefer stereo audio don’t notice much of a difference.

With the Kraken Kitty, it’s difficult to go wrong because it looks and functions so well. Its flaws include the fact that it’s expensive and can be too big for some users. Consoles requiring a 3.5-millimeter connector cannot use the Kraken Kitty because it only supports USB connections. This is the Best Pink Gaming Headset in 2023. 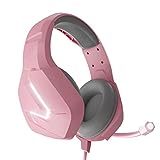 If you want stylish, incredibly comfortable headphones, consider the Orzly Pink Gaming Headset. Thanks to its lightweight aluminum frame and soft foam ear cups, which are wonderful for wearing for extended periods of time without discomfort, the one has a stylish and comfortable fit. In this price range, the headphones come with a noise-canceling microphone that cancels out background noise to make sure your teammate can hear you clearly. More importantly, it contains an in-line audio control feature that makes it simple to operate the LED light, sound, and microphone.

It provides generally good sound for the price range when it comes to sound quality, but don’t anticipate booming bass sound from this. In addition, the headgear functions well with a variety of equipment, including the PS5, laptop, Stadia, Xbox One, and more. Overall, this headset is a solid choice if you want a budget-friendly gaming experience with respectable features. 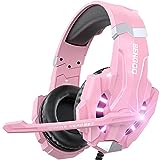 If you want a gaming headset but don’t want to spend a lot of money, consider the BENGOO G900. It is a wired gaming headset that works with a variety of devices, including the Xbox One controller, PS4, PC, and more. The cable is an anti-winding braided cable, which means that you can anticipate a long life from this headset.

In terms of comfort and design, this gaming headset is ergonomically created to offer plenty of comfort & fitting in gaming mode. More importantly, however, is the relatively nice over ear pads & soft cushioned headband that allow you to prolong gaming sessions without any painful discomfort.

It provides a passable 3D surround sound experience that helps you focus on certain gaming features. Thanks to passive noise cancellation, which lowers background noise for the best possible experience. In addition, the headset includes an adjustable headband and a sturdy metal frame, so you don’t need to worry because it will easily adjust to your head size.

Overall, the BEGOO G900 is a good option if you’re seeking for a professional pink gaming headset that is affordable and has good features. 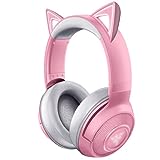 Despite sharing a name with the Kraken Kitty, the Razer Kraken BT Kitty Edition has entirely separate features. The BT Kitty Edition communicates through Bluetooth as opposed to the Kraken Kitty’s USB connection. The Bluetooth connection eliminates the mess that cords produce and works with a variety of gadgets, including PCs and mobile phones. Users can expect a battery life of about 50 hours with the lighting off and 20 hours with the lighting on.