To ensure that your music sounds its best, you’ll need a high-quality amplifier. There are several different types of guitar amplifiers available. We were previously restricted to only two sorts of technology: solid state and valve. The development of computer-driven amplifiers influenced how performers use these instruments in general, as well as how great music sounds in general. In this review, we’ll go through the greatest modeling amps on the market and why you should choose one for your system.

Modeling amplifiers combine the greatest qualities of valve and solid state amplifiers to create a sound unlike anything we’ve heard before. If you play guitar and haven’t yet switched to a modeling amp, now is the time to start hunting for one. However, before you buy, you should understand everything you can about the features of these amplifiers, such as their configuration, power, and the various types accessible. The type of modeling amp you should purchase will be determined by how you want to utilize it.

The Fender Mustang GT 40 relies on decades of vintage amp making to reach the top of this list, which was a challenging feat. Fender had a difficult task ahead of them in creating a digital amplifier worthy of the brand, since, let’s face it, when it came to bluesy tones and technical prowess, it was always difficult to beat a Fender practice amp.

As a lucky buyer of the Fender Mustang GT 40, the first thing you’ll notice is that the included 21 amp voices harken back to the vintage days of old Fender amplifiers — the tone and quality are rich, bright, and stunning to behold. This amp will appeal to both purists and newbies to music in the digital age, and there isn’t anything here to irritate tube amplifier aficionados — everything sounds so true to the vintage Fender sound.

With USB connectivity, a dedicated app, and a whopping 45 different effects, you’ll be copying your favorite guitarist in no time, or generating and honing your own distinct sound in no time with power control. Overall, this is an amazing practice software with near-perfect clarity, quality, and tone, and it’s a creative musician’s dream. This is the Best Modeling Amp in 2023.

The Boss Katana has become one of the most popular non-tube amps on the market in recent years. The MkI Katana wasn’t broken, but they improved it nonetheless, giving us what could be the greatest modeling amp on the market right now. The Boss Katana MkII provides guitarists with four alternative amp styles and an acoustic channel, each with two versions – a total of ten options. From calm and dazzling cleans to classic rock crunch and metal-style saturation, there’s something for everyone here. In addition, the Katana offers a variety of high-quality studio grade effects and sound quality.

Many players appreciate how simple this guitar amp is to operate — all of the controls are there in front of you, and it’s difficult to dial in a lousy sound! We went with the 100W model since it can keep up with a drummer in terms of volume, but the Katana-50 MkII offers the same fantastic sound in a smaller package. This is the Best Modeling Amps in 2023.

The Marshall Code 50 feels like a step back in time, and it’s easy to forget you’re working with a modern amplifier. The appearance, sound, and quality of the tones this thing can produce are all reminiscent of vintage Marshall stacks. This wonderful little modeling combo, on the other hand, has some contemporary age sorcery going on within, and there is so much to do and so much room for creativity here.

The Marshall Code 50 is a 50-watt amplifier, which is plenty of power to get you heard over the din in most practice rooms, and because it’s a Marshall, touring in larger venues won’t be an issue. Marshall channels all of that mid-range power through a 12-inch speaker, which sounds fantastic.

The Code 50 comes with four digital power amp versions and fourteen digital preamp models to choose from. Compressor, Distortion, Auto Wah, Pitch Shifter, Chorus, Phaser, Flanger, and Tremolo are just a few of the effects integrated within the cabinet. Digital delays and reverbs are also included in the bundle. 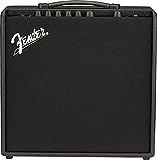 Fender has learned a few things over the years of designing amplifiers, and the Mustang LT50 packs a lot of that knowledge into a small but powerful package. You’ve got some of Fender’s famous clean tones, as well as some amazing crunch and distorted sounds and some great effects.

You may go through several extremely well-designed presets that cover all types of music right out of the box. You can change the preset you’re on with a quick tweak of the control knobs. You may connect the amp to your Mac or PC, just like many modern modeling amps, to go even further into your tone settings.

The Fender Mustang LT50 is an excellent modeling amp like tube amp, especially for novices, though different amp models would be enjoyable for anyone. This is one to check out the best deals if you want a variety of different amp types and effects, all delivered via a high-quality 12″ speaker.

It’s difficult to overlook the Line 6 Spider in any discussion of modeling amplifiers. Although earlier versions of this amp have received some criticism online, the Spider was a ground-breaking design. Furthermore, its most current form, the Spider V MkII, is unquestionably one of the greatest modeling amplifiers available.

You’ll never be short on options with over 200 amps, cabs, and effects to choose from. It also includes a plethora of great-sounding presets that can take your performance in ways you might not have considered before. You have complete control over how you want your tone to sound. You may also turn off the built-in tweeter for a more ‘in the room’ sound or use it for a full-range miked-up amp sound.

Even though the Spider V MkII has an LCD menu on the panel power rating, it also includes traditional knobs – you can switch between operating the amp and the effects section with a simple switch. The 120W version has enough power for jamming with a full band, but lesser versions are also available if you don’t require that much power. 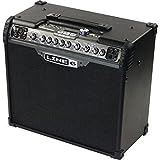 It will be a terrific all-around alternative for a wide range of people, the Line 6 Spider Jam makes it onto our list of the eight finest modeling amplifiers we could locate. This amplifier has no frills, and it has to be the finest of the amps here without the weight of a major amp manufacturer’s name behind it — making it a cost-effective option if it meets your demands.

The fact that this amp comes with a ton of artist-created tones and jams will make it an excellent student amplifier, and it will make endless practicing more enjoyable. The bundled looping recorder is also a great addition for student musicians, and anyone wishing to get into music will find a lot to like here.

This unit has a good 12 amp and cabinet models, which is more than enough to play around with tone and sound connectivity options. There are some cool effects to experiment with as well. The unit has a Flanger/Chorus, Phaser, Tremolo, and Reverb.

Thirty-six configurable settings making it simple to return to your sweet spot. 75 watts of power, delivered through a 12-inch speaker, is more than enough to upset the neighbors. This isn’t a gigging amp, but it’ll get you through your scales, drills, and practice until you’re ready to take the stage. This is the best budget modeling amp in 2023.