Unquestionably the most renowned and beloved synthesizer of all time, the Moog Minimoog has influenced a number of VST emulation programs throughout the years. It was the first synthesizer to be sold in stores and was created by Moog Music in 1970 as a more user-friendly, portable version of the Moog modular. 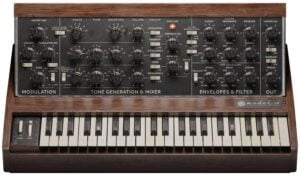 Softube goes to tremendous efforts to keep the ostensibly license-fee-invoking Minimoog name out of conversation. Even still, it is clear from a quick glance at Model 72 that the “vintage monophonic synthesizer” mentioned in the literature is the Minimoog.

A closer look reveals that the Model 72 is more than just a Minimoog knockoff. In addition to the visual differences, there are more controls than you may anticipate because Softube modified the original Minimoog design and added features that were missing from Moog’s masterwork.

This retro icon is a three-oscillator monophonic subtractive synthesizer, for those who are unfamiliar. Six waveforms are shared by the first two oscillators: triangle, sharkfin (which resembles a saw wave), saw, square, pulse, and narrow pulse. The reverse saw waveform takes the role of the sharkfin waveform in the third oscillator. All three oscillators include a low-frequency mode and can have their octave altered from -2 to +2. This is particularly helpful for oscillator three because it may be switched to operate at a set frequency and can be utilized as a modulation source. A noise generator that can generate pink or white noise works in addition to the oscillators.

A 24dB/octave low-pass filter, similar to the Minimoog’s, can self-oscillate on the Model 72. Both the amp section and the filter have exclusive ADS (attack, decay, sustain) envelopes. The option to allow a release stage that affects both envelopes has been added by Softube, and it also uses the decay time of the envelope as a release time.

The Model 72’s filter can feed back on itself while it is being used as an instrument, producing some pleasantly furious undertones and overtones. However, when used as an effects plug-in, the feedback stage is transformed into an external input, enabling you to combine your own sources with the synth’s oscillators before passing the resulting sound through the retro synth’s filter and envelopes.

The Minimoog’s continued success is due to how simple it is to extract the most delectable (and occasionally wackiest) sounds from its small wooden case. Because of this, the Minimoog is most likely the most circuit-analyzed and computer-modeled synth available, giving you a decent selection if you’re looking for one. Among these models, the Model 72 is unquestionably the greatest, and Softube’s upgrades offer cutting-edge capabilities that only enhance the tried-and-true formula. Even if you already have access to plenty of Minimoog emulations, it’s worth a look. Even better, you can combine the Model 72’s vintage Moog-style components with other synth and effect modules from Softube’s expanding collection by using its synth modules with Softube Modular and Amp Room. This is the Best Minimoog Plugin in 2022. 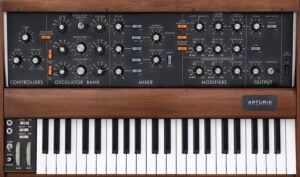 The ever-present MiniMoog has been making its fat presence felt for more than four decades, from the spaceship funk lead lines of the 1970s to the gangster whine of mid-’90s hip-hop. The iconic user interface of Bob Moog’s early 1970s synth, which was and is adored by generations of musicians, was reproduced by Arturia in collaboration with him. We took considerable care to recreate the nuances of this synth’s internal properties because its sound is what truly makes it the Legend of Legends.

With the help of this plugin, you may emulate the Minimoog in 32-voice polyphony mode. Every waveform was replicated. In addition, it offers you extra functions like Automation, LFO, Arpeggiator, and Modulation Matrix that supports up to 8 simultaneous connections in comparison to the original. Another component that enhances the pack overall and can be utilized for formant-shifting effects is the vocal filter. There are one thousand sounds arranged in a good preset browser that enables for advanced keyword, category, and instrument type searches.

The TAE engine from Arturia has once again produced outstanding software. And you have to admire how they handle each plugin’s visual element. This visual design is so well done that it almost gives the impression of having one because every knob is in its proper place. We firmly support Arturia’s use of classic synths. Not only should they be recreated with the utmost reverence, but they should also be improved in the same way if they were created today. Even though an arp mode would be expected, having a polyphonic Minimoog of this caliber is a dream come true for many keyboard players. This is the Best Minimoog VST Plugin in 2022. The frighteningly named Dinosaur Impersonating Virtual Analog Synthesizer, or DIVA for short, completes our list. Diva argues that what sets them apart from the other companies on the list is “sheer realism,” taking the constituent components of several monophonic and polyphonic synths. Real-time techniques from industrial circuit simulators are used by Diva. They push it to the limits of the available computing power using zero-delay feedback (like in the Native Instruments Monark). They also acknowledge that Diva is designed to be a CPU-intensive game.

You can create your own synthesizer using components from any of the simulated models, according to the Diva method. Therefore, any oscillator may be modified with any envelope or LFO and routed through any filter. The outcome may be less accurate to the hardware’s reality, but it sounds very much like analog circuitry. A variety of iconic synths’ waveforms and filters are properly reproduced in Diva. To replicate the uneven timbre of hardware analog synths, even individual voice detuning is allowed from the Trimmer tab.

Regarding requirements, it heavily relies on CPU power, so contemporary CPUs are especially advised for use in Divine mode, which makes use of multi-thread architecture. It simply needs 50MB and 1GB of RAM, but additional memory is always appreciated because of several presets. Support for NKS files is also offered.

Fair enough, this the legend VST is not the specific Moog VST. It is a lot more. It is one of the most adaptable and reasonably priced soft synths available because to the extensive third-party preset library, a wealth of lessons, blog posts, and a vibrant user community. However, at the heart of its sound, it contains Minimoog waveforms and filters, and its interface enables you to duplicate any Moog sound you like. You wouldn’t possibly object if this offer also contained Alpha Juno, Juno 60, and MS20, which are all critical components of both Jupiters. 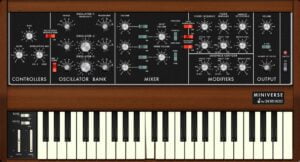 Minimode is a careful virtual recreation of the legendary Minimoog Model D, the father of all portable synthesizers. The legendary Minimoog, which was first produced in 1971, is possibly the most well-known and adored analog synthesizer ever created. It is the instrument most closely linked with the name “synthesizer.” Although it didn’t have the same internals as Moog’s enormous modular synths, it did have the same analog sound—thick, juicy, and “fat”—that hasn’t been matched in 50 years. It established the bar for subsequent synthesizers, gave rise to entirely new musical genres, and influenced a wide range of musicians, including Kraftwerk, Herbie Hancock, Rick Wakeman, Pink Floyd, Parliament, Gary Numan, and countless more.

As the greatest homage to the original instrument, Minimode was created. We concentrated on a single idea: complete authenticity. We examined and tested every detail, curve, and response of the audio in cooperation with DSP guru and regular partner Mark Barton (MRB). From the maple cabinet and textured surface to the recognizable “Cosmo” knobs and switches, the Minimode interface is a precise replica of the Minimoog. We resisted the urge to include unnecessary features that would detract from the essence and vibe of the vintage Model D, such as additional LFOs or effects. Minimode, on the other hand, faithfully reproduces the original’s classic, raw, and powerful sound and feel.

Minimode has you covered whether you’re looking for ominous leads, funk basslines, or cozy atmospheric pads. The resulting tones are so powerful, in fact, that we were compelled to add one particular improvement. We’ve made it simple to dial in two, four, eight, or sixteen polyphonic voices if one vintage synth voice isn’t enough to rock the house. Want exceptional sounds even sooner? A collection of over 250 presets produced by seasoned sound designers is included with Minimode. You may quickly access brass, keys, percussion, sound effects, MIDI Polyphonic Expression (MPE) presets, and of course the iconic earth-shattering basses and leads the Mini is known for.