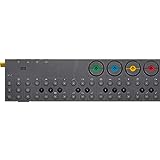 Mini synthesizers, contrary to popular assumption, are not always simple. They do produce a variety of sounds like fm synthesis and wavetable synthesis that can help you improve your skills as a musician, whether you’re a beginner or a seasoned veteran. Mini synths come in both analog and digital variants, and if you’re unfamiliar with them, you’ll be overwhelmed by the variety of options available.

Korg is a well-known Synth manufacturer, and the korg minilogue xd is one of their most capable machines. It’s the ideal mix of old and new, with a few modern digital elements that make it easier to use.The synth has a beautiful and sturdy construction. It’s composed of aluminum and real wood, with switches that have been thoughtfully placed for convenience of operation. Its bright and vivid digital display, as well as the lighted digital buttons that are smooth to the touch, will appeal to you.

In essence, the mini synth features a large number of cross-modulation choices, making it extremely versatile. It has two oscillators that provide the most ballsy bass ever, and the SHAPE knobs allow you to fine-tune the sound. The filter, on the other hand, is rather simple and lacks many bells and whistles. It doesn’t provide the best bass sounds, but it’s great for the basics and can quickly go into self-oscillation.

Two ADSR envelopes, a single LFO, and a modulation stick are also included. You’ll also be able to use the synth’s four different voices in eight different ways for sound design. As if that weren’t enough, the hardware synths boasts 200 presets and a 16-step phrase sequencer thanks to digital upgrades. The Minilogue is one of the best analog micro synthesizers out there because it’s so simple to generate sounds and edit presets. You can quickly change how the knobs and switches work with a preset.

In a summary, the Korg Minilogue is a solid synth with a reasonable price tag that is well worth consideration. It is lacking in a few areas, but its versatility and ease of use make it a worthwhile purchase. This is the Best Mini Synth in 2023.

The IK Multimedia UNO Synth is a digitally controlled analog powerhouse known for its mobility, adaptability, and enormous synth sounds. With the UNO Synth Pro Desktop, IK Multimedia has taken the UNO Synth to the next level, adding paraphonic capabilities, a third oscillator, a second multimode filter, a 64-step sequencer, expanding modulation, and a strong digital effects engine. The UNO Synth Pro Desktop also offers a comprehensive set of sound creation features that place no boundaries on the variety of amazing patches you can build, and it has 32 multi-touch keys while remaining tiny enough to pack in a gig bag for live performances and remote jam sessions. In addition, the UNO Pro Synth uses its paraphonic design to create captivating pads, stabs, and analog synth textures in “chord” mode. The IK Multimedia UNO Synth Pro Desktop is a must-have for lovers of the original UNO Synth and anyone looking for a portable analog synth with considerable capability.

Nothing beats analog when it comes to making thick, organic synth tones! However, even when recording your preferred synth settings by hand in a spiral-bound patch book, old-school analog synths with knob- or fader-per-function designs made it nearly impossible to recall your favorite synth settings. With the UNO Synth Pro Desktop, however, this is not the case with this mini synth. Despite the fact that the UNO Synth Pro Desktop has a fully analog signal path with three VCOs, two multimode filters, and two envelope generators, all of the parameters can be adjusted digitally via four parameter encoders, one universal data encoder, and dedicated knobs for filter cutoff and resonance. Furthermore, once you’ve created a fantastic patch, you can store it as a custom preset to use over and over again – no patch sheets necessary!

The enormous analog growl of the UNO Synth Pro Desktop comes from its 3-variable waveshape filters. Create enormously deep bass patches and multidimensional leads by stacking them in mono mode, or get creative in “chord” mode by constructing unique sounds for each oscillator and playing them paraphonically. The original UNO 2-pole OTA multimode filter and an SSI 2/4-pole filter based on the famous Dave Rossum-improved ladder filter design are the next two filter options for altering the timbre of the oscillators. You can access over 24 different filter modes by combining the filters in series or parallel. Plus, the PWM, oscillator sync, oscillator FM, ring modulation, dual LFOS, and white noise generator on the UNO Synth Pro Desktop provide an endless supply of evocative sounds at an affordable price range. This is the Best Mini Synthesizer in 2023.

What is the OP-Z, exactly? Is that a synthesizer? Is it a sampler? Is it possible to have an audio-visual sequencer? To some extent, the answer is yes to all of the above. The OP-Z includes a 16-track, 16-step sequencer at its heart. Eight of the tracks generate audio, while the other eight are used to manipulate effects and control other devices. The audio tracks are split into two groups, with the first four being sample-based drum tracks and the second being melodic instruments that can use a variety of synthesis engines.

It’s difficult to keep track of things without a screen, but TE has produced a free control app to help you do so (currently iOS-only, but forthcoming for Android too). This connects through Bluetooth midi keyboard and provides complete visualisation of the sequencer, sound engines, and effects (along with some stunning graphics), as well as serving as a screen for the visual sequencers.

Aside from a few minor niggles, there’s a lot we enjoy about the OP-Z. While some may decry the dependency on an iOS app, we find the workflow across the two devices to be really enjoyable. The OP-Z is unlike anything else now available. This is the Best Mini Synths in 2023.

The TB-03 is an ACB-powered clone of Roland’s legendary TB-303 Bass Line synth, with the same look and feel as its inspiration. The tuning, cutoff, resonance, envelope mod, decay, and accent knobs are all accessible, as is the 4-digit display. There are saw and square waveforms, as well as overdrive, reverb, and delay effects.

The TB-03 adds a new Step mode to the original 303’s Pitch and Time writing modes, as well as fine tempo control. While sequences are playing, you can switch between modes, and there’s a dedicated trigger input for driving the internal sequencer. There are additionally MIDI I/O, USB, and CV/Gate ports. The TB-03 takes the original 303’s spirit and adds a twist.

Some would say that Roland should have improved the sequencer and interface further, while others will complain that it isn’t analogue, but if you want a convincing and economical 303 clone, this is it. 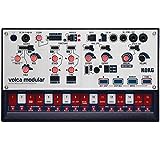 The Korg Volca series would be a strong contender if we were to pick one product line that has had the most impact on the music technology sector over the previous decade. Sure, compact synths have been around for a long time – possibly as far back as the 1971 EMS Synthi, depending on your definition of ‘compact’ – but when the Japanese brand’s inexpensive series of mini instruments was debuted in 2013, it changed the game.

The formula was devilishly simple: a variety of proper synth (and drum) circuitry in the same cheap-and-cheerful form factor, usually analogue and always with a built-in sequencer. The Volcas demonstrated that it was possible to cram a lot of capability into a small package and do so at a low cost. It was easy to dismiss small, cheap synths as toys before the Volca series, but those perceptions have undoubtedly altered, thanks in large part to the Volca line sound capability.

Since the initial introduction of the Volca Bass (an analogue acid box at heart, but capable of much more) and Keys, the line has grown significantly (polyphonic analogue). You’ll find anything from samplers to drum machines, but because we’re mostly interested in synths, we’d recommend the Volca Bass. This is a modern classic beginner synth.