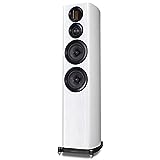 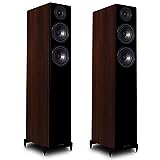 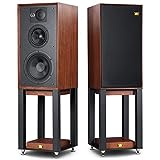 In 1932, Gilbert Briggs established Wharfedale. In his basement, Briggs created the company’s initial product, the Bronze drive unit, as a passionate music and audio aficionado. Such innovations at the time required much investigation and were regarded as cutting edge technology. His new business was named after the Wharfedale valley where he lived in Ilkley, Yorkshire.

The development of reasonably priced audiophile-grade loudspeakers is represented by the EVO4. EVO4 features many of the same innovations, tonal precision, and excellent build quality as its larger cousin at a quarter of the price. It was developed concurrently with the flagship Elysian line. EVO4 adds a level of transparency, ultra-low coloration, and detail that is only surpassed by Wharfedale’s Elysian range while maintaining the traditional British speaker sound: natural, musical, seductive, and free from listening fatigue. EVO4 offers a special chance to enjoy extremely high-end sound quality, listening sessions and style at a reasonable price tag.

The EVO4 range’s Air Motion Transformer (AMT) tweeter uses a fundamentally different method of air movement than a traditional dome tweeter. Rows of carefully positioned magnets push a big, light diaphragm across its surface. This method of moving air is not only effective, but it is also extremely accurate because the motor system closely monitors the diaphragm at all times. A wideband transducer that achieves low distortion and provides great musical detail without being “bright,” harsh, or tiring is the end result.

Wharfedale has created a quick, receptive, and extremely effective dome midrange to match the EVO4 AMT. The fabric dome is vented into a sizable, particularly formed rear chamber after being dampened with a plasticizer coating in order to disperse and absorb energy that would otherwise reflect through the front surface of the dome, out of phase and with distortion. This driver provides significantly better detail, less distortion, and less coloration by absorbing and spreading the rear energy. This is the Best Wharfedale Speakers in 2022.

In the lengthy history of Wharfedale loudspeakers, the LINTON type stands as one of the most recognizable. A model with a lineage dating back to 1965 that represented Wharfedale’s groundbreaking research throughout the 1960s, 1970s, and 1980s, LINTON has always been produced in accordance with the Wharfedale values of quality and value for money. The new Wharfedale LINTON further exemplifies these two rules by combining excellent craftsmanship, natural sound quality, and affordability in a nicely proportioned loudspeaker that has sold millions of units worldwide in all of its iterations.

The new Wharfedale LINTON upholds the original’s reputation for having a warm, rich, and genuine sounding character while also giving it an open, detailed performance that will inspire you to revisit your entire music library.

Since 1982, the Diamond line of loudspeakers have been recognized as outstanding values for the money, with performance that rivals speakers costing two to three times as much. The most recent Diamond 12 series raises the standard for inexpensive, high-performance loudspeakers by incorporating technology not often found at these price class.

Over the years, diamonds have experienced constant improvement. Technology including internally braced multi-layer cabinets, ribbed KlarityTM midrange cones, and air-core crossover inductors, which are not generally available at these costs, are included in the most recent Diamond 12 range. The standard for reasonably priced, high-performance loudspeakers is raised by the Diamond 12 series. Polypropylene cones with Klarity mica infusion and moulded radial ribs, which improve rigidity and lessen flexing, are used in the new Diamond series woofers. The outcome is a thin cone with great stiffness, minimal coloration, and blazingly quick response. The woofer voice coil is wound on a high-power epoxy/glass fiber bobbin, which is relatively uncommon in speakers at this price point and has greater stiffness than the Kapton type often used in this price range. This bobbin can handle more power than an aluminum bobbin.

The construction of Diamond 12 makes use of the woofer’s rear radiation by venting it through a crucially placed port in the back. Numerous listening tests and computer simulations were used to identify the best port layout for the enclosure’s interior volume and woofer performance. Voices and instruments are completely natural, clear, and distortion-free thanks to Klarity technology. The prolonged, focused, and forceful bass of DIAMOND 12 gets to to the heart of the music. The 25mm dome delivers open and smoothly extended high frequencies thanks to its woven polyester film construction and high-loss dampening coating. In order to minimize compression and reduce distortion at high volume levels, the magnet system has been optimized.

Low coloration and wide dispersion are guaranteed by the front plate’s flatness and the absence of any exposed screw heads or other diffraction-inducing impediments. Diamond 12s deliver a big, solid, and immersive soundstage that will immerse you in the music. Go somewhere else by closing your eyes. This is the Best Wharfedale Floor standing Speakers in 2022. 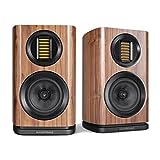 The cutting-edge Wharfedale Slot Loaded Profiled Port (SLPP) mechanism is used in EVO4 versions. The woofer’s rear radiation is vented into the room, just like in all previous bass port designs, rather than being wasted. But the similarities stop there.

There is a lot of pressure on the bass energy inside the container. Air turbulence happens in typical port designs when the bass waves depart suddenly into the low-pressure chamber. This turbulence wastes bass and frequently produces intrusive “chuffing” or popping noises, also known as port noise.

To linearize airflow via the port tube in the SLPP system, both ends have been flared with semi-parabolic flanges. In order to balance the speaker’s high internal pressure with the low pressure in the room, the low-frequency energy is subsequently evacuated to a slot in the speaker’s base. As a result, the basic notes of bass instruments are recreated completely naturally and are delivered with authority and articulation, free of port-related distortion and noise. This is the Best Wharfedale Bookshelf Speakers in 2022. 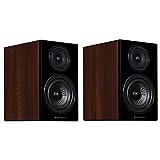 Fantastic bookshelf speakers from a reputable British company. These speakers are really well made, and their placement with the tweeters at ear level works to their advantage. Instead of being overly harsh like some speakers in this price range may be, the sound presentation had real depth and staging.

Carefully crafted magnet assembly with an aluminum compensating ring to lessen the impact of inductance fluctuations when the voice coil moves. This helps to prevent the “motor system” from producing distortion or intermodulation. In speakers at this price point, the voice coil is coiled on a high-power epoxy/glass fiber bobbin, which is quite uncommon. In addition to carrying more power than an aluminum bobbin and being significantly stiffer than the Kapton kind often found in this price range, this has the advantage of not introducing eddy currents.

A high-loss coating and woven polyester film are used to create the 25mm dome, which delivers open and smoothly extended high frequencies. Wide dispersion and uncompressed behavior have been optimized for the magnet system and the front plate. Only a very small duct on the front plate balances the acoustic load and improves the SPL (sound pressure level) measurement; the front plate is flat and exposes the dome as much as possible.

The acoustic LKR 24dB topology is used for the crossover network. This includes air core inductors, which were chosen because they have the lowest distortion of all inductor kinds and are more frequently seen in high-end speakers. The magnetic structure of the mid/bass driver has been altered to account for the coil’s increased resistance compared to a typical laminated steel or ferrite core inductor, producing rapid, clear bass with no inductor distortion.

To achieve the best cabinet resonance reduction, Intelligent Spot Bracing joins the opposing walls inside the cabinet using a particular type of wood brace. These braces, which outperform the standard “figure of eight” brace, which may just transfer resonance from one wall to another, are precisely modelled by computer simulation.