The size of the instrument and its neck is one of the major problems that beginners, especially younger ones, encounter. Learning to play on a full-sized electric or acoustic guitar can be challenging, while it’s not impossible.

What then is the answer? There are many shorter scale guitars on the market, which is fortunate for all electric guitar enthusiasts. If you’re unfamiliar, the scale length, also known simply as “scale,” is the distance between a guitar’s nut and bridge, providing a fully usable length for every string.

They are slightly smaller than full-size guitars, short scale guitars are more comfortable to play. However, it’s not only about comfort; their size also carries a completely distinct tone. In this buyer’s guide, we examine the top options. If you’re an adult with little hands or you’re looking for a guitar for a youngster, a short scale guitar will be more comfortable for you to play because of its reduced scale length. Even though the difference is only a few millimetres, it has a significant impact on playability.

Fender aimed to create a little guitar for their student series when they unveiled the Fender Mustang in 1964. Three decades later, indie rockers Buzz Osborne and Damon Albarn as well as grunge musicians like Mark Arm and Kurt Cobain have adopted the small scale guitar. In the 1990s, the Mustang gained popularity in the underground culture and turned into a fashion statement. Today, the short-scale market serves both children who find it difficult to play conventional guitars comfortably and adults looking for a workhorse. With a wide selection of 3/4 models, including Mini versions of the Jazzmaster, Jaguar, and Stratocaster as well as the Mustang and Duo-Sonic models, Fender dominates this market. The other respectable models are distributed among a few other manufacturers, including Ibanez, Jackson, and Epiphone.

The Mustang 90 added to Fender’s Offset Series. It is now a well-known garage rock staple that guitarists in groups like Sonic Youth and My Bloody Valentine have employed.

A stylish double-cutaway alder body with offset body outlines is used in its construction. Even while it may not follow the Fender look, it nevertheless features the high-quality parts and construction one would expect from Fender. The Pau Ferro fretboard on the C-shaped maple neck has 22 medium jumbo frets and a modest 9.5-inch fingerboard radius. Right below the faux bone nut, the slinky neck measures 1.65 inches. A definite sign that playing barre chords won’t be a problem for little hands. Two P90 pickups are the focal point of the unusual circuitry. Tone, volume, and a pickup selector are the three knobs that make up the EQ panel.

The Mustang has some shocking news for you if you thought a Fender with soap bars couldn’t sound fantastic. The P90s are sometimes compared to the offspring of a bright Fender single-coil and a hefty Les Paul humbucker. They are known for their meaty low end and love of distortion and fuzz. Even though the bridge position offers lots of “Fender twang,” the clean tones also emphasise the midrange.

The most acclaimed short-scale available is the Fender Mustang 90. In spite of the fact that it could pass for another “kids” guitar if the price isn’t an issue, it is dynamic in both appearance and tone. The fact that Kurt Cobain possessed several of these is a bonus, and the build quality, playability, and tone carry the Fender legacy. This is the Best Short Scale Electric Guitar in 2023.

The Fender Player Series has a lot to offer despite not being built in the USA. The Duo-Sonic guitar is one of the simplest options if you require something straightforward, short scaled, and of excellent quality. We have two specifically created single-coil pickups, a 3-way switch, two normal knobs for volume and tone, and a body shape like that of a Jaguar from 1956. 22 medium-jumbo frets, a scale length of 24 inches, and an all-maple neck are further features of the instrument.

The alder body and neck are connected with a bolt. Along with other characteristics, the traditional Fender heel gives this guitar the same feel as any Fender guitar built in the USA. It’s also important to note that the guitar is available with a few different finish options, some of which feature Pau Ferro fretboards. Given that many Fender players have particular preferences for fretboards, having this option is really intriguing.

The fixed 6-saddle Fender bridge adds to the guitar’s overall simplicity. The Duo-Sonic guitar isn’t very difficult, despite the fact that it can play a variety of genres. This setup, which has two single-coil pickups and a body that resembles a Jaguar, is quite intriguing. It’s an intriguing guitar with a wonderful balance of aesthetic and practical characteristics.

Typically, Duo-Sonic is linked to genres like alternative rock, punk, pop-punk, and others. However, for jazz or blues, or even some heavy rock when necessary, I’d definitely choose this one. The guitar’s retro vibe is completed by a 9.5-inch fretboard radius, which is the same as the one on any standard Strat, in addition to the pickups and the design. A range of players, even those who are accustomed to playing full-sized guitars, can utilise it because the 24-inch scale length is also exactly on the edge of small-sized guitars.

Actually, Oscar Schmidt is a very old business, having been established in the latter half of the 19th century. What’s especially intriguing is that German luthier Oscar Schmidt concentrated on creating items that were simple to use and approachable for beginners. And even with their OS-30 electric guitar, the business is still doing it today.

This miniature guitar from Oscar Schmidt is interesting to look at because it is based on the Stratocaster, the king of electric blues guitars. A regular fulcrum tremolo bridge and a five-way pickup selector give this little six-string guitar a few more features. It is a 34 size double-cutaway model. Because of its small size and light weight (approximately 5 lbs), it is a great choice for children’s first electric toys or for travelling and busking.

The OS-30 is essentially a more affordable and compact version of their OS-300 product. We’re looking at a vintage, inexpensive Stratocaster with a few unique features. Additionally, a 34-size is included, bringing the scale length down to 22.5 inches. This guitar has a 6-in-line headstock and a reasonably comfy maple neck. A 5-way pickup selection switch and three good single-coil pickups are among the fairly conventional features for a Strat clone. We only have one tone and volume control, which is the only difference. Additionally, it has a tremolo bridge with six distinct string saddles that is roughly comparable to those found on Squier guitars.

Overall, what we have here is a really straightforward but effective tool. Five distinct pickup configurations that resemble a standard Fender Strat. With this approach, you can pretty much cover every genre. With a scale length of about 22.5 inches, it also feels rather nice in your hands. This is one of the ideal guitars for younger beginners, in my opinion. It’s a fantastic method to learn about electric guitars and their possibilities. This is the Best Short Scale Electric Guitar for Beginners in 2023. 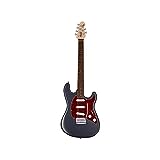 Although the outstanding bass guitars made by Music Man and Sterling (its subsidiary “cheap brand”) are their most well-known products. Their JP, Majesty, Albert Lee, Valentine, and Cutlass Series guitars are outstanding. A respectable short-scale model with a strat-styled guitar and a 24-inch scale length is available in the Cutlass line.

The double-cutaway poplar body of the Cutlass Short Scale has the recognisable 4+2 MM headstock design. It also has a fingerboard made of laurel and a maple neck. It is suitable for children and simple to play for adults thanks to its slim neck, short scale, and closely spaced frets. It also has a tremolo arm, which is unique among models priced around $300. The guitar’s pickups are its main selling point. You may get clarity and smoothness with the HS pickup configuration without losing warmth and richness. The guitar has a strong, resonant, and balanced sound. Overall, for a budget model, it provides a lot of tonal diversity.

The guitar has a flawless polish despite being built in Indonesia, and there are no obvious defects in the build or finish. You must, however, deal with the two hues, shell pink and mint green. Both variants feature distinct fretboards, but we’ve only included the pink one because it has a poplar/laurel combination rather than the green one’s alder/rosewood combination.

The Cutlass short-scale guitar is in the middle of the price-to-value spectrum, between stalwarts like the Mustang P90 and Duo-Sonic and more affordable variants like the Mini-Strat. It is less expensive than the luxury short-scale guitars and has unquestionably superior quality and tone than the former. Because of this, it is perfect for college students with a few extra dollars to spend or for those who want to try out the 24-inch scale without spending too much money.

Here’s something extremely adorable that is also really helpful. It’s commonly known that learning the guitar can be challenging for those just starting out, particularly under the age of 10. What should younger children do when learning to play the guitar when an 8-year-old can do so? They shouldn’t give up on their dreams, according to Loog. These amazing 3-string electric and acoustic guitars have been produced by the manufacturer for a long time. These electric guitars are entirely functioning and compatible with all common amps and effects.

With a scale length of about 15.4 inches, the instrument we are using is fairly diminutive. But what makes this guitar unique is that it not only has a single-coil pickup in the shape of a “lipstick,” but also an integrated amplifier. Even though the power is only a few watts at most, it’s still a fantastic way to practise. However, you continue to receive a consistent output from it. Additional controls include volume and gain, with the latter adding considerable distortion to the integrated amplifier.

It is clear that children ages 3 and up are the primary market for Loog Mini electric guitars. But playing this instrument is a lot of joy. It’s undoubtedly a good option if you need a guitar for a very young beginner. But it’s also entertaining for adults who want to play about on a little guitar.

It feels great and can be intonated like any other electric guitar, despite being primarily intended as a toy instrument. Like with any other instrument with a pickup, you can achieve a typical electric guitar tone by plugging it into a standard amp. I got a couple opportunities to play this guitar. Unbelievably, I was astonished each and every time. It can also be made into a really enjoyable instrument by using bottom E, A, and D strings, tuning it down, and playing some metal riffs. What they accomplished with it is very amazing.