Here’s the deal to clear up any misunderstandings: hybrid guitars aim to combine the best features of both acoustic and electric guitars into a single practical instrument. Why then would you require such a thing?

Consider that while performing, a number of the songs on your set list call for the use of both an acoustic and an electric guitar at certain points in the song. Although it would be tacky, you could play the acoustic bits on the electric. Let’s also just note that trying to play an acoustic over a Marshall that is turned up loudly is probably not the best idea either. Although there doesn’t seem to be a particularly good solution, you must take action, right?

But it can be a little difficult, as with most things. The feature sets of various hybrid models vary, and on top of that, some are quite remarkable while others aren’t really worth your time. Undoubtedly, it might be a challenging endeavour.

This is the first model the firm has created that features an acoustic with a soundhole drilled into the body in addition to several others that bear the Acoustasonic logo. Featuring a mahogany body with an open-pore polyurethane finish that nevertheless has a wood-like flavour and feel, and the well-known Telecaster body form. Sitka spruce is used for the top, which comes in a variety of print finishes, including union jacks.

The mahogany neck measures 25.5 inches in length, and a pair of Fender 860CL Phosphor Bronze Dura-tone coated strings are installed. A modern asymmetrical bridge with GraphTech Tusq pins and staggered Fender chrome machine-heads is part of the high-quality hardware of this acoustic guitar sound. The electronics are made up of an Acoustic Engine that was jointly created by Fender and Fishman. The instrument’s hybrid character is primarily provided by a Fender N4 noiseless magnetic pickup, a Fishman under-saddle piezo, and an internal Fishman Acoustic Body Sensor, which enhances the piezo and functions as an acoustic pickup.

By combining the pickups with the Mod-knob and the on-board 5-way switching, they may each model 10 different body types. Up to the hot, fat, and gritty with the N4, you can produce harmonically intriguing and harmonically detailed sweet, folk sounds with the piezo. Despite its smaller size, the body sensor gives the natural acoustic tone more depth, making it sound more like a conventional dreadnought.

The Fender American Acoustasonic is a high-end hybrid guitar that raises the bar for quality. Almost every genre is covered by the union of a Fender N4 pickup and a Fishman Undersaddle piezo with a body sensor, 5-way switching, and a Mod-knob that blends between them to create 10 tonal, stylistic options. delivering true Telecaster tones, a Nashville feel, and much more. This is the Best Hybrid Guitar in 2023.

It sounds wonderful, has beautiful electric tones, and you can hear the hollow body qualities coming through. But I found her acoustic tone to be unappealing. It’s not a bad sound; it’s simply not what I was anticipating. I was about to sell my T5Z when I modified it to make the instrument I currently enjoy.

A body sensor pickup that is affixed to the bottom of the top is where it gets its acoustic sound. It has an entirely distinctive tone. Already twice now, I’ve heard from people who say the sound is harpsichord-like. So, yes, the acoustic side of this guitar does have a distinctive sound. There is a lot of support for the T5 in its current form, but I’m sure there are others like me who get the Taylor T5 online in the hopes that it will sound like their acoustic guitar. It’s not even close, so pay attention to the acoustic tone in videos before you buy or hear it live before deciding whether or not it’s for you.

If you’re prepared to make a few small adjustments to your T5, this guitar can sound fantastic. On my T5Z, I installed a Fishman’s Matrix Infinity under-saddle transducer, and it is now able to record the sound of a plugged-in acoustic guitar. unlocking the potential of Taylor T5 and T5Z requires some work, but it is completely worthwhile. On the Matrix, there is a bass boost switch that will thicken the sound on thin body guitars. For the best tone, I advise turning it on.

Conventional appearances and upscale performance. High-end electronics are combined with premium woods in this Telecaster-style hybrid to produce a tone with a superb humbucker growl from the electromagnetic pickups and acoustic warmth from the saddle-mounted piezo. The Michael Kelly Hybrid 55 is a sonic-flexible gig guitar with gorgeous tonewoods and upscale features. The c-shaped, bolt-on maple neck has a compound radius of 10.5 to 16 inches. The 25.5-inch length has 22 jumbo frets, a rosewood fingerboard, and a single-cutaway body style that makes it simple to scale.

The body is made of korina, a type of ash, is lightweight, and features elegant telecaster curves embellished with a beautiful tigers-eye burst pattern. Similar to the original Michael Kelly 55 series pickup set. Using a Rockfield SWC Humbucker and a Rockfield Mini Humbucker in tandem (bridge). With the help of the push/pull volume and tone pots on the control plate, it now has some rowdier, beefier sounds that can be customised.

The hybrid acoustic device is a Fishman Power-bridge with integrated saddle pickups. They can be used alone or combined with hotter humbuckers to produce classic, natural acoustic, spanky, and custom hybrid tones. You may customise your acoustic tones with the powerbridge’s three-position toggle switch and independent, dedicated master volume, both of which are located on the upper bass bout. With the addition of a Great 8 mod, which allows you to instantly split the twin humbucker signal in half for single-coil tone, you have a very adaptable tool at your disposal.

The Michael Kelly Hybrid 55 is among the best thanks to its Tele-style shape, lovely tigers-eye burst pattern, and electrical array that offers the greatest flexibility. The small and SWC Rockfield humbuckers give it a more boisterous edge, while the Fishman powerbridge gives it an accurate acoustic replication. More sonic options are added when you quickly move from a double-coil pick-up pattern to a single-coil design. The pricing is a deal considering the sound variety offered and the excellent workmanship. This is the Best Hybrid Guitars in 2023.

A highly portable hybrid for travelling guitarists. This hybrid guitar is one of a kind and was created for travelling. It is highly portable, has a headless design, a full scale length, and even comes with a stethoscope headset for silent practise without the need for electricity. The Pro series by Traveler raises the bar for travel guitars with its bold, unconventional appearance. Traveler has eliminated nearly all of a large solid body’s components in favour of a one-piece, neck-through body and a removable lap-rest. There is no doubting its portability because they also use an in-body tuning system, but how does it stack up against full-sized, conventionally-shaped hybrids?

This small ax’s fingerboard is made of ebony, and the neck measures 24.3/4 inches in length, therefore fret availability is unaffected. The hybrid formula consists of a specially created piezo bridge pick-up that can be combined with a low profile dual-rail humbucker. Of course, each component may be isolated and utilised alone. Since it only supports 3-way switching, it doesn’t have as many features as some expensive versions, but given that this little terror costs half as much, that is to be anticipated.

Because of its sound shaping capabilities, it is more useful than a typical electro-acoustic for travelling light and playing a wider range of musical styles. You can switch between more mellow strums with a lovely resonance, country-style twangs, and old-school rock tones with thicker fuzz or a wail. With the piezo settings, the higher frets really sing, and the humbucker has a lot of thrust.

With its special internal resonance system and battery-free stethophone headset, the instrument itself can be used for silent practising without the need for an amplifier.

The Traveler Pro-Series Deluxe is unquestionably an outstanding hybrid electro-acoustic guitar, even if you’re not on the road. It features a variety of tones to choose from, and the piezo has excellent resonance and harmonics. The dual rail humbucker is gritty, muddled, and mixed, and it is quite entertaining. But if travelling isn’t in the cards, you might want to choose another option since the Pro Series Deluxe’s standout feature is actually its cutting-edge style. 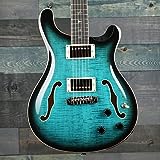 This SE Hollowbody Piezo is proof positive that PRS has always produced unique products. You have PRS humbucking pickups and an LR Baggs piezo, which you can combine or isolate completely to create a wide variety of tones that aren’t achievable with a basic electric or a standard acoustic. The final eye-catching hybrid we are keeping an eye on is a little more affordable PRS SE Hollowbody in stunning peacock blue. It is a glossy attractive guitar with a sturdy 5-ply laminated maple top, angled mahogany sides, and conspicuous f-holes. Don’t be turned off by the fact that it is from the imported SE series rather than being made in Maryland because the build quality is excellent. Everything is in perfect condition, from the woodwork and hardware to the mounting of the electronics beneath the hood.

The hollow body shape allows the sound waves somewhere to bounce around before the piezo magnets capture them, giving the acoustic resonance a good depth. The piezo, a specially created invention by PRS and LR Baggs, addresses the instrument’s inherent acoustics and has a small profile. There are two potent, vintage-inspired PRS 58/15 “S” humbuckers that you can use.

With the Mag volume set to zero, you get an acoustically fast and clean sound. The mix/piezo output has two volume settings that let you modify the mixture of both. You may gradually mix the two together in either way to get some fantastic expressive and rich sounds. When you merely want to shred, you can use the separate output with the name “Mag,” which skips the piezo. For flexible stage use, the outputs can be routed to separate amplifiers, turning the mix/piezo signal into a piezo-only signal.

The PRS SE Hollow body features the brand’s wider-style neck, 22 frets, and an ebony fingerboard with a 10-inch radius that is smooth and allows for quicker fingerwork. Good balance, no diving on you, and excellent playability are all present. The mahogany set neck is covered in abalone “old-school” birds the entire way around. Consider the PRS SE Hollowbody, a stunning hybrid guitar. The PRS/LR Baggs piezo and 58/15 “S” humbuckers offer a wide variety of tones that are quite adaptable. This fact is multiplied tenfold by the individual outputs.
Price comparison at Sweetwater