The best dynamic microphones are reliable, restricted in their response, and typically relatively affordable. Condenser microphones, in comparison, are delicate, extremely responsive, and frequently expensive—sometimes ruinously so. We don’t want for this to give the dynamic mic a bad reputation. When a sound source is extremely loud, has undesired background noise, or originates in physically demanding environments like the stage at an outdoor festival, a dynamic microphone is an unmatched option. The fact that dynamic microphones are less transparent than condensers may seem like another drawback, yet this trait can actually be very useful in creative applications.

The SM7B has a very flat frequency response on basic settings from roughly 100Hz to 12kHz, building up gradually from the bass end but sharply dropping off from the high end. When attempting to get the finest performance out of your vocalist or instrument, having these convenient alternatives is helpful. Just flick a few switches on the back of the mic to suddenly hear much more bass roll-off or a presence boost.

To reduce hum from neighboring computer equipment, the SM7B’s design includes an electromagnetic shield, pop filter, and inbuilt shock mount. It is also well-known for producing excellent sound in untreated environments by extremely successfully eliminating noise and reflections. These characteristics have given it a new lease on life as the preferred mic among podcasters and YouTubers in recent years.

Since they first entered production in the 1970s, Shure’s SM7 microphones have proved outstanding for vocal recording. Yes, Joe Rogan uses an SM7B for his podcast, and Michael Jackson preferred the original SM7 as his go-to microphone.

The SM7B, the most recent version of the well-liked vocal microphone, has controls for bass roll-off and presence boost in addition to a built-in wind screen to block plosives. This is a low-sensitivity microphone, similar to the RE20, so you’ll probably need a mic booster like the Cloudlifter to reach a usable recording level. This is the Best Dynamic Microphone for Podcasting in 2023. 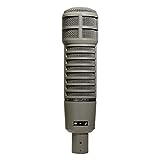 The RE20, a broadcasting workhorse, is still widely used today in the podcasting community. This microphone excels in the field of recording vocals because to its outstanding off-axis rejection and natural, full-bodied sound. Its so-called Variable-D technology, which includes ports down the length of the chassis to lessen the tone shift brought on by proximity effect, is partially to blame for this.

Since of the proximity effect, close-micping is popular among broadcasters because it gives their voice a warm, rich quality. However, there is an issue. Additionally, a lot of broadcasters enjoy fidgeting, turning their heads, moving about, and generally forgetting to keep their lips as close to the microphone as feasible. Their performance substantially alters as a result of this tinkering. One moment it’s warm and rich, the next it’s frail and whining.

The RE20 is a fantastic, professional-grade dynamic mic with a secret weapon called Variable-D. In essence, a perforated pipe on the back of the RE20’s diaphragm maintains a constant frequency response whether the source is on-axis or up to 180° off-axis. This gives a vocalist the freedom to roam about, whether on purpose or not, without having an impact on their sound. The crisp low-end that Variable-D microphones produce makes them ideal for recording kick drums, guitar cabs, and other low-frequency instruments as an extra bonus.

If you want to create broadcasts or podcasts of a high caliber that your listeners will enjoy, the RE20 is a wise investment. It represents much better value if you can use recording instruments with it as well. Keep in mind that the RE20 requires a good amount of amplification because it is a low-sensitivity microphone if you’re thinking about buying one. You should purchase a Cloudlifter, a low-noise mic booster that offers 25dB of clean amplification, if your signals are weak. 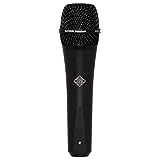 The M80 is an intriguing microphone for a lot of reasons, not the least of which is that it comes in no less than 15 colors, including fluro pink, yellow, orange, and gold. To properly coordinate the M80 with every costume in your stage wardrobe, you can even mix and match the color of the body and grille. We’d pay to watch that performance!

However, how does that sound? In order to create a microphone with the durability of a dynamic and the acoustic qualities of a condenser, Telefunken has put a lot of effort into the project. The M80 has a wide frequency response that benefits from a hint of high-end presence thanks to a light capsule and thin diaphragm.

The outcome is an open, breezy, but commanding persona. a wise choice for snare and lead vocal applications. Transients are finely controlled, and handling noise is nicely muted despite the high-end prominence. The build quality is excellent. The M80 weighs 430g, which is approximately a third more than a Shure SM57, making it reassuringly weighty even though it isn’t particularly heavy. Its smooth, svelte contours have a fairly opulent appearance in black and chrome. 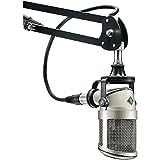 If you’ve ever been curious about how a Neumann microphone would affect the sound of an electric guitar, bass, or kick drum in recordings but were hesitant to place an extremely expensive condenser mic in front of an amp or kick, your curiosity is over. Neumann has developed the BCM 705, the first-ever Neumann dynamic microphone, for the first time in their 75-year reign at the pinnacle of the recording industry. The dynamic BCM 705, which is far less expensive than the condenser BCM 104, will solve the issue of the immense cost pressure associated with outfitting a studio with many mics. The Neumann BCM 705, which is also a fantastic broadcast microphone, can perform speech tasks around the studio.

The portable stage microphone and capsule for the Profi Power Sennheiser MD 431 are used by the BCM 705 thanks to a Neumann revision. The BCM 705, which shares the same housing as the previously released BCM 104, can be easily distinguished as a Neumann dynamic microphone thanks to its new “green” Neumann emblem. The production procedures for the capsule of the original MD 431 needed to be extensively revised for the BCM 705 project. To achieve the application requirements for this novel microphone, tolerances in frequency response and sensitivity had to be reduced.

In the BCM 705, the entire chamber enclosing the capsule has been extended and is acoustically connected to a rear entrance port to boost low frequencies. Even though the BCM 705 is designed for near miking, the proximity effect results in comparatively little low-frequency build-up. Because of this, the microphone is a great option for anyone who wants to keep a decent, firm bass response while working a little bit farther away from the source.