Vibrato is a pitch-based effect that can be used to give an audio stream more character, color, and emotion during music production. Vibrato has been employed in a variety of musical genres. It’s caused by the pitch of a prolonged note or sample warping or fluctuating.

A Vibrato VST is a pitch-based effect that causes an audio track’s pitch to steadily rise and fall. It’s not like a Tremolo, which has a constant increase and fall in volume. A Vibrato VST can give an audio stream more color, character, and expression. It’s similar to a Guitar whammy bar, which is incorrectly referred to as a Tremolo Bar. A whammy bar, on the other hand, is used to create vibrato to sustained notes by distorting and altering their pitch.

Vibrato is utilized in a variety of music genres, including rock and metal, and can be used on samples, guitar tracks, synths, and more. We’ve compiled a list of some of the best vibrato VSTs for audio production. Let’s get started without further ado. 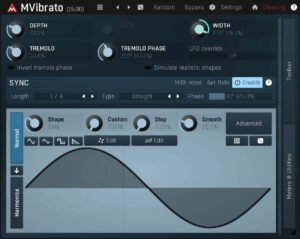 Melda Production MVibratoMB vibrato emulator is highly adaptable. The user interface is totally adjustable, with the ability to modify the shape of all windows and the color schemes of every component of the interface to make it easier on the eyes when using it. In addition, there are two user modes to choose from sound effects.

The in-depth interface of Vibrato allows you to generate pitch modulation amount that you wouldn’t be able to achieve in your audio quality with analog gear. In modern sound design situations, such as film or game score, features like the step-sequencer and custom shape editor come in handy. You can access a basic interface and essential vibrato parameters, such as effective rate and depth of modulation algorithm, by selecting an easy mode. You can also choose the expanded mode, which gives you access to a bewildering array of control settings.

With the Multiband Vibrato, you may apply your vibrato parameters to up to 6 distinct bands for some interesting tonal dynamics. Each is completely customizable and uses three crossover algorithms to assist avoid frequency clashes during processing. You can also configure peaks and limits for each individual band as well as the plugin’s main output.

The Multiband includes an LFO editor that allows users to create bespoke vibrato LFO patterns. You can assemble together sophisticated oscillation sequences using the editor’s sketch mode and a collection of preset slopes and curves.

The multiband processing capabilities of the MMultiband Vibrato are its most valuable feature. Different regions of your signal’s frequency range can be modulated independently by LFOs. For example, you may apply harsh, jagged modulation to the sub-bass region of your sound while leaving the high end absolutely dry and unprocessed. This provides you with some unique expressional ammunition, making this plugin well worth a try. This is the Best Vibrato VST Plugin in 2022.

The Tube Modulator by Audiority has a variety of spatial and dynamic effects, including vibrato. The plugin includes a number of emulations of iconic analog effects units from the psychedelic eras of the late 1950s and early 1960s. The user interface is simple to grasp and is centered on a visually appealing X-Y scope that provides real-time feedback on signal modulations.

This plugin is based on vintage music gear from a specific era. As a result, the Tube Modulator’s sound has a vintage vibe to it, with the warmth that comes with valve amp technology. The spatial effects enhance to the retro feel of this plugin and are useful for creaming up your vibrato.

The Tube Modulator has tremolo, chorus, and uni-vibe modulation choices, as well as vibrato. Chorus-vibe and trem-vibe are two examples of combos that alter more than one component of your signal at the same time. You can use Tube Modulator to apply 11 different LFO wave forms to your vibrato. Traditional shapes such as sine and triangle waves are available, as well as more experimental shapes for more avant-garde sounds. With the easy access dials beneath this control knob, you may modify the rate and depth of the modulations.

The Tube Modulator will appeal to fans of foggy, spacy vibrato. It sounds wonderful over guitars and organs, but it can also be used softly on voices or pads that need a little extra oomph.

The Leslie Speaker, as well as the Wow and Flutter controls, will appeal to fans of lo-fi production. Producers that enjoy creating custom LFOs may find this plugin restrictive, and the lack of a quantized rate parameter may be a deterrent for some. This is the Best Vibrato Plugin in 2022. Motor is a plugin effect that employs side-chaining to combine signals in new and exciting ways: insert any two signals, and they’ll dance around each other like courting birds intoxicated on sour cherries. It can be used to gently transition between sounds or to cut them up rhythmically, influencing both volume and spatial position. Vibrato breathes life into the most mundane signals, while excessive modulation speeds ruin them in unexpected ways.

Motors, like AudioThing’s previous collaboration with Hainbach (the Soviet spy recorder turned echo, Wires), is inspired by history: “The Crystal Palace,” which was developed by Dave Young for the BBC Radiophonic Workshop. This one-of-a-kind gizmo allowed up to sixteen audio channels to be switched at different speeds. It did so in a steampunk-like manner, using a large capacitor revolving on a motor. Its effects ranged from exquisite to practically granular, which was a big accomplishment at the time. It can be heard on Brian Hodgson and Delia Derbyshire’s Doctor Who episode “The Krotons” soundtrack.

Things Motor concentrates and builds on this unique tool by allowing the sidechain combining of two signals, allowing it to work across platforms. Instead of the fixed physical waveform of the original, switching is controlled by a changing waveshape LFO. Smooth morphing or viciously chopped sounds, as well as worlds in between, are all possible. It can even be used to produce ring-modulation-like effects when audio rate modulation is applied to signals.

AudioThing included a vibrato and a panner synchronized to the “motor” LFO, as well as some of AudioThing’s typical analogue-like sound shaping, to make it a genuinely flexible tool. When combined with the variable time on the motor start/stop, you get a sound morphing rotary simulation you didn’t realize you needed until you heard it.

While the original Crystal Palace may never be heard again in public, Things Motor offers a contemporary perspective on a classic tool. One of Hainbach’s main interests on his channel is bringing avant-garde techniques from the past to a modern audience, and AudioThing is glad to have partnered with him on this.

How do you get a vibrato effect?

A signal is sent via an audio crossover in an electronic circuit to create electronic vibrato. The crossover divides the sound into distinct frequency bands, which can then be stretched or manipulated using various LFO parameters. These types of circuits may be found in the basic components of most analog vibrato effects pedals and outboard gear, and they’re what most vibrato VSTs in digital music creation are modeled around.

An LFO is used to modify the speed of a signal at a steady rate to create automated vibrato. The Leslie Speaker is a well-known organ that features one of the earliest vibrato designs. Before being sent through a loudspeaker, a note played on the organ is sent into a chamber where it is exposed to a revolving baffle drum or horns. The vibrato effect is created by the signal warping consistently in the rotation chamber. Due to its rhythmic uses and appeal, this vibrato variation is the most frequent type of the effect employed in modern production.

The vibrato effect can, however, be replicated in a variety of ways. The vibrato effect was traditionally made mechanically available through the use of the whammy arm. The whammy arm was invented in the 1920s and was first utilized by electric and slide guitarists. The arm is screwed or fixed to the bridge of a guitar and is pulled or pushed to cause pitch fluctuations by briefly shifting the tension on the guitar.