One of the best instruments in the world is the Irish tin whistle. This diminutive yet famous instrument is my go-to suggestion for anyone seeking to learn traditional Irish music for the first time because it is accessible and affordable. These days, the name is a little misleading. Many ‘tin’ whistles are not actually made of tin. Other metals like brass are used in some. There are also several that are made of wood and plastic resins. Nevertheless, whether or not they are made of tin, the term “Tin Whistle” still applies.

The penny whistle, or modern tin whistle, has a history dating back to 1843. It is a mainstay of folk music, especially traditional Irish music. The Clarke Tin Whistle, which Robert Clarke invented, makes the claim to be the “original” tin whistle. However, there are other tin whistles besides the Clarke. There is a wide variety of tin whistles available, and each brand has its own distinct sound and aesthetic.

It’s simple to start out with a high-quality investment when purchasing a tin whistle. A excellent starting whistle will be far less expensive than, say, a concertina or fiddle. In the big picture, a high-quality, professional-grade whistle won’t cost you an arm and a leg either. Therefore, there are countless possibilities available to you while picking the best tin whistle.

No matter your playing level—beginner or expert—this whistle is fantastic. Despite being simple to play, it can yet be quite lively. In the correct setting, it is a tool that may create a lot of excitement. It also has a subtlety, though, that when delicately played by a skilled musician, is quite profound and moving.

It has six holes and is a typical size. It sounds like a whistle in the key of D. The most popular and often used whistle keys are C and D. There are 27 songs on the CD that showcase its powers by showcasing a range of musical genres.

The length of this brass whistle is eleven and a half inches. Playable notes cover the entire range. This is a good location to start learning music if you have never played an instrument before. Without a doubt, it won’t break the bank. a great way to get started with the woodwind family of instruments. Although this whistle is not the best available, it is a great place to start learning. It is an excellent present for both young and old because it is priced reasonably. 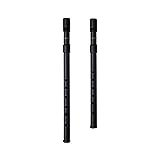 Two whistles from Woodi that provide an alternative to what is typically expected are included in this set. They are both instruments with six holes. Both are in the key of D, with one being in the key of C. They are 11.5 inches and 13 inches long, respectively. The D key is used for the shorter (11.5 inch) whistle. These are composed of ABS resin plastic rather than metal, which makes them essentially unbreakable and incredibly durable. They have also been given a darkened finish that resembles wood to give them a little bit of vintage flair.

Before the tin or penny whistle was created in Manchester, England, in 1843, what material was used? The majority of these instruments were constructed from wood or other readily accessible materials. Traditional materials like tin or metal are still used by many industries today, nevertheless.

In addition to strength and lifespan, ABS resin plastic can also offer additional benefits. The notes frequently have a more even resonance and are crisper. Metal can occasionally produce some odd note changes. Purists will claim that this is what makes the instrument special. They do have a point, though. But this is a fantastic choice for someone who is still learning the instrument. Although it might not feel or sound precisely the same, it is still a fantastic place to start.

They do include a few customary additions. They have a two-piece construction so the mouthpiece may be adjusted to help with tuning. They can be put in the dishwasher, according to remarks from the manufacturer. Most likely, we wouldn’t try that. Dishwashers are popular, and after all, they are made of plastic. Plastic and heat typically don’t mix well. A good entry-level instrument with a very appealing price for two whistles.

Joseph Clarke, who is credited with creating the first tin whistles, has his name attached to this whistle. That might be one of the factors contributing to their whistles’ reputation as some of the greatest in the world. This whistle is simple to use and produces an exceptionally clear and sharp sound. This whistle has a valuable feature. A sound with significant volume can be produced using relatively little air. Its degree of playability is appropriate for both beginning musicians and more experienced ones.

A whistle with a lengthy history that has been produced in England since 1843. By both appearance and sound, it stands out among other novice whistle options. It has a wooden stopper in place of a mouthpiece and a tin conical (tapered) bore. Some people might love it and some people might not, but this wood component makes it possibly the most breathy and husky whistle. Additionally, Clarke provides its Celtic tin whistle model, which is considerably more comparable to other entry-level options and is constructed from a tin tube and standard plastic mouthpiece.

The length of this whistle is twelve inches, and it is tuned in the key of D. It is made of tin, with a mouthpiece made of black plastic, and has the customary six holes on top. The whistle’s mouthpiece-to-tail transition is tapered in the design. The finger holes are made closer together by the idea of tapering the bore. As a result, playing the higher notes becomes more accurate. Being able to hide the holes is occasionally one of the most difficult aspects of achieving a good sound from a whistle. If you don’t, the whistle will start making strange noises. Covering the gaps in the high registers is made incredibly simple by this design.

The Waltons brand makes numerous excellent Irish whistle variants that are popular with both intermediate and experienced players. There are “mellow” and regular models. And many players seemed to favour the latter over the former. The brass tube of Waltons’ Irish tin whistle has a plastic mouthpiece. It has a mellow, gentle sound, as the name would imply. Additionally, compared to other starter options, it is a little bit louder thanks to a little larger bore diameter.

Waltons also sells coated variants made of aluminium in addition to brass whistles. The one with the Guinness logo in black is probably the most well-known. Or “A Little Black,” without it. Since this whistle doesn’t perform nearly as well as brass variants in terms of tone clarity and stability, it’s probably best to purchase it as a gift.

Generation whistles generally sound fairly similar to Waltons and Feadog. Even if it has a nice sound, not all Generation whistles have the same or, in some cases, even a similar sound. The difference between the two can be as great as night and day. So unless you can visit the store in person and try 10 pieces, we advise beginners to stay away from Generation D whistle. Then you might discover the one you really like.

The fact that Generations are available in a variety of keys is, nevertheless, their main benefit. That is a rare instance among beginner whistles. As a result, they became a go-to option for any key besides C and D. If you need that precise key, the Brass Bb model is extremely good, and many players recommend the Generation brand. Brass and nickel varieties of generation whistles are available. The brass models have a gentler tone, whilst the nickel models sound edgier and brighter, with the exception of the silver appearance. However, they both sound quite conventional and similar.

This whistle from Generation is in the very low price level. Although they do make a product of superior quality than this instrument, it is only a matter of price. Most likely directed at the starter. As a result, you cannot anticipate the sound to be of such great quality. It is generally alright.