It’s a bold claim, but Squier guitars are among the best available, all things considered. Even the best Squier guitars aren’t as high-quality as those built in the USA by PRS or Fender, but they nevertheless have enough power and offer such tremendous value that they should be taken very seriously.

One of the top-selling guitar brands worldwide is Squier. They joined the Fender Musical Instrument Corporation in 1965 and became a Fender subsidiary. Squier was formerly a string producer, but Fender repurposed the name when they needed a brand name to utilise for their low-cost import models. Although traditionally highly unreliable, Squier guitar quality has improved significantly in recent years. Any Squier you purchase will almost certainly be a high-end instrument with excellent tone. As time goes on, they expand the number of models in their catalogue while also improving the quality.

Squier as a company deserves a tonne of praise for the influence it has had on guitarists. It has provided guitarists with an incredibly accessible starting point for their careers since the early 1980s, and it still does so now by creating high-quality instruments that any musician can pick up and enjoy. Squier guitars are presently made in China and Indonesia, however they were once made in Japan. They can be excellent foundations for players to customise and upgrade thanks to the abundance of components and pickup options available on the market. They frequently make wonderful guitars right out of the box. To be honest, they don’t really need to be upgraded. You should be able to find what you’re looking for right off the shelf because the selection is wide enough.

However, Squier is more than simply a manufacturer of backup or entry-level guitars you can use until you can purchase a “genuine” Fender. To mention a few, its Classic Vibe, Paranormal, and Anniversary models are high-quality instruments that can withstand demanding gigging, touring, and recording schedules. In our opinion, some of these models sound better than their US counterparts.

There are several great Stratocasters in the Squier catalogue at all price points like the squier contemporary stratocaster hh, but none quite hit the mark like the Classic Vibe ’50s Strat. We can’t think of anything better as a contemporary homage to the original guitar.

Squier Classic Vibe starcaster guitar line never ceases to astound us with its high level of craftsmanship, aesthetic appeal, and overall feel. These details, combined with elements like the 2-color burst and Narrow Tall frets, give the CV ’50s Strat a fantastic vintage vibe and aesthetic. The guitar’s body is built of Pine, a material we haven’t seen since Fender’s early days.

The pickups also contribute to this by providing the brightness, bite, and top-end that you would expect from a Strat, as well as some rich mid- and low-end warmth. The Strat is one of the most adaptable guitars out there, and this Classic Vibe ’50s is no exception. It has three single-coils with five distinct options. The CV Strat will perform all the functions you need from a guitar, whether you’re a beginning player or an enthusiastic intermediate. It may even pass muster at some more upscale gigs. This is the Best Squier Guitar in 2023.

The Jaguar is a guitar that can play everything, from surf rock to grunge. This guitar has so many tone options that it might end up being the only one you ever need. It has beautiful offset aesthetics and comes with high-end accessories like alnico pickups and a real bone nut because it is a member of the Classic Vibe Series.

Jaguar is another Fender guitar that went on to become a recognised piece of popular culture. Despite not being Kurt Cobain’s sole guitar, this model is currently the one that is most strongly associated with him because it was most famously played by him during the Nevermind period. You may now purchase your very own Squier Classic Vibe ’70s Jaguar for a fraction of the cost.

We were happy to test Surf Green, our preferred finish. Although the Black and Sunburst choices are stunning on their own sound quality, the Green and Tortoiseshell pickguard combination has such a classic appearance. With the high calibre of the finish on this Jag, Squier really outdid themselves. The neck had a C shape, just like all of the test guitars, which by this stage we were accustomed to. Fortunately, the Jag’s neck featured the same premium finish as the Jazzmaster’s 40th Anniversary, making it a complete delight to play.

We thought this Jaguar’s pickups were really strong. They were alnico single coils that Fender designed, and they excelled in practically every metric. We wished that these Squiers had been around in the ’90s because they provided us crisp, clear cleans and nasty, grimy, raucous grunge tones when we wanted to break up. The Jaguar’s trem system, notably the arm, was our only significant complaint. The tremolo arm on Jags and Jazzmasters slots in rather than being screwed in like it does on Strats. On the Squier, we discovered that it came out considerably too quickly, making practical use challenging.

Among all the Squier models, the Classic Vibe ’70s Jaguar has to be one of the nicest looks. It generates powerful tones in just about any musical style and has a classic Fender feel and playability. This is the Best Squier Jaguar Guitar in 2023.

Given that we’re looking at Squier guitars, you might be wondering why this pick isn’t a solid-body instrument. Semi-hollow guitars are among the most underappreciated Fender and Squier electric instruments; in our opinion, the Thinline Telecaster is the most misunderstood guitar in the Squier product line.

Aside from the body’s large empty space, the Thinline Tele has that unique quality that makes it stand out from the competition. The tone still has hints of the vintage Tele vibe, or the “twang,” but the guitar’s semi-hollowness and the two wide-range humbuckers add something entirely new to the mix. These are some of the best electric guitar pickups that are currently available for any guitar, in our view. The guitar’s tones are deep, open, and expansive, just what you’d expect from a semi-hollow instrument, yet the humbuckers, in contrast to other pickups, offer surprising clarity. No compressed, fuzzy sounds that you would often associate with a pair of inexpensive humbucking pickups.

There are plenty of opportunities to bring home something unusual that will blow your mind. The Sunburst and Natural finishes are both lovely, with a really nice grain showing through on both occasions. There’s also an Olympic white ‘FSR’ model that’s around for a short while. At greater volumes, there will be a little bit more feedback than usual, but not enough to seriously disrupt a performance or practise session. This is the Best Squier Telecaster Guitar in 2023. 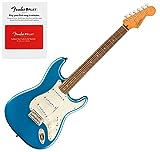 The Squier Classic Vibe ’60s Stratocaster is located in the midst of Squier’s lineup of Classic Vibe Strats, which also includes models from the ’50s and ’70s. Unlike the other models we evaluated for this collection, the body of this 1960s Strat was constructed from nato, a substitute for mahogany. Thankfully, it didn’t significantly affect weight because the CV topped the scales at little under 8lb.

We really liked the sweet apple red paint on our test vehicle. The paintwork was expertly applied and has a deep gloss. The neck was made of maple and had a wonderful antique tinge that complemented the red paint job superbly. Indian laurel covered the fretboard around the front. Indian Laurel has a hit-or-miss history in our experience, and sadly in this instance it was lacking moisture and appeared washed out, especially when compared to the Jazzmaster and the Jaguar. As we frequently mention, this is a simple remedy that just requires a few drops of lemon oil, but we would expect that it would be carried out before the instrument leaves the manufacturer. Fortunately, the rest of the neck—especially the frets—was nicely finished.

It was a vintage-style guitar with the typical SSS setup and high-quality alnico V pickups, like those used in Fender Player Series Stratocasters. It had a notably warmer tone in all positions since the alnico magnets weren’t quite as hot as those on the Affinity HSS Strat. It still had a tonne of chime and quack and all the Stratocaster flavour you could ever want, despite the heat.

It was enjoyable to play the Squier Classic Vibe ’60s Stratocaster, which, if it hadn’t had a dry fretboard, may have been a contender for Editor’s Choice. Though it sounded surprisingly similar to the much more expensive Player Strat, it nevertheless delivered on the iconic Strat tone that players are searching for, making it a fantastic option for working guitarists on a budget. This is the Best Squier Stratocaster Guitar in 2023.

The first student-grade Fender guitar, stripped down and ready to rock. This guitar is for you if you want a good-looking Squier with terrific tone and loads of attitude without spending a lot of money. It’s one of the line’s more cheap models, and sure, it maintains the level of quality that customers have come to expect from the company. Fender’s punk classic is available for less money as the Squier Bullet Mustang. You may possess a piece of the original’s enormous popularity during the punk movement because to its asymmetrical design and hard-hitting pickups.

It shared a C-profile neck with our top pick, the Affinity Stratocaster, which was, as we had previously discovered, chunkier than we had anticipated. Although it was a touch fuller than the typical beginner neck, it was still comfortable and did not make it difficult to reach the frets or wear me out after prolonged usage.

Considering the inexpensive price of the instrument, we discovered that the quality of the fretwork was once again superb. Any guitar must, at the very least, have smooth edges and frets without dead spots, and the Mustang met these requirements. Given that we’ve previously seen some subpar laurel fretboards, we were once again pleasantly pleased by the fact that the fretboard was constructed of Indian laurel. The humbuckers produced loud, powerful tones that were incredibly responsive and had a true dynamic range. Although they could provide us with some good clean tones, they really excelled when given a lot of gain, driving the amp into a luscious, voluminous overdrive.

The Squier Bullet Mustang HH is far more than just a beginner’s instrument. Insofar as it is a stylish, easy-to-use guitar with wonderful playability and tones, all at an incredibly low price, it captures the essence of the original.