You wouldn’t typically pair the phrases “disco” and “silent” in the same sentence. However, if you get past that idea, you’ll have a fascinating experience. A silent disco is a gathering where guests dance to music played through wireless headphones rather than loudspeakers. The idea caught on when people began to use it to reduce noise pollution and get around sound curfews in the early 1990s. But it wasn’t until 2005 that the Bonnaroo Music Festival adopted the term “silent disco” for the first time.

Have you attended any silent parties, silent discos, or other quiet events? If not, you must go. Silent disco is a concept that is neither too new nor too ancient. It’s a joyous celebration where music is played without anyone being bothered, even when they are listening to loud music. It’s a quiet musical experience, to put it another way. This idea is becoming more and more popular among partygoers, and as a result, the best disco headphones are becoming more and more commonplace at corporate parties and music festivals. The idea of a quiet disco or silent party is not going away. Additionally, investing in a nice pair of silent party headphones is essential for a successful silent disco party. 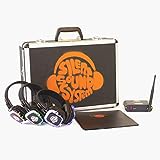 One of the pioneers of silent disco in the US is Silent Sound System. Their Starter Package includes everything you require to begin started, and their headphones have a colorful and creative appearance.

Nine RF headphones are included in the Starter Kit for the Silent Sound System. The three audio channels and level can be changed using the in-line controls that come with these headphones. They can last for up to 12 hours, which is more than enough time to party all night long. Additionally, the ear cups of the headphones have LED lights around them that alter color based on the station the user is listening to. This allows you to easily keep tabs on the music your guests are listening to throughout the evening.

These headphones’ ear pads are made of vegan leather. These pads might save you a lot of time because they are hypoallergenic and simple to clean. The headphones have a foldable design for simple storage and even include a case to keep all nine of them safe. For individuals who are just starting out in the industry, the free headphone management system is a huge asset. You can set up your event and solve common issues you could run across with the help of our printed guide. 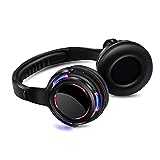 Even on a tight budget, it’s still possible to find good silent disco headphones. 20 headphones and three transmitters are included in the Factory Sell Silent Disco Headphones bundle, which costs less than $850. There are additional packages available as well, ranging from 2 to 150 headphones and several transmitters.

Signals can be received by the headphones up to 500 meters away thanks to RF technology. Additionally, they handle three channels and may run for 8 to 10 hours. In contrast to the other two options on our list, this one comes with three transmitters that can switch between battery and 9V DC operation.

These headphones include ear cups that are shaped like discs and are lined with LED lights that flash in time with the music. Depending on the channel, the same lights can also alter. The on-ear buttons for power, channel switching, and volume are also swivelable in two directions on the ear cups.

The headphones are made of plastic and are relatively thin, which raises questions about their endurance. After some time, components of the headphones, such as the buttons and the volume dial, may also become loose. However, the headphones’ general layout and construction enable them to be both lightweight and comfy. This is the Best Headphones for Silent Disco in 2022.

Party Headphones is another well-known silent disco business that has been operating in the nation for 11 years, similar to Silent Sound System. Their Silent Dance Bundle is also one of the greatest options available if you want to get silent disco headphones.

The Party Headphones Silent Disco Bundle comes with 10 headphones that can last 10–12 hours. And while there are a few minor variances, these are fairly similar to Silent Sound System in terms of design and build quality. Both of them are folding headphones featuring a plush cushion, a side volume control, and a channel toggle. Although the arrangement and design of the LED lights are same, these have three more color selections, six, than the Silent Sound System.

The package’s transmitter only supports one audio channel, however it features a channel toggle so you can designate one transmitter as channel 1, 2, or 3. The transmitter’s ability to switch between short-range and long-range modes is another unique feature. A 200-meter radius is covered by short-range audio transmission, which uses less battery. Long-range, on the other hand, can get to more people within 500 meters.

These quiet disco headphones will have a hard time connecting to third-party devices, just like the headphones from Silent Sound System. This is due to the fact that their transmitter emits a distinct signal that is difficult to detect by equipment from other companies. 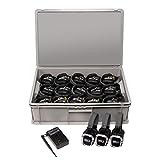 The Sound Off GLO 2 is an excellent option if you want to organize smaller gatherings and have the money to splash out on it. These comfy, high-quality noise-isolating headphones will allow your guests to listen to the music undisturbed. Additionally, they have Immersive Dynamic Bass (IDB) technology, which creates a larger bass for a fascinating experience, on Sound Off’s exclusive 40mm drivers. Your close friends and family will genuinely enjoy these elements during your private event!

The set comes with 15 RF headphones and 1 transmitter. However, for best sound quality, the transmitter may only broadcast up to 300 meters away, which is ideal for a small gathering. Additionally, the headphones use 300mAh rechargeable batteries that have an 11-hour runtime. With its square ear cups and LED lights, Sound Off’s headphones closely match Silent Sound System’s appearance. On one side of the ear cups, next to the same channel switch, is a volume dial. A gray headband and leatherette ear cushions are further features of these headphones.

The Sound Off Bolt 2.2 Transmitter, which can accept audio from a Bluetooth source and wirelessly activate the LED lights on the headphones, is included in the set. They are also battery-powered, so you can have your private silent discos everywhere you go. 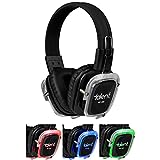 The Talent RF-309 is a worthwhile option if you’re seeking for portable quiet disco headphones. These headphones can be compared to Silent Sound System and Party Headphones in terms of usefulness and design. They also available in a single pack.

The Talent RF-309 has ear pads that can be adjusted and a headband that is cushioned with plush cushions. Through the on-ear controls, you can also adjust the volume and change channels. Three separate audio channels can be switched through by these RF-operated headphones. The Phase-Locked Loop (PLL) in the Talent RF-309 also maintains stable signal input and output for frequency stability.

You won’t need to keep your audio source close because these can receive audio signals from up to 500 meters away, allowing you to listen to music for ten hours. With merely the headphones on your head, you are now free to run around your neighborhood. Depending on your channel, the LED lights on these headphones can switch between three different colors. These lights can be utilized as a safety light when you’re out at night in addition to being wonderful for parties.

You will need to purchase a transmitter, though, in order for these headphones to function. Unfortunately, only the Talent TX-50RF transmitter is compatible with the Talent RF-309.