Phase problems, or the misalignment of two audio waveforms collected from the same source (for example, the top and bottom mics on a snare drum), are prevalent when recording instruments or real-world sound sources, and can also be caused by environmental factors during music production. First and foremost, we must comprehend what sound is and how it functions. The vibrating of molecules in the air produces sound, which is recorded by our eardrums and decoded by our brains. When you talk about phase, you’re referring to the position of sound waves in time.

Multiple sound sources can sometimes be found at the same time. Because of the temporal delay during playback, our signal aligns in a different phase on a given period when all sources reproduce the same sound at various times, resulting in phase cancellation. Timing differences between the source and the sound waves collected by each microphone, this is particularly common during multi-microphone recordings. Polarity is another factor that can cause phase cancellation.

Microphones are designed to function similarly to human ears. They also use a device called a transducer to collect the vibrations in the air. This transducer responds to vibrations and is pushed and pulled by the air molecules. Polarity is the pushing and pulling that occurs. When the polarity is inverted, the air is simultaneously pushed and dragged, resulting in phase cancellation as two opposing phases counter-position against each other.Let’s look at phase alignment plugins that might help you fix any phase-related issues you may encounter in your mixes. 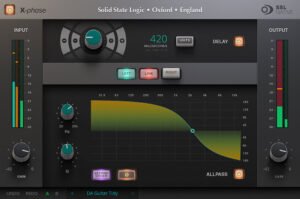 Signal cancellation occurs when two virtually identical audio streams are out of sync, resulting in phasing difficulties. Consider a situation in which the peak of one frequency coincides with the trough of another. As a result, they’re frequently heard on multi-mic recordings, particularly percussion.

When you blend the overhead mic with one or two close-up mics, it’s one of the most prevalent scenarios. When blending the top and bottom mics, the snare, for example, may sound thin or boxy. This problem arises as a result of electronics, cable length discrepancies, and other factors.

SSL Native X-Phase is an all-pass filter plugin that allows you to alter the phase of your input audio. You can make a track stay in phase control with another by applying a phase shift/offset at a certain frequency. When automated, exploiting this effect can also provide creative comb filter effects and modulation.

You can use X-Phase to pinpoint the exact frequency at which the audio signal is out of phase correlation meter. A surgically precise point with a high Q-factor or a broad stroke with a low Q-factor are both viable options for phase adjustments. Similarly, the Second Order switch toggles between the first-order (6 dB/octave) and second-order (12 dB/octave) filters. Furthermore, the user interface’s graph allows you to intuitively select the frequency and visualize its position on the spectrum for each other. It does not, however, include a frequency spectrum analyzer.

The delay button in the user interface’s top right corner adds latency to the entire transmission. By clicking on the Units button, you can specify the delay in seconds, milliseconds, samples, meters, or feet. Furthermore, the navigation controls on the left allow you to make accurate modifications in large or little increments.

You can change the phase of each channel in your stereo signal separately or all at once for phase adjustment. The Link mode, often known as mono mode, is the most prevalent because most recordings are mono. You might wish to process each channel separately if you’re altering a stereo signal from two mics or electrical sources. You can also invert the phase by pressing the phase-invert switch.

If you frequently record multi-channel audio, X-Phase is a useful utility plugin. With a few simple clicks, you can make fast changes to the audio phase and introduce lag throughout the full spectrum. The user interface is simple to use, and every parameter in the plugin may be automated. To generate innovative, thrilling phased-out effects, blend the processed sounds with a copy of the original signal. This is the Best Phase Alignment Plugin in 2022. 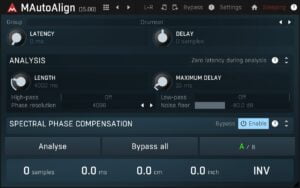 When you record something with more than one microphone, phase cancellation happens. Some people disregard it and keep the tracks boring, while others seek for delays manually, and yet others let MAutoAlign do the work for them and move on to the next task. Melda Production procured a fully automated phase alignment plugin with a bizarre algorithm that analyzes and corrects your tracks in real time, resulting in dramatically improved results of phase relationships. It’s set up to assess and fix phase in seconds with auto align, as well as estimate the best channel rotation to reduce cancellation.

Melda Production values user experience, which is why they’ve created an out-of-this-world user interface that allows you to feel as comfortable as possible with this plugin. You may completely modify and mold the UI to your liking, changing colors and patterns as well as resizing it while keeping it CPU-friendly.

MeldaProduction MAutoAlign can simultaneously encode mono, stereo, mid/side, and up to 8 surround audio channels, which is a fascinating feature. It could be employed in a variety of contexts, including music, films, video games, and virtual reality. This plugin provides automatic gain compensation to prevent ear damage, allowing for a much clearer A-B comparison and preventing you from assuming it sounds better or louder than it actually does. This features the “safety limiter,” a built-in brick-wall limiter that ensures everything stays under 0dB.

MAutoAlign is extraordinarily easy to use and fast, as it automatically identifies the sample delay of your songs and aligns them to perfection in seconds, in addition to its incredibly changeable GUI. To use MAutoAlign, simply load it and press the analyze button during playback. It will investigate all connected tracks and combine them.

MAutoAlign is a fantastic time-saving tool that corrects any potential phase cancellation in a couple of seconds. It’s as simple as pressing one button and letting it run, avoiding you from spending too much time adjusting and instead focusing on what needs to be done.

MAutoAlign is an excellent tool that can be utilized in a variety of situations, making it a great plugin to have and use on a daily basis, no matter what you’re doing. This is the Best Phase Alignment VST Plugin in 2022. The Phase Shifter W2324, an analog phase rotator hardware, is emulated by MAAT RSP Phase Shifter, which is augmented by today’s digital capabilities. It takes the analog gear’s exceptional precision and functionality to a new level by being entirely transparent, featuring double-precision internal processing, and allowing up to 360° phase rotation, zero delay, and a delta function. Let’s take a closer look at our important features area.

The RSPhase shifter’s delta mode is one of its most impressive and distinctive features. By adding the ability to use RSPhase as an FX plugin, we can make it even more adaptable to our workflows. Users can utilize this Delta option to change the stereo spread in a Mid/Sides process. To accomplish this, start with an MS encoder, then an RSPhaseShifter, and lastly an MS decoder at the end of the chain. This feature allows you to change the phase of both the Mid/Mono and Side/Difference signals, making it much easier to discover the ideal settings.

It looks as nice as it functions, as there is no time spent when entering the phase correction plugin. Its analog appearance makes it fun to work with and comfortable to use, in addition to being intuitive. The RSPhase Shifter has the same settings as its analog counterpart, but it also has its own special features, such as 360° phase correction, zero latency, and linear-phase response that preserves full transparency after use. RSPhase Shifter provides total transparency, dependability, and a broad range of phase correction options. Although it is not automatic, it lets you to rectify phase faults in your mixes, boosting low-end quality and adding depth without compromising mono compatibility. This is the Best Phase Alignment VST Plugins in 2022.

Precision Time Align from Eventide is a sub-sample delay that lets you move any trackback ahead or backward in time. Mix engineers and producers that frequently work with multiple layers on top of one other would appreciate this plugin.

Precision Time Align allows signals to be synchronized to microsecond precision, down to 1/64th of a sample. It can be difficult to record drums, an electric guitar cabinet, or voices with multiple microphones. While each microphone’s sound may sound nice on its own, putting them together can result in phase anomalies such as comb filtering (phased, hollow sound) or low-frequency attenuation. On a sample level, editing in your DAW can help with time alignment, but Precision Time Align is 64x more efficient.

The user interface of Precision Time Align leaves no mistake about how it works and what you have with waveform display. When you first launch the plugin, it immediately displays all of the options available to you in a self-explanatory, attractive graphic interface.

It was designed to be a precise tool that meets all user needs, particularly for surgical applications, as its name implies. You can synchronize signals up to 1/64th of a sample and conduct positive and negative delays with it. Inches, centimeters, samples, and milliseconds can all be used to calibrate the signal.

Precision Time Align from Eventide is a simple tool that is ideal for surgical usage in any case when precision correction is required. It enables users to quickly align and correlate several recordings in time, and it’s great for stereo inputs with phase cancellation issues.