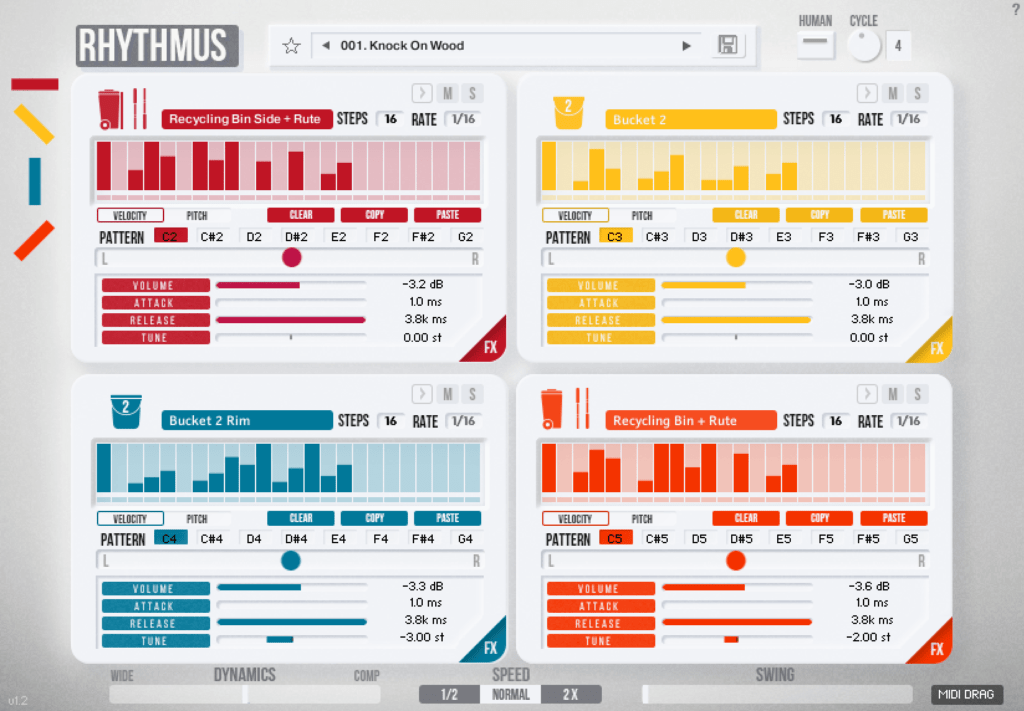 Designed for producers and composers of all genres. Rhythmus was built from the bottom up with ease of use in mind and features 4 dynamic and independent Sequencer Engines with 100 Sound Sources, offering an organic, novel, and unusual perspective on what percussion may be. Aside from the slightly unusual sound sources, the four sequencer engines that predominate the UI are quite outstanding and incredibly inventive. There is plenty of room for creating complicated rhythms in Rhythmus because each engine can have a distinct sound source used in a preset, and each engine can also have a different step and rate setting.

Both velocity and pitch can be sequenced, and each engine’s overall loudness, pan, attack, release, and tuning can be adjusted. Each engine has eight distinct pattern slots, which can be activated in a variety of creative ways using a combination of the MIDI mapping and the Cycle control (top-right of the UI). If you keep holding down a MIDI trigger, the latter enables the engine to automatically cycle through the patterns for each engine. As a result, Rhythmus makes it incredibly simple to create rhythmic variety after the patterns are set up.

Additionally, you may turn on the Human button to provide a small bit of random delay for more “human performance” realism. Other features include global control over dynamics, playback speed (1/2, normal, or 2x), swing, and swing. You also receive an outstanding FX page with distinct transient designer, distortion, overdrive, flanger, chorus, wah-wah, lo-fi, stereo width, reverb, delay, and EQ models for each sound engine. This page can be accessed by the color-coded bottom-right corner of each sound engine. So many different ways may be found to change the fundamental sounds.

There are almost 200 presets included with Rhythmus that expertly showcase the instrument’s remarkable capabilities. Some basic ideas here are not all that dissimilar from those in something like Sample Logic/Modern Soundiron’s Animated Percussion, so keen media composers or virtual percussion nerds may have previously seen them. Although MAP costs more than Rhythmus, it has a far larger sample collection and is possibly deeper. The sound quality of Rhythmus is not lacking, though, and media composers searching for some really useful percussion ideas may consider this to be a bit of a no-brainer given the pricing. With such a strong recommendation for their debut offering, Naroth Audio Rhythmus is worth a look.