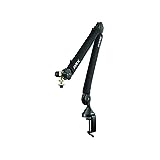 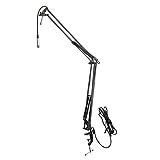 A mic stand is a must-have device for comfortable recording and work. After years of experimenting with various supports, I can confidently state that microphone boom arms are the most effective. The best microphone boom arms are made of high-quality, lightweight materials that are internally dampened for quiet operation. They rotate 360 degrees and allow even hefty microphones to be easily positioned. A good mic boom should feature a cable management system and a strong clamp.

To summarize, the Rode PSA 1+ is a sleek, simple-to-use, near-silent boom arm that is a significant improvement over its predecessor. Overall, if I had to choice between paying more for the premium model and saving money by purchasing the earlier model, I would opt for the former. The new features, in my opinion, more than justify the higher price.

Mic cable clips are fastened to them, suspending the cable above the fabric in mid-air. From the standpoint of sound isolation, this is fantastic news. There were scarcely any discernible sound changes in the mic when the cord was knocked or moved. Because of the fabric, if the cable is knocked against the arm, the resulting sound is muffled and practically inaudible. This is fantastic news for both streamers and podcasters, but the protective sleeve’s benefits don’t end there.

The Rode PSA1+ is a terrific investment for anyone serious about podcasting or streaming because it’s sleek, easy-to-use, and it records audio absolutely silently. This is the Best Microphone Boom Arm in 2023.

Square tubing for extra rigidity and strength, a hollow frame for the unobtrusive installation of microphone wiring, and a 10-inch XLR cable pre-installed within the arm for ease of use and convenience are just a few of the little but powerful characteristics of the MBS5000. The MBS5000 also has the option of permanent or removable fixtures, with a table mounted clamp to secure it to your preferred surface or bolting it down permanently.

This budget option microphone arm is meant to be manipulated while being used live, has no exposed springs, and is silent in its movements. This arm can support a hefty 3.5 pounds, so most microphones should be fine hanging from it. It’s also worth mentioning that this device features a ball-joint tablet surface, allowing you to attach an Android or iOS tablet.

Need something a little more small for your home studio setup because you’re short on space? The On-Stage MBS5000 is our recommendation. Thanks to its square-tubing structure, this professional articulating mic boom is quite sturdy, and it comes with a 10-foot XLR cable pre-installed inside for a clean and professional look. A C-Style clamp, which grasps surfaces up to two inches thick, and a screw-in flange mount for permanent desktop or overhead installations are included once again. All of this comes at a very reasonable price that represents great value. This is the Best Microphone Boom Arms in 2023.

The Samson MBA38 is the most affordable boom arm on the market today. Its internal springs and durable steel body are highly robust, and it’s easy to adjust quietly. It’s designed for radio, podcasting, broadcast, and streaming. With the C-clamp mount, you may quickly secure this boom arm to your desk, or use the flange mount for a more permanent installation. It has a generous horizontal/vertical arm reach of 38 inches and can accommodate microphones weighing up to 2.3kg (5kg), making it the finest boom arm for heavy microphones.

Samson has established itself as one of the major makers of low-cost recording gear. This heavy-duty boom arm is made of steel and is ideal for podcasting or narrating videos.Within the stand, internal springs have been installed. This suspension boom arms allows you to modify and position it in a live environment without fear of unwanted noise damaging the recording. The MBA38 is capable of supporting up to 5 pounds of weight. This is the Best Microphone Stand in 2023.

The Blue Compass Premium mic boom arm comes with all of the capabilities you’ll need for a successful recording session. The arm features a “all-tube” spring system and a hidden cable holder for a streamlined appearance. This one gets major bonus points for design. The arm has hand-tightened hinges that block out undesired noises during recording. The arm is built to work with Yeti and other broadcast microphones.

This mic boom arm is entirely compatible with all conventional shock mounts, allowing you to shift in and out as needed. In comparison to other boom arms, this one has a somewhat shorter vertical and horizontal reach of 32 inches. This could be a positive or bad thing depending on your configuration. If you have a stupidly deep and large studio desk, having a shorter arm means you’ll save more desk space, but it may also mean you’ll have to lean in.

If I were to be honest, locking the mount into specific positions can be a little tough, but this isn’t a major issue. The arm can handle up to 2.4 pounds of weight, which should be enough for most producers. But first, check the weight of your primary microphones. 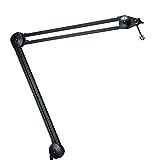 The Heil PL-2T Overhead Broadcast Boom has a sleek black style that complements your workstation. The arm alone can support microphones weighing up to 3 12 pounds. To help you install the microphone cable within the boom, the top and backplates can be removed. It doesn’t get much more straightforward than that.

Heil’s model, unlike some of the others on the list, uses internal springs that are hidden from view. That means there are no springs on the outside of the casing to worry about. That means you won’t have to worry about cable connectors slowing down your system. The boom arm’s stem is chrome threaded and may be locked into place. The little rotating tightener to secure the arm in place can be a bit tough to tighten down, which was a little issue for me. However, with a little patience, I was able to secure it in place.