In 2022, “lo-fi” (or “low fidelity”) is the umbrella word for the hazy aural aesthetic seen in genres including as lo-fi hip-hop, chillwave, and bedroom music. The greatest lo-fi plugins in 2022 do more than just mimic the idiosyncrasies and distortions of various tape recorders hardware unit and preamps. The most popular software offers a variety of options for quickly fuzzing up your sound.

The usage of audio elements that have been “degraded” in some way, such as oversaturation, pumping compression, pitch fluctuation, audio glitches, or a decreased bit rate, is usually what defines the sound of “lo-fi.” Today’s lo-fi has its origins in the DIY recording movement, which began in the 1970s and blossomed in the 1980s with the introduction of sophisticated home recording gear and technology such as MIDI.

There’s some misunderstanding regarding what a lo-fi plugin is. For the purposes of this essay, we’ll refer to it as any plugin that allows you to add analog-sounding character, grit, and texture to your music. XLN Audio RC 20 multi-effect plugin remains a popular choice for lo-fi producers more than half a decade after its release. You can utilize the “Noise,” “Wobble,” “Distort,” “Digital,” “Space,” and “Magnetic” modules to design your sound. Each one features a “Flux” control for introducing unpredictability, as well as a dry/wet slider to fine-tune the amount of signal affected.

The retro color comes with some nice presets, but the real magic happens when you play around with the various modules on each of your sound sources. The bottom panel, which has gain and width controls as well as a simple but powerful EQ with high and low shelves for lightning-quick adjustments, is the most underappreciated feature.

First and foremost, RC-20 is one of the most comprehensive audio coloring plugins available. It comes with everything you’ll need to make a Lo-Fi mix. Furthermore, the plugin features a modular workflow, albeit the sequence of the modules cannot be changed.

There are a variety of textures in the noise area, ranging from ordinary vinyl crackle to “Apollo” space noises. A few of the modules are for enhancing the boom and flutter of a vinyl or tape record. We also have an analog distortion types as well as a digital bit-crusher. The fact that most of the modules contain a low-pass and high-pass filter is intriguing. As a result, you may only have some analog grit in the bass while the rest of the track remains beautiful. A Space module can be used to create retro-sounding reverb to your music. A “Flux Engine” slider on each module allows you to create flavor variations.

RC-20 comes with everything you’ll need to add color to your songs and make them sound like they’re from the 1960s. Often, you’ll want your song’s opening or outro to sound retro, and this plugin allows you to accomplish it by automating the Magnitude slider. This effect was really fun to use in conjunction with the master EQ section, which is also influenced by the slider.

RC-20 is a comprehensive plugin for creating Lo-Fi tracks with fantastic presets that is well worth checking out. It’s worth noting, though, that the plugin uses a lot of CPU. So, before you buy the plugin, make sure to try it out on your machine. This is the Best Lo-Fi Plugin in 2022.

Sketch Cassette 2 from Aberrant DSP is a great choice if you want to replicate the warmth, warble, and noise of an old cassette tape. While the initial iteration was fantastic, the second iteration has been improved with a more streamlined interface and a few additional back-end enhancements. The plug-in focuses on all of the retro medium’s distinctive and quirky characteristics. Add some life and fuzz to your boomy percussion breaks or barren piano chords with Sketch Cassette 2.

The Sketch Cassette 2 plugin comes with a number of useful presets to get you started, but it’s just as simple to tweak when dialing in your own sounds. Cassette 2’s plugin makers have gone to great lengths to include everything from dropouts to tape skipping. You can change the tape deck’s flavor with a single click, and utilize the two meters to monitor your audio levels for sound design. You can take your sounds into a more experimental area by pushing the tape machine plugin’s parameters to their limits.

Aberrant DSP was able to expand this tape machines plugin even further by including an FM mode, which allows users to modify wow and flutter parameters like audio artifacts. When you add tape filtering and compression to the mix, you’ve got yourself a tremendously adaptable plugin that can provide practically any unique aspect of lo-fi music.

Of course, one of the things that many producers find surprising about this plugin is how inexpensive it is. Sketch Cassette 2 is a wonderful alternative if you’re looking for low-budget lo-fi craziness. This is the Best Lo-Fi VST Plugins in 2022. 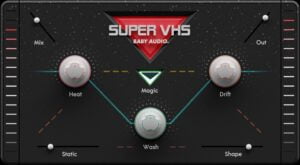 baby Audio Super VHS is a multi-effects plugin with a small number of controls. As you can see from the image, Super VHS keeps the user interface on the simple side. It does, however, have a few tricks up its sleeve. There’s a saturator, a reverb, a tape wobble effect, tape saturation, chorus, noise, tape warble, and bit-crusher, and each parameter controls a different effect.

Saturation is controlled by the Heat knob, which goes from analog-style warmth to substantial distortion. Wash is a unique type of reverb section that sounds old but isn’t like a spring reverb. Nonetheless, when used in moderation, it sounds intriguing. Then there’s the Drift knob, which adds audio pitch wobbling. You may also use it in conjunction with the Mix slider to create a flagging effect.

Static, a noise generator, is on the bottom left, and the bit crusher is on the right side of the Shape slider. Finally, the “magic” button in the middle of the interface activates an analog chorus effect (like Roland Juno chorus) that generates a wide stereo sound. The chorus on pads and keyboards, in particular, was fantastic. The Mix slider, of course, may be used to adjust the chorus volume.

The Super VHS plugin from Baby Audio is a great alternative if you’re looking for a simple lo-fi VHS plugin. The interface of the Super VHS has three basic controls that make it easy to operate. Heat, Drift, and Wash are the three controls. Of course, the smaller sliders around the major knobs can be used to fine-tune any of the Super VHS plugin’s finer characteristics.

Decimort 2 is a bit crusher that gives you total control over the sound, allowing you to replicate any antique sampler you choose. D16 Decimort 2 concentrates on recreating the signal path of every conversion circuit at the best quality possible, with a tagline that reads “the highest quality low-quality effect you can purchase.” Unless the plugin intentionally imitated alias, the result is a completely alias-free output.

The D16 Decimort 2 is a cutting-edge bit crusher. It specializes in deteriorating sounds by lowering digital information in ways that make them pop. The antique samplers that musicians used to make their tracks contributed a lot to the flavor of early hip-hop and electronic music. These vintage instruments had limited storage and resolution, but they had their own distinct sound. It allows you to go back in time and gain regulated access to the identical digital artifacts. Decimort 2 allows you to replicate almost any old AD/DA with options for quantization depth, dithering, and resampling frequency response.

The major control for adjusting the resampler is the big Frequency knob. The Jitter knob, on the other hand, is intriguing; it allows you to apply randomization to the resampling for sonically stimulating harmonic distortion. You can also apply an analog-style filter either before or after the effect. In terms of the other aspects, delving into dithering and quantization would be beyond the scope of this paper. However, you may use them to add noise and dynamic bit-crush to your audio to make it sound more like a classic AD/DA conversion. Finally, the Anti-Aliasing switch activates anti-aliasing.

This is definitely the best way to go if you want to experiment with your bit-crusher to obtain the precise sound you want. If you prefer analog grit, the pre-amp gain at the top left is also beneficial. Overall, this plugin is capable of producing everything from old fat sounds to aural mayhem. 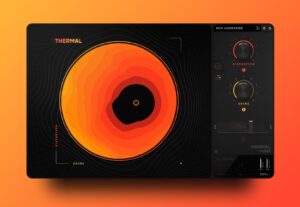 Thermal from output is a saturation plugin that will completely change the character of your samples and instruments. Each level contains its own filter section for adjusting the harmonic character of your sound, as well as bitcrush, modulation, and time-based effects such as delay and reverb.

The output thermal isn’t your typical distortion plug-in. Thermal is filled with features for smashing, mangling, and crushing audio in endlessly inventive ways, and it’s designed for advanced sound creation applications. All of thermal’s parameters can be controlled via an expansive and intuitive user interface. Over 15 analog and digital distortions can be stacked, shaped, and filtered, and nine built-in effects can be used to go deep into signal manipulation. Map any of thermal’s controls to your midi controller for real-time interaction, then use the circular xy control to morph between distortion parameters. Thermal sounds great on any source, including drums, vocals, guitars, bass, and keys, and it provides quick inspiration. Thermal’s library of 250 amazing presets wowed sweetwater’s sound designers; they’re great as is and serve as a great starting point for creating unique effects. Take it from us: heating up your recordings with the output thermal multi-stage distortion plug-in is the best fun you’ll ever have!