Harmonizer will provide you with a real-time or processed audio input mechanism. You’ll be provided a set of parameters to produce harmony as soon as your audio stream passes through the Harmonizer. Your signal will be duplicated by the engine, and the pitch of that signal will be changed by you.

You’ll be able to magnify that signal several times depending on the Harmonizer you choose, resulting in a large choral sound. A few harmonizers, similar to vocoders, allow you to enter chords through MIDI. You won’t be tied into the Harmonizer’s parameters this way, and you’ll be able to alter chords in real time using a midi keyboard controller or your DAW’s piano roll.

The best harmonizer plugins will enable you build good-sounding harmonies with ease and use any number of built-in effects to get the desired result. As a result, we’ll show you the best harmonizer vsts on the market in this post. 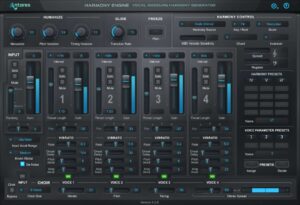 Harmony Engine allows you new ways to construct the harmony parts you hear in your head, whether you’re an experienced arranger, a songwriter looking for the perfect backup vocal, or a producer experimenting with novel effects. It has a number of control options, ranging from entirely automatic to individual note control.

For realistic or extreme effects, Harmony Engine includes four high-quality harmony voices with independently configurable vocal character, vibrato, and pan settings. Our Choir vocal multiplier has five channels, allowing you to split any harmony voice into 2, 4, 8, or 16 distinct unison voices. Harmony Engine comes with everything you’ll need to create lush, convincing harmonies. Create your own voice arrangement note by note, use your MIDI controller to perform harmonies, or simply choose the chords and let Harmony Engine handle the rest.

The Auto-Key plug-in, which is designed to save you countless hours in the studio by automatically detecting the key and scale of your music and delivering that information to Harmony Engine with a single click, is also compatible with Harmony Engine for music production.

Harmony Engine gives you the tools you need to create any vocal arrangement you can think, with four separate harmony voices, a number of customizable harmony generating modes, and humanization elements for more realistic sounding performances. This is the best Harmonizer VST Plugin in 2022.

The world’s first digital effects processor was the Eventide H910 Harmonizer. The H910 may be heard on countless groundbreaking works by musicians ranging from AC/DC to David Bowie to Frank Zappa, thanks to its unique blend of pitch shifting, modulation, and delay. Nothing else comes close to it in terms of sound.

Eventide’s H910 Harmonizer is a renowned piece that faithfully reproduces the original H910 analog processor in every way possible, including the hardware’s occasional errors. Digital processors did not exist before to the 1970s. Until 1971, when the DDL (Digital Line Delay) was introduced, studios were packed with analog. In the development of H910, Eventide and Lexicon processors were used as the foundation. Despite being the first digital processor, only the delay was digital; the rest was analog, which explains why it sounded so analog.

The H910 Harmonizer is simple to operate. You’ve got the standard Input and Feedback knobs. The digital version adds an envelope, dry/wet output levels, and a hold button to the original’s glide knob and three pickers, giving it a little more sustain time.

Keyboard and Envelope pitch control modes, as well as an Output 2 Delay Group and a Mixer, have all been included to this edition. This H910-EKD (Envelope/Keyboard/Delay) allows the plug-in to respond even more quickly to your sound. Using new mixer controls, you may play musical pitch offsets and blend in a second delay line for extra stereo sound, thanks to the reconstruction of the original piano-style keyboard remote control. The new envelope follower bends the pitch using the input signal. This is the best Harmonizer Plugin in 2022. 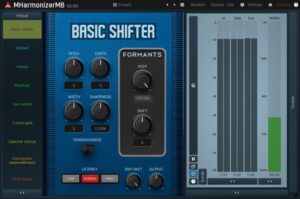 MHarmonizerMB by MeldaProduction is a pitch shifting and multi-voice harmonizing plugin that enables you perform like multiple artists at the same time. It adds bass drum subharmonics, widens or enriches records, and much more. MHarmonizerMB is the most versatile harmonizing effect on the market, with numerous harmonizing algorithms, up to 120 voices, formant modification, and features like strumming.

This multiband harmonizer has six bands of harmonies to choose from for producing complicated harmonies. When you first use the vst plugins, you’ll see a simple set of controls and pre-made patches that are common in harmonizers, such as pitch shifter and octaves.

For each band, you must first set the crossover frequencies and kinds. Analog, Mid/Side, and Linear-Phase are among the nine types of crossovers available. You have a collection of parameters to form a crossover type the way you want it when you choose it. Slope, level, transients, and other specific factors can all be tweaked. The settings you can change will be determined by the crossover you select.

It’s time to head to your band panel after you’ve chosen your crossovers. Each band has its own set of criteria that distinguishes it from the others. Each includes four settings and strumming choices, allowing your vocals to sound like guitars – sort of. After that, modulators are the logical next step.

MeldaProduction is known for producing high-quality products at a low cost (many of which are free). MHarmonizerMB is a comprehensive bundle when it comes to harmonizing. The fact that you can modulate practically every parameter within the plugin, even the crossovers, demonstrates how versatile it is. Octavox’s time-based diatonic harmonizer technology will help you improve your composition skills. Octavox is a motivating tool that accepts any incoming tones—including drums—and generates up to eight voices according on the key and temporal interval selected. Octavox is a hardware effects processor that uses technology from our flagship H8000 hardware effects processor to take your melodies and ideas to new heights. Create new rhythmic sequences by stacking harmonies, widening instruments, and creating innovative rhythmic sequences. Octavox includes more than 70 presets to increase your creativity and productivity, whether you’re an electronic musician, singer/songwriter, or guitarist.

The concept of Octavox is based on the H8000 hardware processor’s technological advancement. It has controls that are intuitively built to allow you to alter its parameters and write in your desired values with ease. You don’t have to be a guitarist, musician, or anything else musical to enjoy the Octavox. That is how fluid it is.