Peak clipping is a popular technique for creating smoother and resonant masters by a mastering engineer. Clippers are dynamics processors that are used to manage transients or create harmonic saturation as a industry standard. Clippers use distortion instead than preventing it, like limiters do. Furthermore, to a certain extent, they frequently keep the tone and punch of a mix better than limiters. People frequently think clipped masters sound “brighter,” “thicker,” or “richer” because of the distortion. Exciter plugins act similarly in that they induce distortion to add clarity and “sheen.”

A clipper is an audio plugin that prevents signal peaks from exceeding certain thresholds. These plugin units can help keep your overall sound level in check and avoid audio clipping by “clipping” the signal peaks. When a audio signal exceeds the acceptable threshold level, the clipper “clips” off the peak of the waveform, thus flattening it until it falls below the threshold. For each new peak that surpasses the threshold, the process is repeated. 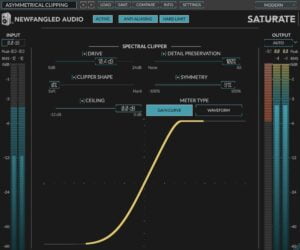 The Spectral Clipper algorithm used in the Elevate Mastering Limiter is known as Saturate. The two controls on Saturate hide a complex signal processing engine that can overload a signal without compromising the tonal balance, no matter how hard you push it. Up to 24 dB of overdrive can be added without sounding “tubby” or muffled. You may also use the SHAPE slider to seamlessly transition between harsh clipping algorithms and the mathematically smoothest curve imaginable. Overdrive individual tracks or your entire mix with Saturate.

Many people want their best clipping plugin to have a lot of features, while an equal proportion prefer a simple utility that does the job. If you’re one of the latter types, the lack of a cockpit-style UI will be a pleasant difference from the majority of the items on our list. With a single slider dubbed Clipper Shape, Saturate claims to be able to give you anything from a harsh clip to the smoothest curve possible, and its outstanding sound backs up this claim.

The plugin’s driving gain is a whopping 24 dB. You’ll probably use significantly less for things like mastering, but if you like highly distorted bass or guitars, Saturate has you covered and then some. Furthermore, because this plugin is a spectral clipper, it ensures that no matter how much drive is applied, the sound will remain tonally consistent.

The output gain can be changed to Auto above the output peak meters as a sound designer. It will automatically adjust the output volume gain and ensure that it does not exceed 0 dB. Having this function switched on makes mastering considerably easier and alias-free, unless you’re alright with manually verifying the clipping level to confirm.

While Saturate’s default sound is pleasant and smooth, you won’t have any options like saturation parameters or clipping threshold control if you want to experiment with asymmetric distortion or even a different symmetrical shape. So, for a similar price, you get a lot more functionality. However, we recommend downloading a trial, listening to how it sounds, and then purchasing at this affordable price tag it if you enjoy it. This is the Best Clipper Plugin in 2022. 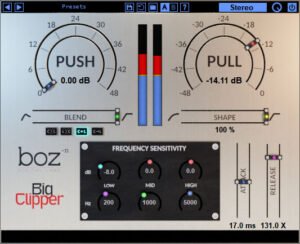 Big Clipper combines a clipper and a regular limiter in four blend settings to provide an entirely new level of dynamics processing. An input gain (Push), a threshold (Pull), and a Shape parameter are all available on the interface. The Shape fader allows you to modify the hardness or softness of your clipper input signal. At the bottom right of the interface, you’ll see the Attack and Release faders, which you won’t find in any of the other clipper plugins. The reason for this is that those faders are part of the limiter algorithm. Overall, the user interface is detailed yet not overwhelming.

The crossover blend mode divides your audio into two frequency range, each with its own limiter/clipper. Clipper | Limiter and Limiter | Clipper are the two crossover blend modes offered. Each one arranges the two processors in the sequence specified. The Blend fader can be used to set the crossover frequency (from 100 Hz to 20 kHz). The limiter and clipper can be routed in parallel or in series. The Blend fader functions as a threshold offset for the Clipper in series mode. So, if you set the Pull knob to -16 dB and the Blend Fader to 6 dB, your Clipper will only have a -10 dB threshold.

Big Clipper can be used in stereo, mid/side, mid only, and side only modes. The plugin processes the mentioned signals independently in the first two modes. It’s worth noting that you can’t alter the mid and side signals separately in a single instance of this plugin. For each, you’ll need an instance.

The amount of sound from each of the three bands that enters the signal detector can be adjusted in this frequency spectrum. It’s not quite multi-band, but it lets you control how saturated or clipped each band is. It’s beneficial when clipping a whole mix and don’t want the kick to introduce too much distortion, for instance.

The combination of a limiter and a clipper has been known for a long time, but it’s uncommon to utilize them in specified frequency bands. And it makes sense when you think about it. The features, however, come at a hefty price for a clipper. So, try it out and see if the features are worth it – keep in mind that the concept is better suited for mastery than any other application. This is the Best Clipper VST Plugin in 2022.

NEVO is SoundSpot’s new monster clipper, created by our in-house audio experts to give you the ultimate peak control while mastering audio or boosting virtual or hardware instruments. NEVO isn’t your average clipper; it’s packed with features and controls that will leave you speechless with its sonic prowess while remaining simple to use and absolutely inspiring.