In-the-box mix engineers can use channel strip plugins to give recordings that may have come from several sources a consistent sound. And while some emulate the sound and sensation of fiddling with renowned consoles’ knobs, others take a glimpse into the future of mixing and recording.

To replicate how audio would be processed while being recorded on an analog desk, you need Channel Strip plugins. They are valuable because they provide a variety of processors, such as gate/expander, compressor, EQ, de-esser, and others, which eliminates the need for other plugins in the future. In other words, they assist you in giving your music a seamless, pre-mixed feel. You can print your multitracks and begin signal processing and mixing after using a channel strip plugin to get a nice sound. Additionally, bus tracks and even mastering can be done using channel strips. Some plugins have a distinctive sound that can give your productions a ton of character. 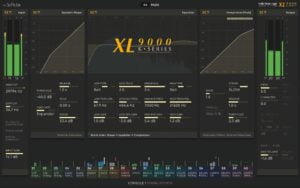 For Softube’s Console 1 Hardware/Software Mixer, the Solid State Logic XL 9000 K-Series is a plugin emulation of the renowned SSL XL 9000 K. Softube is renowned for its incredible plugin replicas of expensive hardware. Softube’s Solid State Logic XL 9000 K-Series channel strip plugin is an outstanding example of the company’s modeling and plugin programming prowess. This digital replica, which was created in partnership with SSL experts, is the closest thing we’ll come to the wide and smooth sound of the “genuine deal.”

A model of SSL’s Variable Harmonic Drive (VHD) for more drive and saturation, extended gate and compressor functions, and a gorgeously clean, smooth, and natural EQ are all included in this channel strip. EQ has four parametric bands (Low, Low Mid, High Mid and High). The two middle bands are fully parametric, and the low and high bands can be configured as bell, cut, or shelving filters. The compressor provides parallel control (from 0 to 100%) and constantly configurable ratio, threshold, attack, and release parameters for simple parallel compression.

Users can adjust the signal’s saturation level in the VHD portion of the channel strip. This part genuinely adds the warmth of the vintage analog to the digital audio world, from tube to transistor harmonic distortion. Given how spotless the original SSL 9000 consoles were, this function is tremendously helpful.

Peak and RMS detection modes are switchable on the Softube Solid State Logic XL 9000 K-Series compressor, enhancing the performance of this potent plugin. The XL 9000 K’s Shape section’s gate unit is very adjustable. Users can rapidly and precisely adjust the dynamic gate’s range and hold settings by using the Punch and Sustain knobs. This is the Best Channel Strip VST Plugin in 2022. 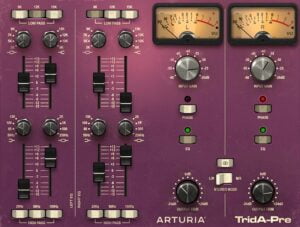 The popular Trident A-Range console channel strip is emulated by the Arturia TridA-Pre plugin. The channel 3 of Flemming Rasmussen’s 1976 Trident A-Range console from the Sweet Silence North studio in Copenhagen, Denmark, is precisely replicated digitally in this particular piece. Like the original gear it imitates, Arturia’s TridA-Pre is very musical and has a lovely aural depth eq section. Only 13 consoles were ever produced, but now everyone can use this unique channel strip thanks to the Arturia TridA-Pre plugin!

There is no dynamics part in the Arturia TridA-Pre, in contrast to the other plugins on this list. Instead, this Preamp/EQ combination is outstanding enough to compete with channel strip plugins that are thought to have significant functional advantages. With this user-friendly stereo channel strip plugin, Arturia’s revolutionary True Analog Emulation technology brings the character from the heyday of recording to contemporary DAWs. This plugin matches the renowned hardware in every way, from the GUI to the sound character. Utilize the preamps creatively to achieve program-dependent compression and harmonically rich analog distortion. The recognizable tone starts here.

Utilize the stereo EQ to further sculpt this tone. Each channel has four bands with four switchable frequencies (high, high-mid, low, and low). Cut or boost by up to 15 dB on your own, or link them together. Instead, this plugin provides mid-side equalization, which the original hardware lacks. This is the Best Channel Strip Plugin in 2022. A channel strip plugin called the Eventide UltraChannel contains an entire strip’s worth of famous Eventide effects. For digital audio workstations, this high-precision channel strip serves as an all-in-one, industry-standard mixing tool. This flexible plugin has 8 fantastic modules. Let’s talk about how each one works. The input module offers the option to flip phase and modifies the signal’s overall input.

If the signal falls below the predetermined threshold, the Gate will muffle it. It can be activated by a sidechain signal from the outside world. The Compressor is a typical compressor with sidechain and de-essing capabilities. When dialed in properly, the O-Pressor, which is a descendant of the company’s Omnipressor, offers a ton of character and incredibly harsh compression.

For maximum control and experimentation, Eventide’s FlexiPath routing technology allows processors to be arranged according to desired signal flow. To change the signal path’s order, just drag and drop modules. Finding the ideal preset from the more than 200 available can produce the best tone, or you can spend more time customizing each parameter to your preferences. Overall, this channel strip’s incredible sound quality and simple, user-friendly design make it incredibly adaptable. The EQF-100 parametric passive equalizer and the TLA-100A compressor are combined in the Softube Summit Audio Grand Channel to provide a potent and adaptable channel strip plugin. The Summit Audio Grand Channel from Softube is a very adaptable channel strip that can handle most of your mixing requirements. This plugin’s sound has been meticulously modeled to closely resemble the excellent original analog hardware it seeks to imitate. Both the EQ and the compressor have independent bypass controls, and the plugin also has a switch that allows you to order the signal chain so that the EQ comes before the compressor or vice versa.

The EQF-100 Full Range Equalizer on the Grand Channel features a remarkable 4-band EQ section as well as high- and low-pass filters. The EQ of this plugin sounds fantastic, with a huge bottom end, the silkiest top end, and a beautiful mid-range control in between. With settings for gain, gain reduction, attack/release, and internal/external sidechain, The Grand Channel’s TLA-100A Compressor is very simple to use. Even the weakest tracks are powerfully compressed by the TLA-100A’s clearly analog compressor, which gives them an authoritative presence.

The Grand Channel features additional contemporary controls like Parallel Compression, Saturation Control, and Low Cut Filtering on Input or Detector in addition to the precisely modeled EQ and compressor.